The record-breaking flight from Nagoya, Japan to Kalaeloa, Hawaii by Andre’ Borschberg in Solar Impulse had more difficulties than were immediately apparent to even the most involved observer.  During the first climb out of Nagoya, some of the cells mounted behind each motor experienced overheating, now attributed to over-insulation.  High-density foam packed around the cells was apparently too effective for even the freezing temperatures at altitude and caused the batteries to become warmer than desired. 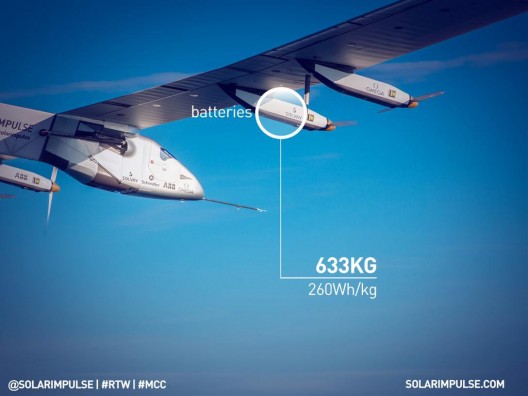 Location of Solar Impulse batteries – one pack behind each motor.  That’s the combined weight, each individual pack being 158,25 kilograms or 348,15 pounds

As explained on the Solar Impulse web site, “The energy collected by the solar cells is stored in lithium polymer batteries, whose energy density is optimized to 260 [Watt-hours per kilogram]. The batteries are insulated by high-density foam and mounted in the four engine nacelles, with a system to control charging thresholds and temperature. Their total mass amounts to 633 [kilograms] (1,393 pounds), or just over a quarter of the aircraft’s all-up weight.

This sawtooth profile allowed the airplane to climb in the sunshine and descend in darkness, using less power and conserving the cells so Solar Impulse could greet the dawn with at least partially charged batteries. 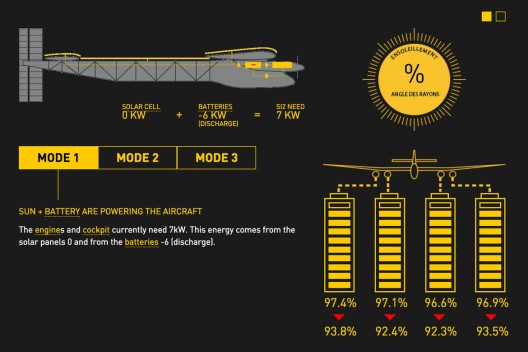 What the public could view during the flight, among other data

BatteryBro.com, a commercial operation which wholesales 18650 cells has a technically astute writeup by Anton Doos, one of the group’s cofounders, about the batteries on board HB-SIB.

“Energy storage represents the plane’s primary inefficiency, but also is a very achievable goal to improve upon. [Bertrand] Piccard has this to say on the state of battery technology for aircraft:

“‘The batteries we have used have been specially developed for optimal maintenance but are still 10 times heavier than kerosene. I would imagine that we are still 20 years away from attaining parity on this point.’”  CAFE Blog readers would love to see a more optimistic projection, but even modest improvements in energy density and pack weight are welcome.

For instance, Solar Impulse 1 used Kokam batteries with an energy density of 243 Watt-hours per kilogram.  Solar Impulse 2 flies with Kokam batteries  with an energy density of 260 Wh/kg., a modest gain, but significant out over a dark ocean.  Both aircraft used battery housings designed and built by Air Energy, a German firm.  The four battery packs were housed in the same insulating materials used in the cockpit to protect the pilot from temperature extremes. 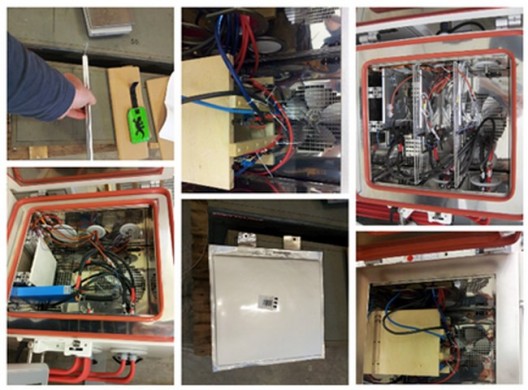 Commenting that the four 8-kilowatt motors are operating at a level that does not allow for errors, the site explains the choice of Kokam pouch-type cells used in the Solar Impulse.

“This solar-powered aircraft Solar Impulse uses four main lithium-ion batteries, each containing 70 lithium-polymer cells. It does not use a commodity cell like the 18650 that Tesla uses. There are several reasons, foremost being weight. An 18650 battery is in a steel housing, and a lithium-ion polymer battery like what is in this aircraft or in a cell-phone is housed in a soft, thin, flexible material. That is why nearly all drones, RVs, and electric planes use polymer (soft-packs). The polymer pack used by Solar Impulse is completely custom-built.”

Battery University, another on-line resource, has a brief history of pouch-type cells as used on Solar Impulse.  Its main benefit is weight savings, but the lack of a metal enclosure as in a cylindrical cell requires the use of some form of protective housing for the pouch or pouches.  Despite this the pouch cell attains 90-95 percent packaging efficiency, the highest among battery packs.  No standard pouch cell exists like an 18650 battery – each manufacturer designing its own version.

The batteries operate at a high voltage range of 210-304.5 Volts DC, which must generate some heat of its own.  Batteries have a total capacity of 38 kilowatt-hours. (Corrected July 15.)

Solar Impulse’s blog says their new Kokams are “particularly revolutionary,” in having a new chemical composition that has improved the oxidation issue which ages batteries and causes them to lose efficiency.   This technology is two years ahead of the industry, according to the blog, and “allows Solar Impulse to have batteries able to guarantee 2’000 flight hours, versus 500 in HB-SIA’s case.”  To gain energy density, Kokam added Monoflourethylencorbonat solvent developed by Solvay Chemicals.

The 70 cells in each battery pack don’t work well in extreme heat or extreme cold, and the insulation made by Bayer Material Science is intended to help maintain an optimum temperature of around 25°C (77°F – or around room temperature) inside the motor gondolas.  This involves an active heating mechanism to counter the effects of low temperatures at altitude, -40.5°C (-40.9°F) at 28,000 feet and an even more grueling -44.4°C (-48°F) at 30,000 feet, which the airplane exceeded on at least one climb.

According to Solar Impulse, each battery pack is an independent element, but a balancing controller can transfer power between cells in case of motor failure.  Each battery is fed by a particular solar panel associated with a given motor.

Monitoring available to the public did not show the battery temperatures during the flight, but did show the overall energy available from each pack in percentage of the total potential for that pack.  Some observers asked questions about one of two packs that seemed to lag behind the others.  Whether this was a function of temperature issues is unstated at this time.

Our hopes are with the Solar Impulse team as they sort out the heating issue, perhaps in time to meet the weather window that will allow their flight from Hawaii to the U. S. before summer’s end.