SolarStratos, a feather-light 450 kilogram (990 pound), solar-powered airplane, lifted off for the first time on May 5 in Payerne, Switzerland.  Considering its 24.9 meter (81.69 feet) wingspan, the airplane shows designer Calin Gologan’s ability to squeeze performance from every gram of structure.  It flies nicely, too, with test pilot Damian Hischier enthusing, “The plane is very nice to [fly].  [Its] reactions are healthy, and we see that it was well designed.” 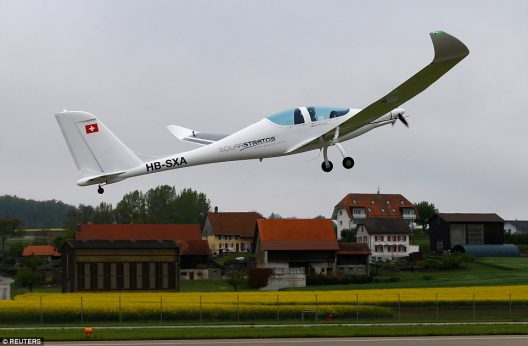 Sharing Payerne Airport with Solar Impulse, SolarStratos represents a different kind of adventure, ready to make five-hour flights to 75,000 feet (two hours up, five hours down).  Such flights can carry a pilot and scientific measuring equipment, or for those lucky enough to have the price of admission, a passenger.  Passengers on this high stratospheric journey will need to wear a pressure suit, and undoubtedly undergo hours of training on how to behave at such altitudes.

The Pulse reports, “Until now, reaching the stratosphere has required large quantities of energy or helium.  (Editor’s note: now it will only take a sunny day.)

“Reaching an altitude of 25,000 meters (82,000 feet) will pose huge technical and human challenges, SolarStratos points out on its website.

(Editor’s Note: Calin Gologan, the plane’s designer, supplied this longer video this morning, May 6.  It is in French, but most readers will get the idea.)

(He also sent this link, which includes this additional video.)

“The plane and pilot will also be subject to temperatures as low as -70 degrees Celsius (-94 degrees Fahrenheit), it said.

“And for weight reasons, the aircraft will not be pressurized, forcing [Raphael] Domjan to wear a spacesuit, meaning he will not be able to get out of the plane using a parachute in the case of an emergency, SolarStratos said.” 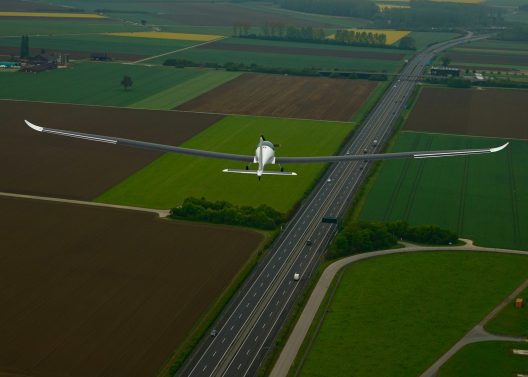 SolarStratos explains, “With this step completed, we can look forward to the next adventures with peace of mind. Of course, the road to flying at very high altitude is long, but we are confident of getting there. The intention is to get there step by step with confidence.”

Raphael and his co-pilot, Thierry Plojoux, will perform more flight tests, “so that we can demonstrate the aircraft’s flight capabilities at a major event in Quebec in June.”

The CEO of SolarStratos Roland Loos, appreciates the progress his team has made. “We are particularly pleased to have reached this crucial stage in the development of our project.”

Raphael Domjan has excellent solar eco-adventure credentials, having helmed PlanetSolar, the largest solar-powered boat in the world, around the world.  His enthusiasm for saving the planet matches that of his Payerne neighbors, Bertrand Piccard and Andre’ Borschberg, pilots of the Solar Impulse.  The sun shines brightly on that corner of Switzerland, indeed.

(Addition; May 8, 2017.)  Calin wants us to know that The manufacturer of The aircraft is Elektra Solar GmbH ( Elektra-solar.com) a Merger of PC-Aero and Elektra-UAS , and at same time A spin-off from DLR ( German Aerospace), Institute of Robotics and Mechatronics.

He adds, “We work very close together with The DLR for Autonomous flight, payloads and flight simulation.  There is also a bilateral frame Agreement between our company , DLR and SolarXploreres SA.”  Calin’s a busy man: “I’m at the same time The CEO of Elektra-Solar and a Shareholder of SolarXplorers SA in Switzerland.”