Brazil and Paraguay join the few nations which have sent an electric aircraft into flight with the introduction of the Sora-e, an attractive two-seat light sport aircraft.  The 8 meter (26.25 feet) wingspan plane incorporates a Slovenian motor, Korean batteries and an American propeller, giving it a truly international flavor.  The two countries share a joint venture firm, Itaipu Binacional, building and developing the airplane and its future variants.

Pesquisa FAPESP (Investigation Sao Paolo Research Foundation), an online magazine dealing with various sciences, announced the first flight of a new, two-seat, electric-powered airplane.  The Sora-e’s initial flight will lead to a testing program that will eventually have the plane up for 90 minutes and reaching a cruising speed of 190 kilometers per hour (118 mph).

Designed by ACS-Aviation of Sao Paolo and built by ACS and Paraguay’s Itaipu Binacional, Sora-e is an all-carbon-fiber machine with seemingly excellent visibility.

The video shows the first test flight taking place at Hernandarias, Paraguay on June 23 and ACS aviation engineer and pilot Alexandre Zaramella trying out the cockpit before takeoff.

He and another engineer remove the motor cowling so Brazilian Itaipu director-general Jorge Samek can view the two-motor power system.  He says, in a central soundbite, “We started with cars, with utility vehicles, with trucks and now we’re working with planes and buses to show that, yes, it is possible to use substitutes to fossil fuels to avoid carbon emissions that cause greenhouse effects.”

Fittingly, the airplane could be charged by Paraguay’s Itaipu Dam on the Parana River which divides the two countries, making it a clean energy success all around.  Itaipu Dam is the world’s second biggest hydro-electric dam by maximum capacity and is run by Itaipu Binacional. 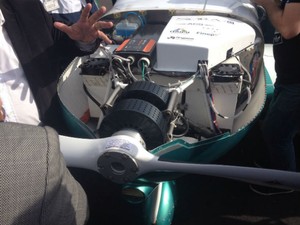 According to Pesquisa FAPESP, “The Sora-e has two electric engines, 35 kW each. They are the Enrax model supplied by Enstroj of Slovenia. The power comes from six polymer lithium ion battery packs for a total of 400 volts. The batteries were assembled by ACS itself using cells made by Kokam of South Korea. The airplane uses a fixed pitch propeller made of wood and carbon. It was developed by ACS and Craig Catto of California. Catto is one of the most acclaimed makers of propellers for experimental airplanes in the world. With this configuration, the ACS electric airplane climbs at the rate of 1,500 feet per minute and reaches a maximum speed of 340 km/h (210 mph) with a range of 1 hour and 30 minutes, traveling at 190 km/h (118 mph).”

“We started with cars, with utility vehicles, with trucks and now we’re working with planes and buses to show that, yes, it is possible to use substitutes to fossil fuels to avoid carbon emissions that cause greenhouse effects,” the Brazilian Itaipu director-general Jorge Samek said after Sora-e’s inaugural flight.

“’Today, to move the fleet of automobiles in Brazil, we burn energy equivalent to what 9.3 Itaipus hydroelectric dams generate in a year. If the fleet were electric, 1.5 Itaipus would meet the demand,’ says engineer Celso Novais, the Brazilian coordinator of the Itaipu Binacional Electric Vehicle Project.” 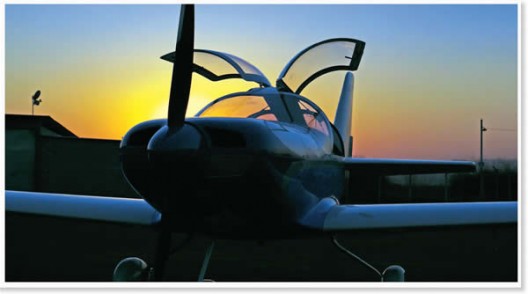 The combined team has been working with 100 FIAT electric Palio Weekend cars assembled from parts in Brazil and 32 Renault Twizy compact urban vehicles.  They are also working on a hybrid bus, which like the cars will get part of its energy from Itaipu hydro power.

Zaramella thinks the main challenge for the new stage of the ACS electric airplane project is to increase the aircraft’s range. Although ACS is not involved in battery development, “We believe that in 2018 we will have batteries capable of keeping flights aloft for four and five hours at a cruising speed of 250 km/h in a two-seater electric airplane,” he says.

The team can provide longer flight ranges by making the airplane lighter. The lighter the airplane, the less energy it requires to keep it aloft. The company is focusing on this issue, Zaramella says. The already structure is made of a carbon fiber-based composite, with 100 kilograms (220 pounds) comprising battery weight and 27 kilograms (59.4 pounds) the motor.  That leaves 523 kilograms (1,150.6 pounds) for the rest of the airplane, including landing gear, instruments and all other structural and non-structural elements.

Next, ACS/Itaipu will use their findings from test flights to develop and sportplane and a motorglider based on the Sora-e.  Readers can follow their progress on their Facebook page, seemingly their communications medium of choice.  It includes additional short videos.