With the sun soon to rise in the Pacific, Solar Impulse 2 continues scooting at over 60 mph toward Honolulu as the third night comes to an end.  Significantly, Andre’ Borschberg and the 747-size plane have made it past the Midway Islands, once a stop-over for Pan-Am Boeing 314 “China Clippers.”  Even with their 3,500-mile range, those luxurious planes needed a fueling stop mid-way between Hawaii and China or Guam.

Boeing 314 “China Clipper” had 3,500-mile range, total luxury for passengers – but still had to make stopovers for refueling

The islands were important enough as a way station in the vast Pacific that one of the largest and most decisive battles of World War II took place near them.   In a battle terrible destructive to both sides, U. S. forces sank four Japanese carriers, essentially casting the fate of the remaining battles. 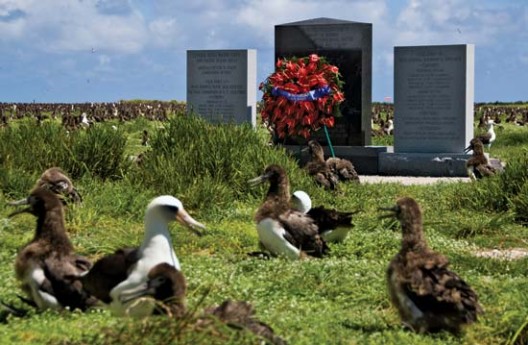 Midway National Memorial commemorates WWII battle. Albatross next there, but are endangered by worldwide plastic pollution in oceans

The still-important role of the islands as emergency landing sites was reinforced in 2014 with the safe arrival of a Boeing 777 following “an odor” and failure of radar and other electronic systems.

The idea of a “point of no return” has been crucial in flight planning with fossil-fuel powered airplanes.  The midway point of a trans-ocean flight is a psychological and physical reality, with options quickly fading as the aircraft passes that imaginary point in the sky.  With a craft like the Solar Impulse, even marginally better batteries would negate the whole idea of crossing an imaginary line where turning back was impossible.  Flight planning for this leg of the journey has to take into account the short nights and long days in the Northern Pacific.  Trying this journey in the darker days of fall or winter would leave the current system wanting.  Near-future improvements in batteries will allow flight of solar-powered aircraft through the longest nights. 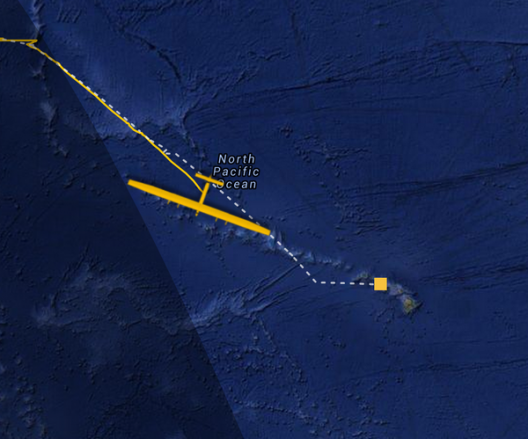 We continue to applaud the brave and resourceful pilot and the superb intelligence behind this voyage.  God speed!