Frédéric Laude reported the near-flight condition of his team’s CC01e on Sunday, February 3 on the team’s blog.  We’ve been following the progress of the airplane for several months. 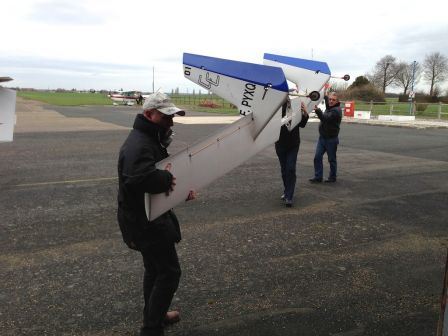 Carrying F-PYXQ’s wing and rudders to the assembly point

A very small canard, with a pilot tucked into a slim, minimal fuselage just ahead of its small Electravia motor, the plane was taken from its hangar and assembled this week despite the cold, wintry day.

Frédéric reports that the team chocked the wheels and started to test motor and battery power, reaching 250 Amps and 3,500 rpm at the propeller.  200 Amps gave 3,200 rpm, and 150 Amps produced 2,900 rpm, even with cold batteries.  He notes that this is all much simpler than trying to run the original not-so-quiet two-stroke engine. 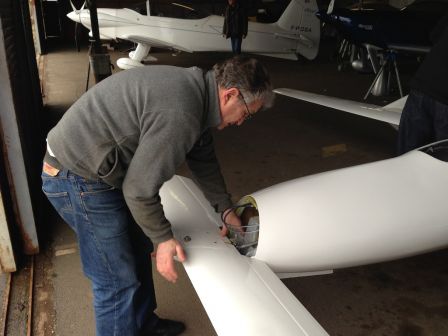 For the video, the motor’s top cover was left off, but will be replaced for flight testing, and a final spinner will cover the propeller hub after the first flight.  Unfortunately, the video is not yet on YouTube, but can be seen on the CCO1 blog.

Frédéric explains, “The engine ran 25 minutes today and the battery was still charged to 40% after all these tests. It is clear that if you push the knob, the electrons escape from the battery very quickly. Recharging the battery is quick enough and only takes 2 hours.” 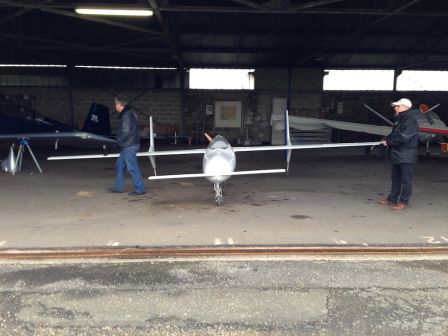 Guiding the petite canard from the hangar for taxi tests

At the end the motor/battery run-up and brake testing, F-PYXQ was put back in the hangar, causing Frédéric to comment, “We do not yet have an electric plane, just an electric car.”

Following a few more tests, including measurements of battery discharging and recharging rates and operating temperatures, the team will firm up their aircraft’s standing with OSAC (Civil Aviation Safety Organization), which carries out safety inspections for  the DGAC (Directorate General of Civil Aviation), which has already signed off on the canard’s general health.  Once they receive the final nod, the team will begin flight testing.

We look forward to what this little gem will be able to do.  It should mark a milestone in inexpensive flight – all on battery power.