Pipistrel had a good week at Oshkosh.  Shortly after its G4 placed ninth in the Dead Grass Awards, an indication of the number of spectators who tramped around the perimeter of the displayed aircraft,  the company could announce the first test flight of the four-seat electric motorglider.

“We are pleased to announce that after long and demanding work nearly of a nearly 30-member team of developers and constructors from Pipistrel’s R & D Institute the first 4-seat electric aircraft in the world took off this morning [August 12, 2011] at 7 AM local time.” 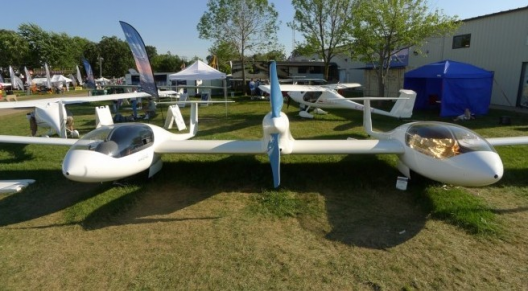 Pipistrel overcame several difficulties in achieving this milestone.  Developing the electric power system, the most powerful currently in an aircraft, and importing the 450 pounds of lithium-polymer batteries needed to energize it presented many issues.  Perhaps the utterly new and unique design and the possibility of that many batteries self-igniting caused insurance companies to be more than normally cautious, although one did finally step forward.

Because the FAA “requests” that an American perform initial test flights and rules for the Green Flight Challenge require an American pilot, Pipistrel turned to a highly qualified test and race pilot.

“After the AirVenture expo, when the huge airport complex emptied, the friendly airport crew allowed us to use of the airport hangar and runway for testing.  Thus the Pipistrel team with test pilot Dave Morss achieved the historic flight this morning. “

Designed specifically to compete in the $1.65 million Google/NASA/CAFE event, the G4 comprises two Electro Taurus G2 fuselages connected by a wide-chord, five-meter (16 feet) center section, bisected by a power pod in which the tractor-propeller, 145 kilowatt (200 horsepower) motor and the battery pack rest.  Total wingspan is about 21.36 meters (75 feet). 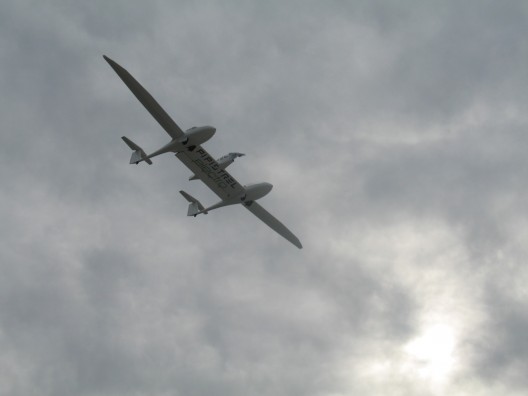 The twin landing gear (one per fuselage) can be retracted for improved performance and glide ratio, which Tine Tomazic, Pipistrel engineer and G4 development team leader says is “very high” – more than 30 at the cruise speed of 100 miles per hour.

Pipistrel credits its teams, which developed and produced all components of the aircraft.   Aerodynamic studies were performed by Professor Dr. Gregor Veble, Head of Research, with construction accomplished by Dr. Vid Plevnik in cooperation with engineer Rado Kikelj.   Composite technology parts and systems were created by Sašo Kolar and Franci Popit with their teams.  According to Pipistrel’s press release, “The most challenging part, namely the development of electronic systems and their regulation as well as the system for charging the batteries were developed by engineer Jure Tomažič with his team.”

Pipistrel is looking for a three-peat with this craft, joining its sister ships that won the 2007 CAFE/NASA Personal Air Vehicle (PAV) Challenge and the 2008 CAFE/NASA General Aviation Technology Challenge Centennial Challenge, in which the Pipistrel Virus SW claimed victory two years in a row.  Dr. Jack Langelaan of Pennsylvania State University and head of the race team, will oversee the 40-hour test program to prepare the G4 for the contest.

The Green Flight Challenge, sponsored by Google, will take place September 25 through October 2 in Santa Rosa, California, followed by an awards ceremony at NASA/Ames Research Center at Moffett Field on October 3.  Details can be found at the CAFE web site.