Under normal circumstances, this editor would never resort to scatological titles, but Mark Moore, the NASA aerospace engineer behind this fantastic flying creation calls his electric craft, “Puffin” because, according to Moore, the bird after which it is named, “Hides its poop, and we’re environmentally friendly because we essentially have no emissions.” Like the Puffin, this craft looks a bit chubby and incapable of flight on the ground, but folds its legs on liftoff, and becomes a streamlined bullet. 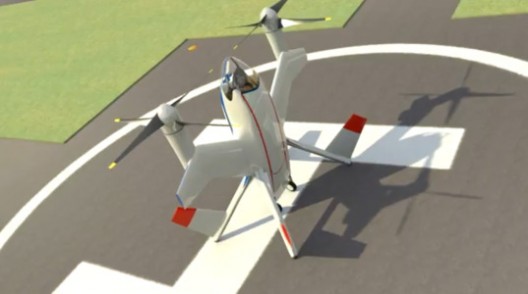 Its landing gear legs splayed out to hold Puffin upright

Moore, who spoke at last year’s Third Annual Electric Aircraft Symposium, and will return for this year’s CAFE Foundation gathering at NASA Ames Research Center in April, unveiled this concept at this year’s American Helicopter Society meeting in San Francisco. Moore and his colleagues, who include personnel at NASA, Massachusetts Institute of Technology, Georgia Institutute of Technology, the National Institute of Aerospace, and M-DOT Aerospace, plan on flying a third-scale model of the VTOL craft in March, and thus Moore may have news for the Fourth Annual Symposium.

Specifications are spectacular. With carbon fiber advanced construction, Puffin weighs in at 135 kg (297 pounds) and with a 45 kg (99 pound) battery pack, will have an empty weight of only 180 kg (396 pounds). Its 60 hp motors, driving twin 2.3 meter propellers (7.4 feet), will allow Puffin to cruise at 240 km per hour (about 150 miles per hour) or top out at 480 km per hour (300 miles per hour) – but only for short bursts, since batteries would drain quickly and range would suffer considerably. The large, slow-turning propellers will produce only about 50 dB of noise for ground observers as it flies over at less than 500 feet, about one-tenth the noise produced by current low-noise helicopters. 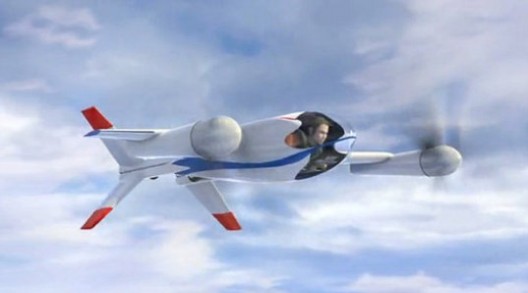 Its wing flaps would be positioned to help hold it down while the props came up to speed, and once launched, it would tilt over and the pilot would be flying in a prone position. The craft would tilt to full upright position to land, and its gear would splay out to allow a gentle descent for the pilot pod. With currently projected battery packs, Puffin could carry its pilot to nearly 30,000 feet in one long climb, or tilt over at a comfortable cruising altitude and sprint 80 kilometers (50 miles). Considering that a Chevy Volt is projected to cruise 40 miles on its batteries, Puffin is a much cooler way to commute. Future battery development would improve range, and Moore projects that planned cell development through 2017 would allow ranges of 240 to 320 kilometers (150 to 200 miles).

The flight path of the Puffin needs to be seen to be believed, and this excellent video will have us all breaking out our checkbooks and mortgaging the kids’ grad school ambitions.

According to Scientific American, Dr. Brien Seeley, President of the CAFE Foundation, noted that, “In my opinion, a mass-marketable version will need conventional seating, cup holders and a short runway for glide-in, view-ahead landings – but opening up people’s imagination is the first essential step.”