We’d all love an electric car (or an airplane) that goes more than 100 miles flashing a “Low Battery” indicator.  Researchers at the Toyota Research Institute of North America (TRINA) are working on a divergent approach to achieving greater range and smaller battery sizes by using magnesium as an active ingredient.

In a bit of serendipitous synergy, Toyota principal scientist and chemical engineer Rana Mahtadi heard fellow researchers discussing development of an electrolyte for a practical magnesium battery.  She was researching hydrogen storage materials and their application to fuel cell technology at the time, and realized the two lines of research intersected nicely.

Toyota explains that “Magnesium metal has long been theorized as a much safer and more energy-dense alternative to current lithium battery technology. Lithium metal, in its natural state, is unstable and can ignite when exposed to air. In order to make lithium metal safe for batteries, ions are taken from the lithium metal and embedded into graphite rods, which are then used in batteries. That lack of actual metal, however, limits the amount of power a battery can store.”

Magnesium, according to Toyota, is a very stable metal with the potential to store much more energy.  Scientists hadn’t found a magnesium-friendly electrolyte that would allow practical battery development up to now. 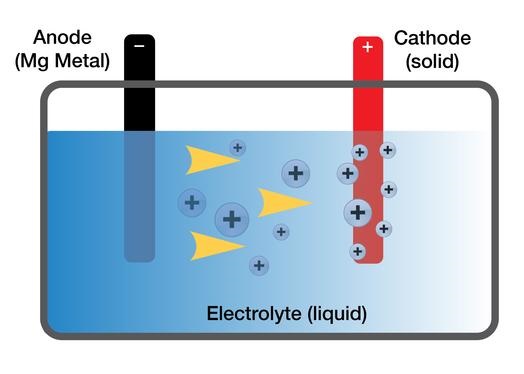 Toyota’s simplified schematic of the three three main components in their magnesium battery: an ANODE (-), a CATHODE (+) and between them, an ELECTROLYTE. Electrons move between the anode and the cathode through the external circuit, while ions are transported through the electrolyte to balance the charge. Different metal combinations require different electrolytes that must efficiently allow the movement of ions while not corroding the anode and cathode.

Batteries are made up of three main components: a ANODE (-), a CATHODE (+) and between them, a ELECTROLYTE. Electrons move between the anode and the cathode through the external circuit, while ions are transported through the electrolyte to balance the charge. Different metal combinations require different electrolytes that must efficiently allow the movement of ions while not corroding the anode and cathode.

Without telling us what the material is, Toyota’s press release hints at big things to come – just not right away.  Mohtadi said, “We were able to take a material that was only used in hydrogen storage and we made it practical and very competitive for magnesium battery chemistry. It was exciting.”

Energy Storage Group Manager Paul Fanson relates this to the team concept Toyota embraces.  “The results really speak to the strength in our group.  We try to put people from diverse backgrounds and diverse technologies together and allow them to collaborate. This is a great example of that working very successfully.”

Toyota shares its findings in the journal Angewandte Chemie International Edition (Vol. 54, Issue 27) under the title “An Efficient Halogen-Free Electrolyte for Use in Rechargeable Magnesium Batteries,” in the hopes that others will add to the push forward.  Oscar Tutusas, a fellow researcher, takes a cooperative view.  “We want to make this electrolyte a standard for magnesium batteries… and we want other researchers to develop it further so these batteries can see the light of day.”

Note that it might take 20 years for this initial discovery to see commercial reality – much like other “breakthrough” developments.