Ilan Kroo, according to his biography page, is a Professor of Aeronautics and Astronautics at Stanford University, an advanced cross-country hang glider pilot, and designer of the Swift flying wing hang glider, unmanned aerial vehicles, a flying Pterosaur replica, America’s Cup sailboats, and high-speed research aircraft.  Currently on a leave of absence from Stanford, he has started Zee Aero, “a bay area start-up company focusing on bringing new technologies to civil aircraft.”

Zee Aero, on its first of five sparse web pages, proclaims, “We’re creating an entirely new aircraft,” a heady claim considering the lack of supporting descriptions or illustrations.  But other sources have been made available, including Zee’s patent applications, which show a slim tricycle-gear fuselage surmounted by variously drawn structures holding eight upward-facing propellers and two propellers in the tail, apparently to push the whole assembly along. 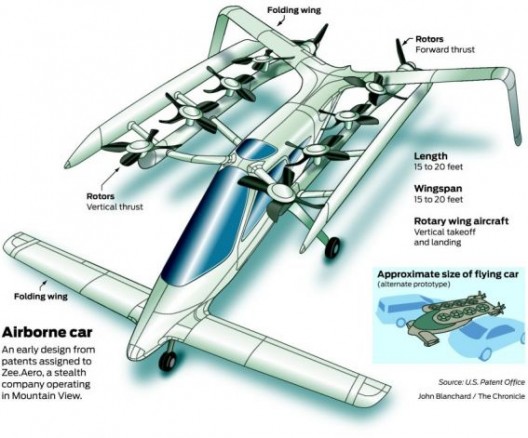 KGO television sent a news crew to Zee’s Mountain View headquarters, and broadcast nice views of the secure building in which the company’s workers design their future craft. No one gets inside without an access code.  KGO punted with “canned” interviews with Terrafugia personnel, and footage of the Transition flying over Oshkosh, Wisconsin (mis-identified as Indiana) at the 2013 AirVenture.

Zee’s second page, headlined, “RE-ENVISIONING FLIGHT,” explains a bit more: “In the heart of Silicon Valley, at the intersection of aerodynamics, autonomy, and electric propulsion — we’re changing personal aviation.”  Page three continues: “WORKING AND LEARNING: With simulations and prototypes, CAD and carbon fiber, we’re designing, building, and testing better ways to get from A to B.”

Page four lists 10 openings in the company, ranging from one for an aerodynamics engineer to one for a composites manufacturing technician.  We can surmise electricity will power the craft since Zee has two openings for mechanical engineers specializing in batteries.  Will the batteries be integrated into the structure? 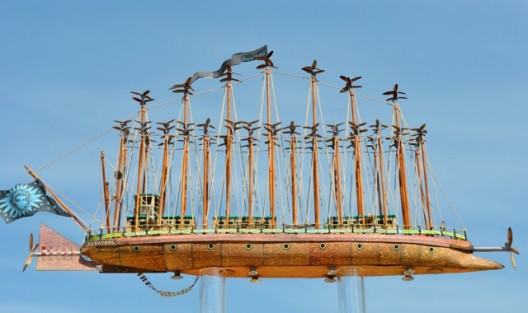 Model of Jules Verne’s Albatross from his book, Robur the Conqueror

While the Volocopter VC200 is an egg-shaped people carrier, Zee’s lifter has a slender, sailplane-like look to it.  Both vehicles use an array of lifting rotors, not unlike Jules Verne’s much larger machine in Robur the Conqueror.  Verne’s fictional creation foreshadowed elements of e-volo’s and Zee’s machines.  “Engines of suspension and propulsion. – Above the deck rose thirty-seven vertical axes, fifteen along each side, and seven, more elevated, in the centre. The Albatross might be called a clipper with thirty-seven masts. But these masts instead of sails bore each two horizontal screws, not very large in spread or diameter, but driven at prodigious speed. Each of these axes had its own movement independent of the rest, and each alternate one spun round in a different direction from the others, so as to avoid any tendency to gyration.”  Smaller and more streamlined, Zee’s offering will still follow the general aerodynamics Verne concocted. 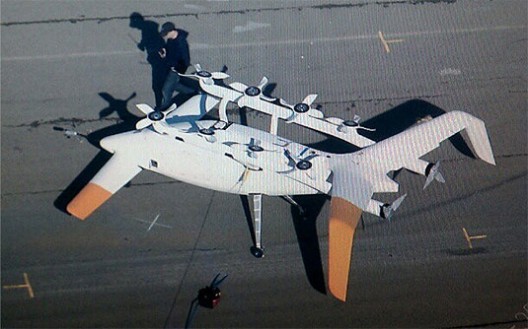 Drawings and reality do not all match, with enclosed rotors on some patent drawings and others looking like this test vehicle

A blogger for SF Gate, along with several other reporters speculate that Zee’s aeronautical offering may be a Google product, since Zee’s office is adjacent to Google’s in Mountain View.  So far, that question has been ambiguously answered, with several potential inferences to be drawn about such a relationship.  Sebastian Thrun works with Google, and it implied in some stories to have something to do with Zee, but the genius behind the Google car cannot be positively identified as having anything to do with a Google aircraft – yet. 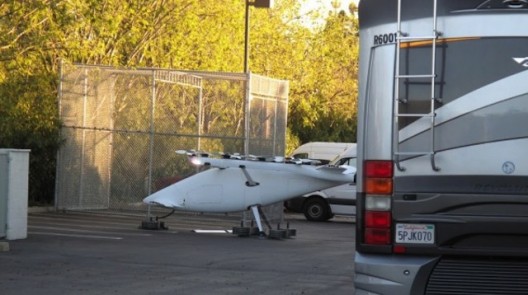 Based though on its founders history and achievements, we should expect the Zee aircraft to be at least as interesting as the teasingly revealed machine in a nearby parking lot, an image captured by a local reporter.