A Controversy for Starters

Skeptics abound concerning the current spate of vertical takeoff and landing (VTOL) machines.  The latest entry in the competition comes from the trio of Erik Lindbergh, Eric Bartsch, and Pat Anderson of Embry-Riddle Aeronautical University.  Their Verdego eight-rotor machine looks a bit like the Airbus A3 Vahana, but has pusher, rather than puller, propellers on the rear wing. 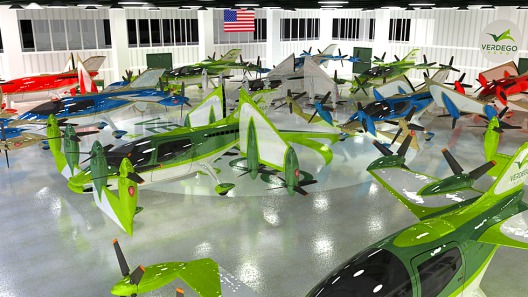 Verdego is compact, allowing a multitude in the hangar

On his Linked In page, Bartsch jumps into an ongoing fray with his article, “The Inevitability of Short-Range Urban Aviation – Why I’m Betting Against the “Flying Uber” Skeptics.” It takes aim at the opposing point of view in “Going Direct: On the Insanity of Flying Ubers,” by Plane & Pilot writer Robert Goyer.  To shorten the two arguments to their most primal levels, Eric Bartsch thinks sky taxis are coming and are inevitable.  Goyer thinks the idea is insane and not supported by even basic physics or available mechanical systems.  He doesn’t acknowledge an advantage to having a sky Uber drop down next to you and carrying you away.

Bartsch is a bit more optimistic on all fronts, although he starts by acknowledging Goyer’s outlook in acknowledging the decades’ long string of broken promises in the “flying car” realm.  But things have changed.  Bartsch and his two partners are not novices, having fielded a hybrid airplane for Embry Riddle in the 2011 Green Flight Challenge sponsored by Google.

They’ve also promoted electric aviation through their Powering Imagination symposium and the development of an electrically-powered DA-36 in the school’s Eagle Flight Research Center.  The EFRC folks, with Erik Lindbergh, ran up the eSpirit of St. Louis at AirVenture 2017 for FAA Administrator Michael Huerta and a crowd of admirers.

Erik advised your editor then of something bigger and better on the horizon, and just released a more full-blown rendition of the team’s ambitious next step.  As noted above, it’s similar to Vahana, but with its rear propellers (rotors) facing downward when the wing pivots to vertical mode.

Few details are available about the engine/generator, or the motors powering the rotors.  The team does see a number of possibilities for Verdego’s use, though: as a personal air taxi, an air ambulance, express cargo carrier, and for humanitarian relief efforts.

Eric Bartsch sees electric power as being the game changer that will make these dreams realities.  In his article, he argues that Goyer’s pessimism  is correct in its skepticism concerning a history of broken promises for these “flying cars.”  But, he explains, things are different now.  Interestingly, he points to Sao Paula, Brazil as, “An interesting glimpse into our future,” just as Airbus has for its VTOL prospects.

He points out that the city has, “500 private helicopters already in use, with a network of more than 400 helipads and around 700 daily flights. A helicopter can be thought of as version 1.0 of the “flying car.” It can go point-to-point without a need for airports, but its noise and cost aren’t ideal for the mass market. Sao Paulo continues to be an interesting exception that shows the potential for flying above surface congestion, but this model hasn’t scaled elsewhere in the world. Sao Paulo, Brazil is an interesting glimpse part way into our future.”

Electric propulsion reduces noise (Eric has flown the Yuneec Greenwings aircraft he attempted to manufacture and distribute), a factor that keeps new airports and heliports from even being considered.  Electric propulsion “Fundamentally changes what an aircraft can do and what it looks like.”  Designers can’t just pop in an electric motor in place of the ICE unit.

He explains that a huge amount of airspace is available and unused now.  Compare the number of things you can run into while driving with those at 1,000 feet, for instance.  Compare the number of cars, trucks and buses around you with the total number of aircraft you see in the sky at any time.  (He wisely counsels not doing this while you are driving, but while as a passenger.)

Second, Eric looks at customer habits, asking, “How many of us were using Uber. Lyft, Didi Chuxing (China), Ola (India),” or the many on-line apps now available for that matter?”  Technology is adding to the range of choices.  Rather than investing (?) in a $50,000 to $100,000 vehicle, people now invest in a $500 smartphone and wait for their ride to show up. 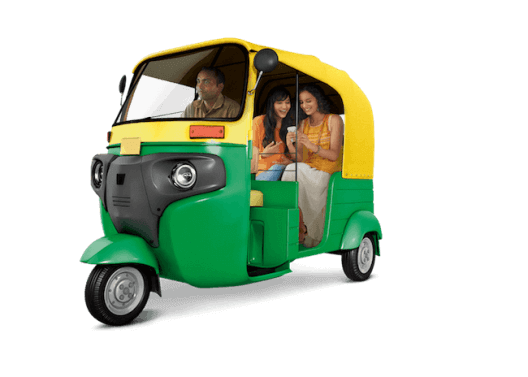 You can have a driver pick you up in one of these thorugh OLA in India, and still be stuck in traffic

Waiting may be the downside of that equation.  Eric notes that “Premium on-demand transportation is still a disappointment.”  Paying more gets you “A nicer smelling car and driver, but it gets stuck in the same traffic bottlenecks with the same randomness of urban traffic to contend with.”  A half-million-dollar Verdego rising above it all for a $120 fare may make it all more civilized and worth every cent.  Eric compares it to riding on a $70 million 737 for $99.

Or you could rise above it all (for an extra fee)

Third, geography makes a counter-intuitive capping argument for the new mobility.  We’re moving to cities, and the dense urban environment is a playground for VTOL short-hop machines.  Private aviation took flight in post-WWII with little airplanes ideally suited to grass fields and country living.  The $100 hamburger is still a reality, hopping from one rural airport to another on weekends, but the new paradigm might be the $150 Uber flight to a distant skyscraper for an art opening or business meeting.  The objects of each type of flight set time vs. money at odds.

Circumstances are changing, and conflicts between more traditional pilots like Goyer and the futurists like Bartsch will sort themselves out.  Your editor knows change may be inevitable, but he still likes cruising with the side window and door open in a J-3 Cub over the forests and fields.  Both possibilities can be electric.