Teslarati, the forum for Tesla fans, includes a fascinating concept for an electric/jet airliner, as proposed by Peter Egan, a web-site member from Artarmon, New South Wales, Australia.  His proposal could be applied to smaller jet airliners in anything up to the Boeing 737 or Airbus A320 class. 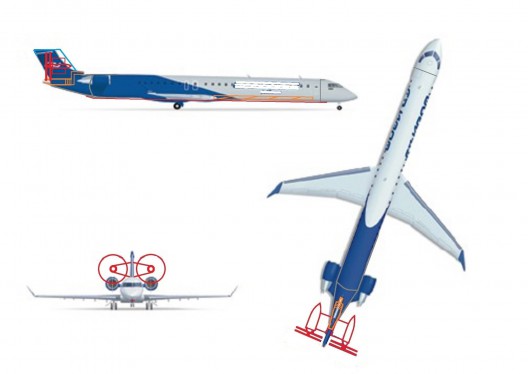 CRJ1000 modified for hybrid electric flight, 2,500 kilometer (1,550 mile) range with reduced fuel use.  Note horizontal tail is replaced with elevator/motor mount system.  Conventional jet engines would be removed in this version and are shown for size comparison

He uses a Bombardier CJR1000 100-passenger regional jet for his example, and shows a large motor pod-elevator replacement on each side of the fin, with counter-rotating propellers on either side of the rudder.  (Whether this arrangement would be aerodynamically or structurally sound remains open to investigation.)  His concept drawing includes the existing General Electric-CF34-8C5A1 turbofans for comparison, but they would be removed.

To support the aircraft, a Tesla tug would tow the airplane to the end of the runway before takeoff and a 1,000 kW charger would bring batteries up to full charge while the airplane is parked.  Wheel motors will taxi the aircraft and help it accelerate to takeoff speed.

Peter calculates a “25 percent improvement in fuel economy expected compared to 86 seat Bombardier Q400 turboprop.”  The same motor/APU concept could be applied to other aircraft in this size and weight range, according to Mr. Egan.  You can see more details on this interesting proposal here.

Certainly, with growing concern over environmental and health issues regarding fossil-fuel powered jet liners, improvements in fuel economy and a concomitant reduction in emissions will be welcome.  Peter Egan’s concept is a launch point for many possible iterations and variations.