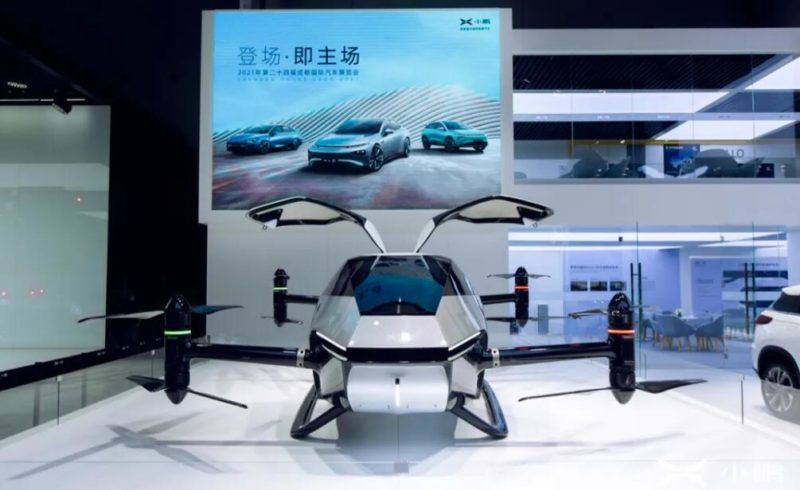 A new player in the electric aviation market, Xpeng has introduced a series of electric aircraft, and is currently test flying them.  A relative newcomer to the electric vehicle scene, Xpeng is making inroads with a sport utility vehicle (SUV), its P7 sedan, and its aerial projects.

“Xpeng or Xiaopeng Motors, also known as XMotors.ai, is a Chinese electric vehicle manufacturer. The company is headquartered in Guangzhou, with offices in Mountain View, California in the US and is publicly traded on the New York Stock Exchange,” as reported by Wikipedia.  Prices in China range from around $23,300 for the G3 to around $50,000 for the P7, claimed to have a range of up to 408 miles.  Both are slated to be competitive with comparable Tesla models.  The company doesn’t seem to be listing prices for their aerial EVs, though.

eVTOL News reports, “The aircraft has a maximum speed of 72 km/h (45 mph) and a range of 30 km (18.5 miles) or 30 minutes, whichever comes first. The original name of the aircraft was the Kiwigogo T-One (was also written as T-1 and A-1) but as of September 2020, the aircraft’s name has been shortened to Kiwigogo. (And since renamed the X1, apparently) The first flight for the aircraft was June 2018.”

The same source provides these specifications:

Eight times 80 kW equals 640 kW total (858 horsepower), which seems a little overwhelming for such a craft.  That may account for the gross weight, probably necessary to carry the batteries for a half-hour’s endurance.

A Two-seater with Greater Speed and Endurance

The fifth generation of “flying cars” from Xpeng Huitian, the Voyager X2 is “being tested in extreme environment,” including, “high altitudes over cities like Xining and Yushu, Northwest China’s Qinghai province.”

Empty weight ostensibly includes batteries, making for a somewhat confusing comparison with the single-seater.  With two on board, all-up weight is close to Light Sport Aircraft (LSA) restrictions and about 400 pounds less than the X1.  It also claims an extra five minutes endurance

Capable of two “driving” modes, manual and autopilot, the “autopilot function can operate an automatic flight according to a predetermined altitude, speed, and flight time along a planned route.

With offices in Silicon Valley, a move toward our shores seems likely.  We can hardly wait for the competition to begin and our questions to be answered.