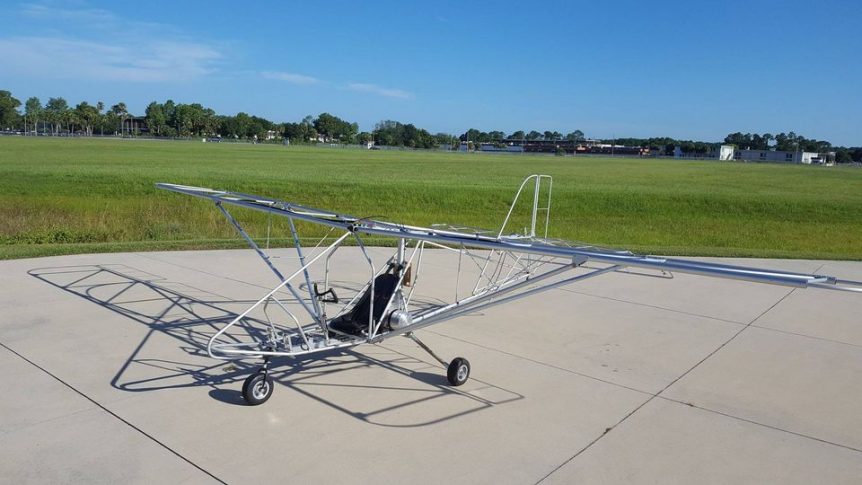 Shown and flown at this year’s Sun ‘n Fun and AirVenture, the Aerolite 103 is a well-tested, best-selling ultralight that in FAA Part 103 form is a true ultralight.  As an electric aircraft, it’s heavier and faster than accepted ultralight standards but no less a competent flyer registered in the Experimental category.

Designed in 1996, and with hundreds of the original two-stroke engine-powered versions flying, Aerolite’s originator Terry Raber sold the rights to Dennis Carley in 2012.  Manufacturing moved from Millersburg, Ohio to Delano, Florida.

The airplane retains its position as an inexpensive FAA Part 103-compliant ultralight – true to its name.  In the last few years, it has also become part of zero-emission flight.

Aerolite as an EV

One can only wonder where Gabriel DeVault finds the time.  Currently working in Hollister, California and Cirencester, England on ZeroAvia’s hydrogen-fueled aircraft, Gabriel was also powerplant developer for Zero Motorcycles.  His motors now power several homebuilt aircraft, including his personal eGull (recently sold) and his Sonex eXenos.  Since thousands of Zero bikes are on the road, a large number of “donor-cycles” are available.  Zero Motorcycles won’t talk to you if you mention the word, “airplane,” though.  So, search the used market. 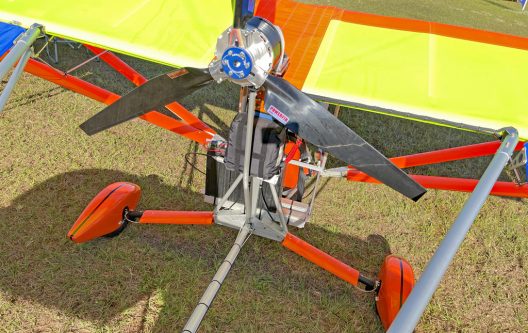 Gabriel designed the motor found on the Aerolite, too, creating a compact outrunner (the rotor spinning on the outside and firmly attached to the propeller).  It puts out about 22 kilowatts (30 horsepower), but likes to produce around 10 to 12 kW for a cruising speed in the mid-forties.  That makes the batteries keep the Aerolite airborne longer, too.

The 103 can carry two, three, or four 36-pound battery packs.  You need a minimum of two for flight, and that gives around 30 minutes of flight time.  Add a third for 45 minutes and a fourth for 60.  A tidy rack under the motor allows easy mounting of the packs.

Aerolite explains, “Our flight testing so far has shown that if you do a full power take off, climb to 700 feet or so, and reduce power to have a cruise speed of 40-45 MPH, you will be able to fly a maximum of approximately 60 minutes with 4 batteries.  If you want to increase your cruise speed to 60 MPH, total flight duration diminishes accordingly.  If you intend to do repetitive take offs and landings in the pattern, total available flight time will also lessen, as the consumption of battery power is disproportionately higher during full power climb (although you do not need full power to climb).”  That’s demonstrated in the Oshkosh video, with owner/pilot Greg in command.

Packs contain 240 Samsung 30Q cells, 20 each in series to obtain 72 Volts and “12 series strings in parallel to achieve the desired capacity.”  Managed by a custom battery management system (BMS) with over- and under-voltage and temperature limits, each pack is “potted,” or encapsulated in a weatherproof poly-urea compound.  They should withstand 500 charge-discharge cycles, giving one flight per day for over a year and a half.  (And seriously, the average light aircraft in the U. S. flies 80 hours per year.)

Gabriel’s 72-Volt motor weighs 30 pounds and “offers ~ 20 kW continuous and up to 25 kW peak power.”  Its low voltage enables it to produce maximum thrust at only 2,000 rpm.  Each battery weighs just under 36 pounds.  A setup with two battery packs and the motor adds 101 pounds to the Aerolite’s airframe.  With three batteries, the complete power system weighs 137 pounds and with four, 173 pounds.

Like the BMS, the motor controller provides over- and under-voltage protection and provides thermal limits for the motor and controller.  It can be connected to a display or an “app” to view EFIS (Electronic Flight Instrument System) information.

Incidentally, the electric power system can be installed on any Aerolite 103.

In Europe, all of Gabriel’s E planes, even the “heavy” ultralight, would be classified in the ultralight category.  Clean design is important.  Even though the Aerolite 103 is the lightest, it’s also the draggiest, and used more kW than the eGull, 12 kW to eight or nine for the eGull’s faster cruise.  That’s an important factor for endurance and range and what has held fixed-wing electric aircraft back so far.  The usual complaint is that we need better batteries – some of which are near and promising.  We could see a real expansion of light electric aircraft as that promise comes to fruition.