Val Miftakhov, founder and CEO of ZeroAvia, introduces tests of the company’s 600 kilowatt powertrain, mounted high atop their new mobile test bed.  In recent months, the company has achieved some solid recognition.

“In July, 2021, ZeroAvia has successfully tested high-power operation of its flight-intent ZA-600 (600kW) powertrain. The testing has been done on the brand new HyperTruck mobile ground testing platform ZeroAvia has developed based on a heavy-duty M977 HEMTT military truck. The HyperTruck platform is designed to be able to test not only the current 600 kilowatt system for 10-20 seat applications, but also the 2 Megawatt system currently in design phase, targeting 50-80 seat aircraft. The latest series of tests signifies a critical milestone before flight application of these powerplants later this year in the company’s 19-seat test demonstrator.”  Further down the line, plans for a 40-80 seat hydrogen-electric aircraft are in store.

Perhaps the high mounting of the powerplant comes from Head of Drivetrain development, Gabriel DeVault.  His work with NASA’s X-57 Maxwell project involved “flying” a wing and up to 18 motors at over 70 mph on Rogers Dry Lake near NASA’s Armstrong Flight Research Center at Edwards Air Force Base.

The high arrangement would seem to allow operation of the motors and folding propellers out of turbulence that might be induced closer to the ground. That the unit is sized to handle the two-megawatt system under development might require added ground clearance. 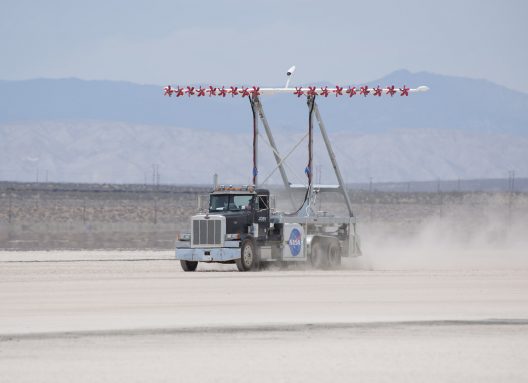 Gabe DeVault, the company’s Head of Testing and Applications, has another inducement: Just a reminder that ZeroAvia is hiring like mad! If you want to join us having all the fun here in Hollister, CA USA. Please contact me directly via linked-in. No recruiters please!”

He adds, on the ZeroAvia web site, “The Hollister testing is a significant milestone for our new HyperTruck testbed and ZA-600 that also confirms the operation of our next-generation control system and software. Our US team is excited to support the important work of our colleagues in the UK and ultimately scaling up our proven hydrogen fuel cell integration for larger commercial aircraft engines, which the HyperTruck supports.”

ZeroAvia has procured two Dornier 228 aircraft for next-phase testing. This will kick off further development of the program, which has been recognized by the World Economic Forum as a “Technology Pioneer.” 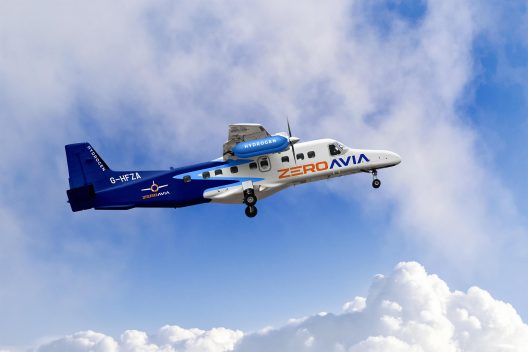 Timothy Reuter and David Hyde, writing for the Forum, explain, “…Short-haul flights of less than 600 miles account for more than 17% of total airline emissions that breakthrough technologies such as electric- and hydrogen-powered aircraft can play an important role in addressing – reducing not just C02, but other types of emissions that affect human health and the environment such as NOX and contrails.

“By some estimates, all flights of less than 2,500 miles, representing today more than 50% of CO2 emissions of aviation, could be electrified or powered by hydrogen. And there is no theoretical range limit for aircraft powered with a combination of hybrid electric systems and SAF.” 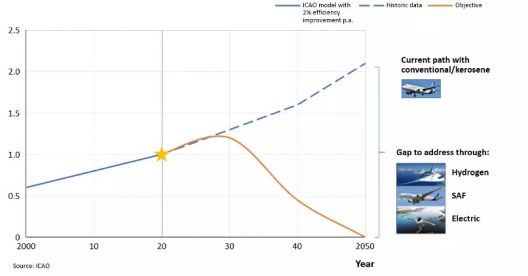 To top it off, “With their selection as Technology Pioneer, CEO and founder of ZeroAvia, Val Miftakhov will be invited to participate at World Economic Forum activities, events and discussions throughout the year. ZeroAvia will also contribute to Forum initiatives over the next two years, working with global leaders to help address key industry and societal issues.”

“Miftakhov also was recently selected to become a member of the Fuel Cell and Hydrogen Energy Association  (FCHEA) Board of Directors. The organization, “Strives to promote the environmental and economic benefits of fuel cell and hydrogen energy technologies.”

Things seem to be moving rapidly at ZeroAvia, and we can hardly wait to see what comes next in Hollister and the UK.