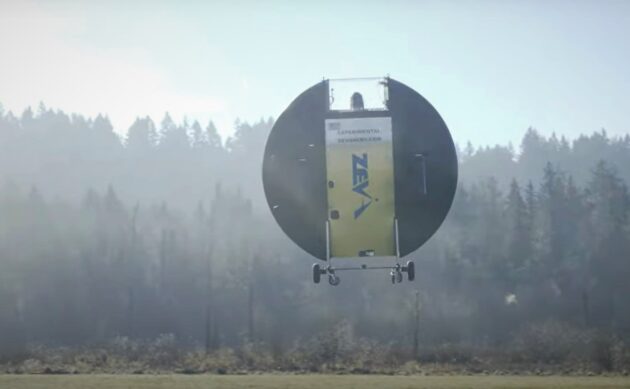 While waiting for Eviation Alice’s first test flight, we got a glimpse of another type of electric aviation in Pacific Northwest skies.  Zeva Aero’s Zero single “seat” flying saucer lifted off in someone’s sunny back yard for a series of hops.

The overlay of soft music keeps us from knowing how noisy this thing is, and it would be of interest to know if it passed the good neighbor test while levitating, and whether the eight motors and propellers hummed or screamed.  (NOTE: since the video of the flight test has been removed from YouTube, we’re substituting the company campaign video.

Founded in 2017 “to compete in the Boeing GoFly competition and then build a business on the back of that effort,” Zeva is the brain-child of Stephen Tibbits and Ben Gould.  Tibbits, a serial entrepreneur, has started at least four other companies and he and Gould now lead a team of 25.

Their mission statement seems a bit familiar in a market offering over 300 companies promoting much the same thing.  “OUR MISSION: To enable personal point to point air travel.  OUR VISION: To create the most compelling personal air vehicle company.”  The sentiments may echo many of those in this nascent market, but their approach is radically different. 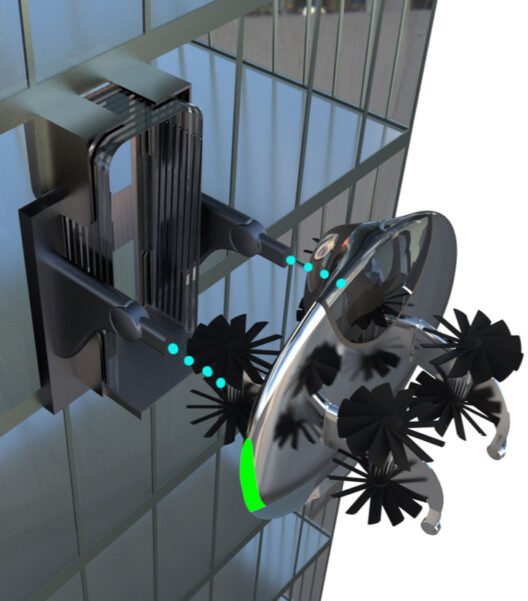 Zeva SkyDock would extend from building, protect operator on way to board Zero

The operator/pilot starts off in a vertical stance, pressing against the top of the Zero (and buckling in) before launching.  As noted in an earlier entry, the Zeva Zero can launch from a walkway extending from a high-rise apartment, so the operator will step out already at an altitude that might give some pause.  One wonders how the FAA will make allowances for flights between tall buildings.  Even Superman leapt over them.

In the current flight tests, radio control and a simulated pilot load take place in a grassy bit of suburbia.  Such freedom to take off and land in available spaces might make the Zero a hit with commuters who can find their parking space on a convenient roof top, but again, how will administrators see this freedom? 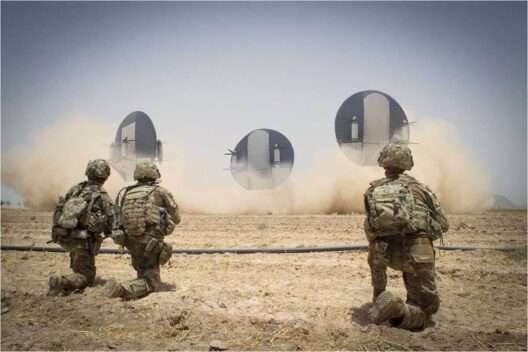 Military use in battle zones would overcome restrictions imposed by FAA

Suggesting that the little vehicles may be ideal first responder tools may soften bureaucratic resistance.  GeekWire reports, “‘Our long-range goal is the consumer, but there are a lot of pieces that have to be put into place before that happens,’ Tibbitts said. Getting the flying saucer certified by the Federal Aviation Administration will be a crucial step.  The first customers may well be first responders and emergency workers in areas where getting around is particularly challenging. ‘Where there is no infrastructure, those kinds of vehicles are perfect,’ Tibbitts said.”  The military is also one less restrictive, essential services type of area.

The company sees its “blended-wing body” configuration and its “SkyDock” landing platform as unique and distinguishing features.  It’s used these distinctions to promote its machine in crowd-funding programs.  Perhaps these same features will lure investors for a planned 2025 Initial Price Offering (IPO) as the firm heads toward full production and consumer acceptance.