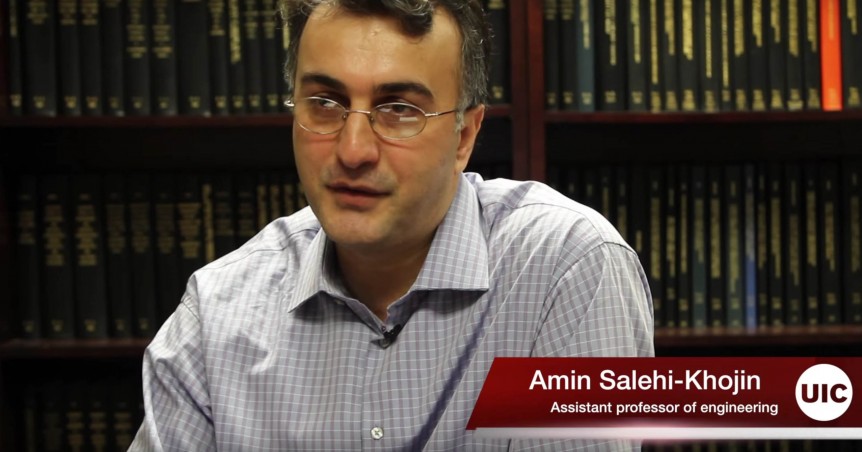 A significantly large and geographically diverse group of researchers has invested a large amount of time and intellectual capital investigating superoxides, an innovative way to keep lithium-air batteries refreshed and ready for more. Groups at Argonne National Laboratory, the University of Illinois at Chicago, Hanyang University in Seoul, South Korea; the University of Utah and the University of Kentucky all contributed to the ongoing project.

While still serving as U. S. Secretary of Energy, Steven Chu called on academia and industry to develop a battery five times as powerful as then available lithium cells, at one-fifth the cost of then current batteries. We may not have arrived at that ambitious goal yet, but Argonne and UIC see a possible breakthrough in making lithium-air batteries – theoretically the most energetic of lithium chemistries – into long-lasting, energy-dense energy storage units.

So far, lithium air batteries have a limiting weakness, the use of lithium peroxide, something that ends up being “an insoluble substance that clogs the battery’s electrode.” This “clogging” reduces electro-chemical reactions and finally stops them altogether, effectively killing the battery. Argonne battery scientists created an alternative battery “that produces only lithium’s superoxide, not peroxide, as the battery discharges. Unlike troublesome lithium peroxide, lithium superoxide easily breaks down again into lithium and oxygen, thus offering the possibility of a battery with high efficiency and good cycle life.”  Note that this is a lithium-oxygen, rather than lithium-air battery, with no need to take in outside air to maintain electrochemical reactions.

One obstacle was proving the claim by showing the superoxide reaction took place, and that’s where UIC scientists came in. Realizing that any measurements outside the actual cells were not accurate enough to see the reactions, Amin Salehi- Khojin, an assistant professor, and postdoctoral research associate Mohammad Asadi “devised a state-of-the-art mass spectroscopy apparatus to measure the electrochemical reaction products in situ during charging or discharge of the battery.” Operating in an ultra-high vacuum, the system is “very sensitive to the tiniest change in oxygen concentration,” according to Asadi.

Their spectroscope was precise enough to show one electron per oxygen atom produced in the reaction, an indicator that the battery was producing superoxide rather than peroxide. They also showed no other lithium compounds being generated as side-products.

Salehi-Khojin sees promise in the results. “This is going to be a valuable system for continuing the study of this battery and other types of metal-air batteries. Not only can we analyze the products of the electrochemical reaction, we can elucidate the reaction pathway. If we know the reaction pathway, we’ll know how to design the next generation of that battery for energy efficiency and cost effectiveness.”

The work was funded by the DOE’s Office of Energy Efficiency and Renewable Energy and Office of Science and the University of Illinois at Chicago Chancellor’s Proof of Concept Fund. 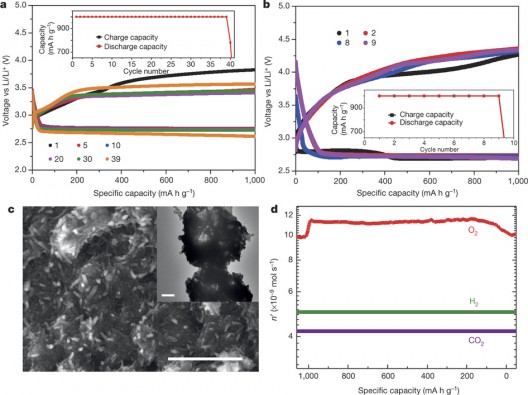 Because the lithium superoxide does not cause reduction in performance for the electrodes in the battery, the battery could be a closed system, recycling the use of LiO2 alone, and not requiring the intake of additional oxygen. “Our results demonstrate that the LiO2 formed in the Li–O2 battery is stable enough for the battery to be repeatedly charged and discharged with a very low charge potential (about 3.2 volts). We anticipate that this discovery will lead to methods of synthesizing and stabilizing LiO2, which could open the way to high-energy-density batteries based on LiO2 as well as to other possible uses of this compound, such as oxygen storage.”

The closed system could lead to a “new type of battery” that was a true 5x energy storage device, with the use of a “suitable graphene-based cathode.”
Larry Curtiss, a group leader at Argonne says, “This discovery really opens a pathway for the potential development of a new kind of battery. Although a lot more research is needed, the cycle life of the battery is what we were looking for.” The research teams may well have found it.