Peter Sripol is part of FliteTest, a group that sells electric model aircraft and components and produces some wild and wooly YouTube videos of their exploits.  The group’s products are mostly budget items, with simple aircraft quickly constructed the norm.  One example, the Simple Solar radio-controlled plane, can be built for under $60, and flies on two coreless motors.  Flite Test has quick build kits and FPV (First Person View) radio systems that allow a pilot to view, through an on-board camera, what a (really tiny) person on board the model would see.  This level of miniaturization and commodity-level pricing allows FliteTest to provide STEM (Science, Technology, Engineering and Math) kits to schools at the grade and high-school levels. 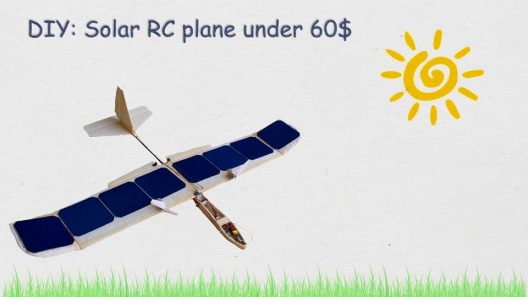 A $60 solar airplane from FliteTest

One of its newest members, Peter has jumped on FliteTest’s seeming willingness to try anything at least once.  Putting together extremely large models from foam and tape, it probably was only natural that he would make a modest jump into creating a real airplane.  Like the model products, his design is boxy and a bit steampunk.  Home insulation foam, large chunks of perforated thin plywood, and a pair of large model airplane motors form the basis for the low-budget flying machine. 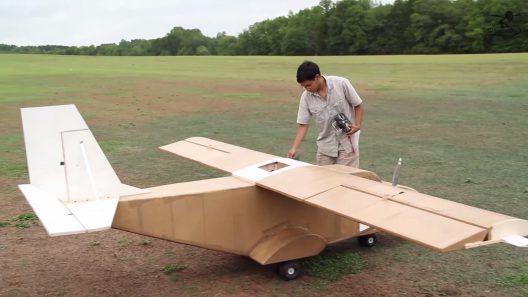 Peter made a series of YouTube videos showing the creative process involved, building approaches and finally the long-awaited flight test (FliteTest?).  Peter’s frenetic pace and MTV-style editing of his project might be almost wearying to the casual viewer.  But he (and his viewers) has breaks in which helpful – and sometimes concerned – viewers provide Tweets of encouragement and caution.  Peter takes the critiques to heart and incorporates the most helpful suggestions into his final product.

Peter’s videos include a pup who literally grows on the viewer, and like his master’s creation, achieves a great screen presence.  (The older black and white dog has to play a supporting role in the drama.) These seven short pieces cover a lot of ground, and show the many little details that confront a person crafting an airplane from “scratch.”  Starting on August 12 and finishing with test flights on October 31, the project is truly a “quick-build” enterprise, with trips to Lowe’s and Home Depot instead of Aircraft Spruce for supplies.

Part 1 introduces the protagonist and a model of his dream ship.  Unfortunately, a final flight causes Peter to lose control and crash the airplane.  In a moment we hope is not prescient, the model pilot’s head is ejected from the cockpit.

Part 2 depicts the rapid pace of laying out, cutting, and assembling the fuselage.  One gets the impression that years of building everything from models powered by spinning Kentucky Fried Chicken tubs (Magnus effect) to models literally made of food (most crashing into edible chunks) has given Peter the impetus to try just about anything at least once.

Part 3 gets into details of the cockpit and expands on the theme of a boy and his dog.  It includes techniques not covered in most handbooks on aircraft construction.  Combining 3D printing and prehistoric fabrication approaches, this section might challenge the builder who’s put together a kitplane following the plans to the letter.

Part 4 gets us through fiberglassing the fuselage and beginning wing construction.

Part 5 shows wing construction and some of the shortcuts Peter uses, including drilling through seven pieces of metal at once.  He also uses stacked boxes of noodles, rather than sand bags to stress test his wings.

Part 6 gets us to the installation of Giant Motors – a pair of Turnigy Rotomax 150’s.  They purportedly replace 150 cc fueled engines, glow-plug fired units that burn a mixture of methanol, castor or synthetic oil and nitromethane.  One can readily see that electric motors will make fewer immediate fumes.  WW I pilots, incidentally, used to have severe bouts of gastric distress from breathing castor oil fumes cast off by their rotary engines.

Part 7 ends with some triumphant test flights.  Peter dresses in the style of Howard Hughes with a leather jacket and thin necktie, appropriately Aviator-like for his moment of truth.  Tracking shots made from drones hovering overhead would make Martin Scorsese proud.

Peter shows that one can build and fly an electric airplane on almost steampunk technology, with a little help from 3D printers and CNC cutters.  His willingness to accept advice from a large number of followers is to his credit, and we hope his GoFundMe requests for ballistic parachute money will help him clear the field’s perimeter and attain greater than ground effects heights.