Human-powered flight is about as green as it gets, although the pilot/powerplant does emit CO2 and some methane during the exercise.  A human pilot can put out only about 0.25 to 0.5 horsepower for reasonable periods, with the record holders like Brian Allen flying The 70-lb Gossamer Albatross in its 26-mile cross-channel flight in 2 hours, 49 minutes,.and Olympic cyclist Kanellos Kanellopoulos of Greece flying 71.5 miles between Crete and Santorini in 3 hours, 54 minutes on April 23, 1988.  The flight holds the official FAI world records for total distance, straight-line distance, and duration for human-powered aircraft. 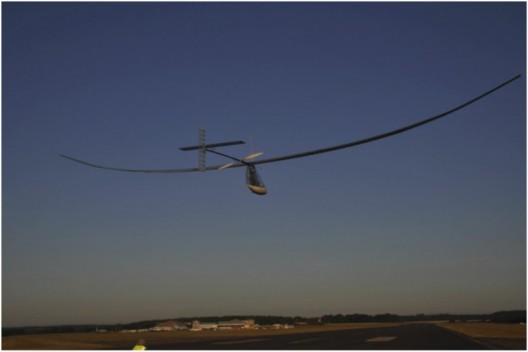 Airglow glowing in the early twilight at 2015 BHPFC Rally

Building even a simple airplane is a relatively complex task: dealing with the ultra-lightweight materials used in creating a featherweight machine that will survive being assembled, disassembled and flown for a week – often be several different pilots – is a definite challenge.

Past years have focused on getting airborne and seeing if a pilot can pedal and control the airplane for as long a distance as possible.  The BHPFC introduced new tasks this year, including taking off from grass, rather than a tarmac runway.  An added challenge, taking from grass and managing a 220-yard flight proved doable for three aircraft.  This is significant, since the extra power required to take off from grass can be a challenge even for a low-powered airplane. 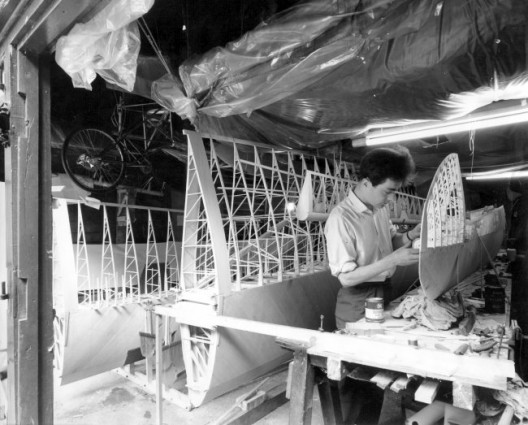 According to Man-Powered Flight (the title reflecting its first being published in the pre-PC era), by Keith Sherwin, the rolling resistance of short grass is 2.5 times that of a typical tarmac runway.  One advantage the HPA has is that its landing gear is also powered, helping with initial acceleration and attaining take-off speed.  Chris Roper reports, “It was significant that three aircraft all managed this.”  Chris, more than incidentally, is the designer of Jupiter, among the most successful of all pre-MacCready HPAs, having traveled 1171 yards in 1072 when piloted by Flight Lieutenant Potter. 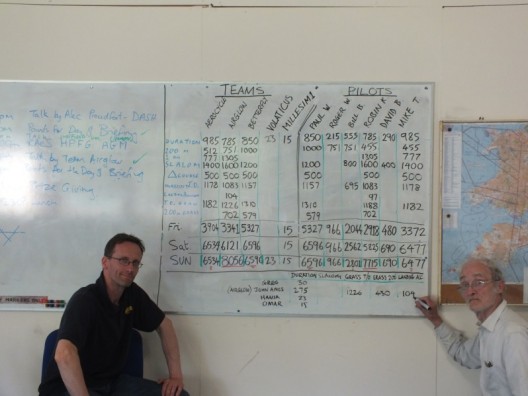 The whiteboard shows the week’s standings. There are no big prizes, but the fun and honor are worth everything

Chris explains the scores for the event.   “Note that the Scores, both for each pilot and for each team are the best-for-each-task during the week that each achieved. To win, you’ve got to be an all-rounder and score well for each task.”  Your editor found the rules fairly straightforward, but the scoring seems somewhat more difficult than cricket.

Voltaire came to an untimely end early in the week.  Luckily, there were no injuries other than to pride.

Aerocycle 3 had the winning ways this year, being flown by Bill Brooks, here, and by Mike Truelove, in alternate flights.  The plane is a design by John Edgley, of Edgley Optica fame.

Here, Aerocycle 3 is flown by Mike Truelove.  This craft and Betterfly were the endurance champions for the week.  Airglow, flown by Robin Kraike, had the top score with 7,715 points.

Aside from the video by Bordeaux University, all moving images are by Fred To, who flew the first man-carrying solar-powered airplane in 1978.  Which brings us to another consideration.   These may not be the fastest or most practical aircraft in the world, but they do show what we can do with simple, light structures.  Your editor would love to see an expansion of this sport in which small, model aircraft or pedelec motors would augment the human powerplant, making a human/electric hybrid that might provide a relatively low-cost sporting craft with unique potential.  The electric motor, though not for purists, would enable those of us who are not champion cyclists to at least think realistically about low-powered flight and to explore a realm of flight where we could share the sky with real birds.