EADS thinks electric and hybrid propulsion could become an alternative to fossil fuels within that timeline, with several projects highlighting, “the willingness of EADS to invest in technologies that today, tomorrow, will further reduce emissions of carbon dioxide from aviation.”

E-FAN
Working with Aero Composites Saintonge (ACS), the IW Research and Technology Group has developed and built the trainer all-electric “E-Fan” dedicated to general aviation.  Created in only eight months, this jet-like machine makes use of sailplane design and ultralight-type composite construction to house its two electric motors and two 65-kilogram battery packs in its wings.  Motors appear (in the video) to be similar to the Rotex units fitted to the Cri-Cri EADS present at the 2011 Paris Air Show.

Jean Botti, Chief Technology and Innovation Officer (CTO) of EADS explains,  “The introduction of the electric aircraft E-Fan is a new strategic step in the EADS aerospace research. We are committed to exploring technologies that optimize the energy efficiency of our civil and military products.”

With its 6.7 meter (22 feet) long fuselage and 9.5 meter (31-feet, 2-inches) wingspan, E-FAN, according to EADS, “Is the first electric aircraft with ducted propellers to reduce noise and increase safety.”  The E-FAN’s landing gear includes an electric drive that can taxi the airplane decoupled from the flight motors and even assist with takeoff, bringing the airplane up to 60 kilometers per hour (37.2 mph). An embedded optimized power management (e-FADEC) system provides automatic engine control and simplifies operation. “We believe that the E-FAN is an ideal platform which, once fully mature, will be certified and marketed as [an] ab initio flight school [trainer],” said Botti.

Two power systems – one 250 Volt and the other 24 Volt – power the flight motors and (in your editor’s guesstimate) the electric taxiing system.

Alongside the development of the E-FAN, EADS is exploring hybrid systems, an IW Technology Team working with Siemens and others to refine the Diamond Aircraft DA36 “E-Star” airplane introduced at the 2011 Paris Air Show. 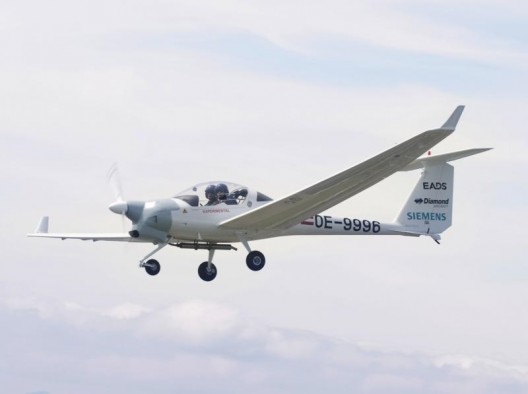 The E-Star now has a lighter, more compact motor from Siemens, and total aircraft weight has been reduced 100 kilograms (220 pounds).  A small Austro Engine Wankel rotary engine linked to a generator provides power to the battery packs in the wings.  Compared to the E-FAN, it is a decidedly conventional airplane, and one which could provide good touring capabilities if the fuel economy possible with hybrid power can be realized.

Distributed Power
Another EADS IW has been working with Rolls-Royce in the DEAP (Distributed Electrical Aerospace Propulsion) project, funded by the UK Technology Strategy Board. This project developed the architecture of a distributed propulsion system meant to improve fuel efficiency and reduce emissions and noise.  The architecture uses six power turbochargers connected in three clusters within a common intake conduit installed on the upper wing. A gas generator produces electric energy both for the motors and the reloading of the energy storage system.

“The idea of distributed propulsion offers the opportunity to better optimize individual components such as the gas generator, which produces only electrical energy, and turbochargers power, which deliver thrust. This architecture optimizes the overall integration of the propulsion system,” said Sebastien Remy, head of EADS Innovation Works, who hopes the, “Optimized integration of such a concept will reduce the total weight and drag of the aircraft.” 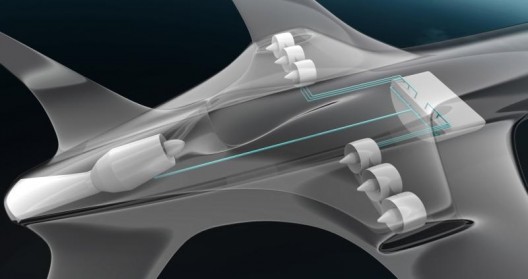 E-Thrust would have a sophisticated superconducting power system at its core; a single large advanced gas turbine engine acting as a generator feeding a “next generation energy storage system” and six electrically-powered fans producing thrust.  Flight profile management would use full thrust from the distributed electric fans for takeoff, draining the batteries somewhat even with the gas turbine recharging them.  At cruise, batteries would accumulate energy and during descent/glides drain slightly.  They would be recharged slowly during the descent/windmilling phase, with the airplane landing with fully energized batteries ready for the next flight.

Big or small, these EADS projects show an enthusiastic embrace of new technology, unfettered by conventional thought or constraints.  Such innovations will certainly help achieve the goals of the Flightpath 2050 Initiative.  Besides, your editor would love to train in an E-FAN as soon as possible.