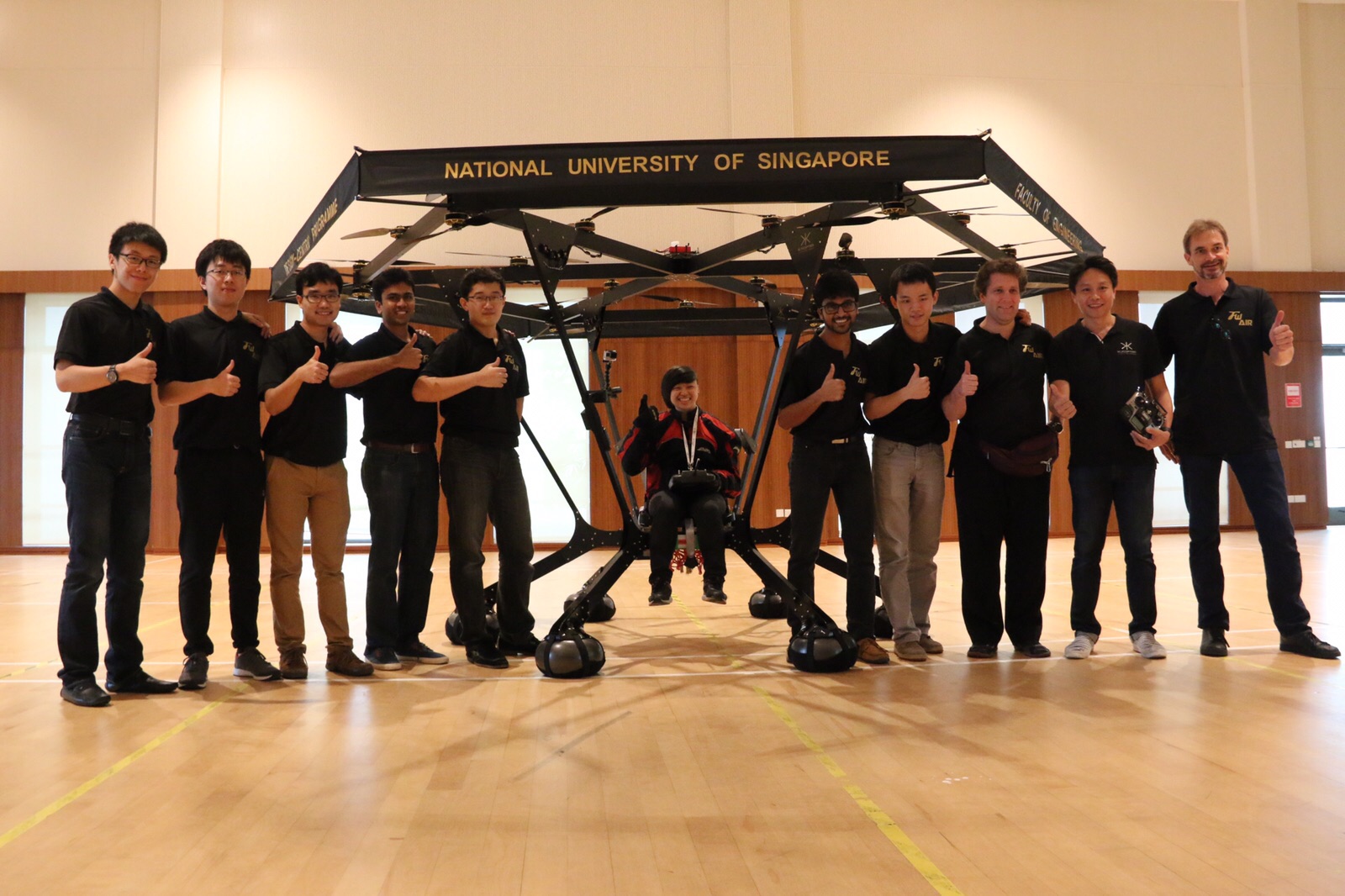 Having worked on a three-week project in Singapore 10 years ago, your editor became accustomed to the daily temperatures approaching 100 degrees Fahrenheit, and evenings at a temperate 80 degrees (which some locals described as a “cold snap”).  It makes one wonder where the name “Snowstorm” came from when students at the National University of Singapore worked two semesters to bring their mult-rotor recreational flying vehicle to fruition.  An eight-person student team working as “FrogWorks” started with a 1/6th-scale model, then scaled that up to something that could carry and be controlled by a single pilot.

FrogWorks is a collaborative effort between NUS Faculty of Engineering’s Design-Centric Program (DCP) and the University Scholars Program (USP).  According to NUS, “FrogWorks engages students in the study, design and construction of clean leisure craft, a rapidly growing segment of green technology. Previous FrogWorks projects include the conversion of a sport motorcycle and a yacht from petrol to electric propulsion.”

24 (six more than the e-Volo, but individually and collectively less powerful) 2.2 kilowatt motors drive a 76 centimeter (30-inch) propeller each.  Motors are powered by three independent lithium batteries able to keep the machine in flight for about five minutes.

The hexagonal anodized aluminum frame sits on six inflatable balls, small versions of the large exercise ball on which the original e-Volo machine landed.  Carbon fiber plates and Kevlar ropes help hold the structure together, and a five-point harness helps hold the pilot in place.

NSUS explains, “Rather than a mode of transportation, the team envisions this more as an electric aircraft for personal recreational use in a large indoor space, to satisfy one’s desire to fly freely.”  With drone pilots flying their machines through abandoned buildings and around intricate routes through forests, this might represent a new venue for flight.  One can envision indoor competitions of maneuverability and piloting skills, with welterweight flyers promoting an innovative extreme sport. 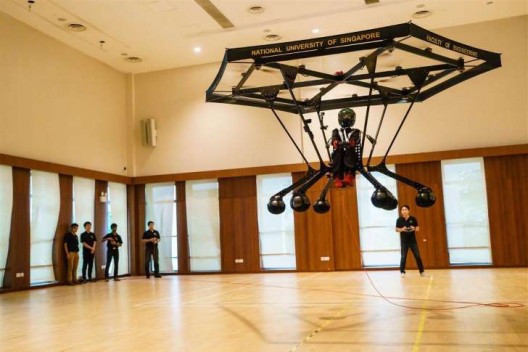 FrogWorks Snowstorm in flight, controlled remotely by student in corner of room.  Parts of landing gear were 3D printed, and maybe the pilot, too in this case

As with Aurora Flight Science’s “Pilot Optional” approach, the pilot, in this case, can turn over pitch, roll and yaw commands to Snowstorm, which can also hold altitude, position, and even loiter in a hover until commanded to snap out of it.  As with the Volocopter, a simple command will cause the vehicle to self-land.  Students designed the electrical control and stabilization, pilot safety and energy management and supply systems.  Like the Volocopter, the machine can be readily dismantled for “ease of transport.”

Dr. Joerg Weigl, one of two supervisors on the project, “NUS’ Snowstorm shows that a personal flying machine is a very real possibility, primarily as a means to fulfil our dreams of flying within a recreational setting.”

Fellow Supervisor and Associate Professor Martin Henz of the University Scholars Program and the School of Computing at NUS adds, “Recent advances in motors and battery technology has made it possible for us to literally take to the skies.  The NUS team will continue to fine-tune Snowstorm, working on mechanical safety measures, propeller and motor configurations, and control software and hardware to achieve the high levels of safety, simplicity and performance required for recreational use by the general public.” 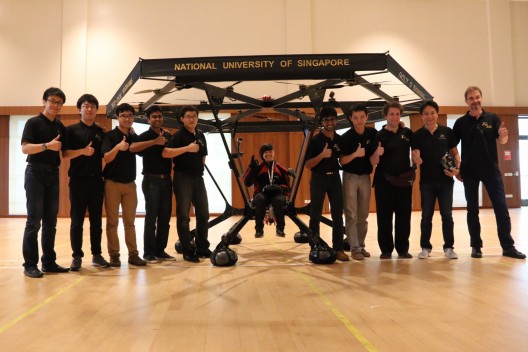 FrogWorks team, including real pilot, approving their efforts before going to write that tedious thesis

The team intends to continue development of Snowstorm with the aim of eventually bringing the project to commercialization.  As an aside, think of two Snowstorms facing one another in an aerial version of dodgeball or ping pong.  The possibilities are endless for true recreational flying.

This blog has highlighted others working in similar efforts, including an enthusiast in England and some dedicated developers in Hungary.  We wish them all the best of luck.