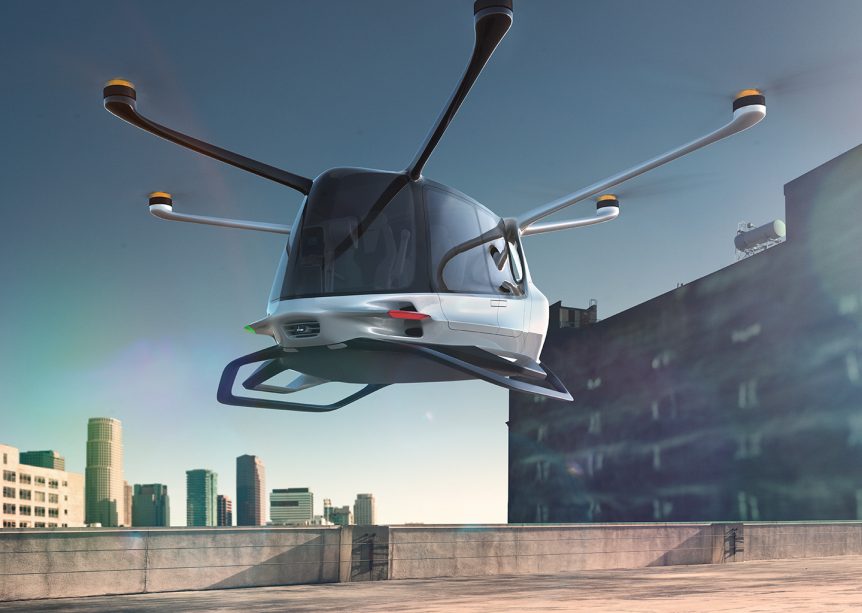 Alaka’I is Hawaiian for “the value of leadership” according to an island management consulting firm.  The word and the company have found a home in Boston, Massachusetts, where they look over the Alaka’i Skai, a hydrogen-powered sky taxi that will offer “point-to-any-point transportation that [is] safe, simple, zero-emissions, affordable and comfortable.”

Alala’i, founded by Brian Morrison, adds a hydrogen fuel cell hybrid-electric craft to the eVTOL market with a design by BMW-owned Designworks.    From above, it looks a bit like a water-skipper, probably an apt look considering its fuel.  Alaka’i emphasizes three points in its sales literature: simplicity, safety and the cleanness of its fuel and operation.

With several patents supporting the aircraft the machine supports its creators’ backgrounds, including 20 years with NASA.   Alaka’I claims the fuel cells are 95-percent reusable, the remaining five percent are 99-percent recyclable, with longer duration and range than its current competitors.  Its “simple” fuel system with three separate fuel cells enables its ability to carry up to 1,000 pounds in passengers or cargo.   Hydrogen has the highest specific energy of any practical fuel.  It can be refueled in 10 minutes, a significant benefit for repeated flights and speedy turnarounds.  Alaka’i Technologies Board Member Dr. Bruce Holmes points out, “Hydrogen has a few hundred times the energy density of the best of lithium ion battery technology.

Alaka’i has done the numbers on indirect costs and sources or pollution, including gasoline or diesel truck transporting the otherwise clean fuel, and is devising methods to eliminate or reduce these indirect burdens.

Six 100-horsepower outrunner electric motors give built-in redundancy, and can power its 1,000-pound payload over four hours or 400 hundred miles at 118 mph.  Triple redundancy in its fuel system and advance control systems will help enable safer operation.  Skai promotes its development team for its “next-generation Fly-By-Light controls and FAA certified avionics. All of these components are certified and proven. In fact, some of these trusted technologies were originally developed by Skai team members for prominent aerospace and defense clients.”

Unveiled in a non-flying version on May 29 at Newbury Park, California, the Alaka’i Skai caused NBC Los Angeles to say it “resembles an oversized drone crossed with a luxury SUV.”  The heavily-glazed cabin provides an excellent view, and designers even swept the motor arms to avoid blind spots above the passengers.

Many of our current technologies like fuel cells and solar cells have 19th-century origins and we’re just now figuring out how to put them to use.  Morrison points out, “We’re demonstrating what we began over 20 years ago together at NASA: truly point-to-any-point, safe, affordable distributed on-demand air mobility.”

Alaka’i says it’s planning its first test flight sometime in 2019 near its headquarters in Massachusetts.