We’ve seen several videos like this, a setup resembling a stomach distress remedy fizzing away and giving off bubbles of hydrogen and oxygen.  Dr. Daniel Nocera first created the idea of an artificial leaf, and several others have followed his lead and refined the process, which mimics nature’s leaves in converting sunlight to energy.

The U. S. Department of energy’s (DOE’s) Energy Innovation Hub, established at Caltech (California Institute of Technology) and its partnering institutions, has a main goal of creating “a cost-effective method of producing fuels using only sunlight, water, and carbon dioxide.”  Artificial photosynthesis has been tried in several variants, but researchers at Caltech and its Joint Center for Artificial Photosynthesis (JCAP) now claim to have developed “the first complete, efficient, safe, integrated solar-driven system for splitting water to create hydrogen fuels.”

Nate Lewis, the George L. Argyros Professor, professor of chemistry, and the JCAP scientific director, takes pride in his group’s accomplishment.  “This result was a stretch project milestone for the entire five years of JCAP as a whole, and not only have we achieved this goal, we also achieved it on time and on budget.”

Components for the water splitter seem simple enough, and are common among similar projects.  A photoanode uses sunlight to oxidize water molecules, generating photons and electrons as well as oxygen gas. A plastic membrane keeps the oxygen and hydrogen gases separate, thus preventing an explosion that might occur if the two gases mixed.  The membrane “lets the hydrogen fuel be separately collected under pressure and safely pushed into a pipeline.”

Silicon and gallium arsenide, used in solar panels because of their efficient absorption of light, oxidize (rust) in water, but putting a 62.5-nanometer-thick layer of titanium dioxide (TiO2) on Si and GaaS electrodes enables them to absorb light and remain stable.  Adding a two-nanometer layer of nickel to the TiO2 on the photoanode provided a low-cost, highly-active catalyst.  This treatment enabled the water splitter to operate 40 hours without operator intervention and maintain 10-percent light conversion efficiency.

Lewis explains the record-breaking nature of the new systems.  “This new system shatters all of the combined safety, performance, and stability records for artificial leaf technology by factors of 5 to 10 or more.”

“Our work shows that it is indeed possible to produce fuels from sunlight safely and efficiently in an integrated system with inexpensive components.  Of course, we still have work to do to extend the lifetime of the system and to develop methods for cost-effectively manufacturing full systems, both of which are in progress.” 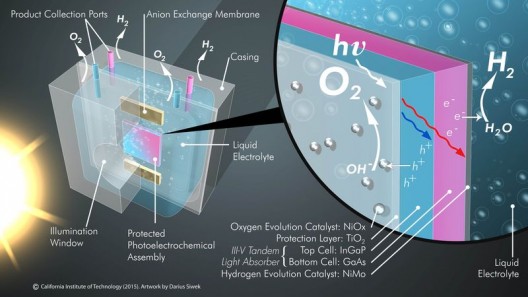 One of the co-authors of the paper on the findings, Harry Atwater, director of JCAP and Howard Hughes Professor of Applied Physics and Materials Science, adds an administrative note.  “This accomplishment drew on the knowledge, insights and capabilities of JCAP, which illustrates what can be achieved in a Hub-scale effort by an integrated team.  The device reported here grew out of a multi-year, large-scale effort to define the design and materials components needed for an integrated solar fuels generator.”

Another author, Chengxiang Xiang, co-leader of the JCAP prototyping and scale-up project, says, “JCAP’s research and development in device design, simulation, and materials discovery and integration all funneled into the demonstration of this new device.”

Their paper’s title, “A monolithically integrated, intrinsically safe, 10% efficient, solar-driven water-splitting system based on active, stable earth-abundant electrocatalysts in conjunction with tandem III-V light absorbers protected by amorphous TiO2 films,” almost gives the plot and surprise ending away.  The paper is available in several formats on the university web site.

Other Caltech coauthors include graduate student Erik Verlage, postdoctoral scholars Shu Hu and Ke Sun, material processing and integration research engineer Rui Liu, and JCAP mechanical engineer Ryan Jones. Funding was provided by the Office of Science at the U.S. Department of Energy, and the Gordon and Betty Moore Foundation.