Barnaby Wainfan is an aeronautical engineer with Northrop Grumman and famous for at least two things: his Edison 2, a light car with incredibly low Cd  that won the Progressive Automotive X-Prize in the Mainstream class and his FMX-4 Facetmobile, an airplane that looks like a private pilot’s F-117 and flies stably and safely.  (Video courtesy of Barnaby Wainfan.)

Wainfan told the eighth annual Electric Aircraft Symposium audience that short takeoff and landing (STOL) performance is relatively easy, requiring low wing loading and high power.  Efficient (e)STOL is harder. The problem is getting a reasonable cruise speed and good range with the big wing required for short takeoffs and the high drag required for short landings.  He advised his audience to specify the mission, not the aircraft – with the final airplane flowing from the mission.

Short takeoff rolls require light wing loading to allow early liftoff at low speeds, and allow best propeller efficiency.  High power allows quick acceleration to the needed liftoff speed, and is necessary to overcome the high induced drag that come with high lift at low speed.  A high angle of climb is necessary for obstacle clearance (the 50-foot tree at the end of the short runway), but puts an airplane on the back side of its power curve – a tricky place to be.

The elements necessary for a quick, steep takeoff and climb out are contrary, though, to the high wing loading and low drag configuration needed for high speed flight.

Takeoff and landing distances must be similar for the STOL to be successful, according to Wainfan. There’s little point in being able to land in a small area from which one won’t be able to take off.

More problems come in landing short.  A steep approach requires high-drag operation to allow a steep approach, obstacle clearance, and a quick stop after touchdown.  The low dynamic pressure at slow speeds, though, means flaps, slots, and other high-lift devices are less effective.  The problem is not trivial, and has led to a plethora of various active and passive approaches to creating high lift at low speeds. 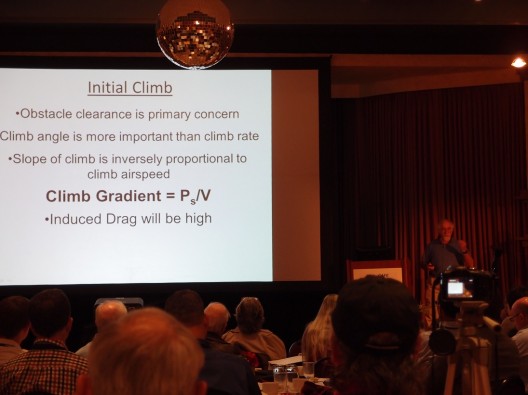 What goes up steeply…

He showed several slides defining major problems to be overcome in short takeoffs and landings and rounded out the presentation with some true “out of any box” thinking. 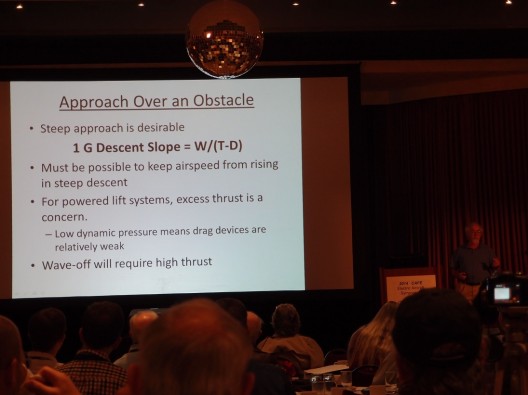 Must come down more or less equally steeply

high-lift concepts can be passive or active, including powered flow attachment devices that can be tremendously complex.  Wainfan discussed several options that might work well with electric propulsion, including direct power lift, distributed propulsion, and electric fan thrusters for low-speed control.  He included the high ratio of peak power to cruise power that others have demonstrated on aircraft such as Eric Raymond’s Sunseeker series and the two Solar Impulses, which cruise on about one-tenth the energy needed for takeoff.  Electric motors are compatible with vertical or horizontal operation, and are intrinsically quiet.

Taking a big leap (pun intended) Prospective Concepts Kanguruh used a pole-vault-like action to push it forward and up, a great deal like its namesake kangaroo.   You can find out more and see a video of the Kanguruh launching here.   Rotating cylinder flaps, tested on the North American Rockwell OV-10, gave a coefficient of lift of 6, about four times that of normal airfoils. These proved efficient enough that the cylinder would keep spinning long enough to generate enough lift for a safe touch down even if the drive failed on approach.  The Ryan VZ-3 Vertiplane used huge double flaps to divert airflow down and the Canadair CL-84 Dynavert used tilting wings and engines to provide high lift and low forward speed.   Dornier tried STOL with its Do-29.  Its twin pusher engines tilted down along with large flaps and allowed a touchdown speed of 15 mph.  Despite this success in flight testing, the project was not pursued.  Chance Vought used a low aspect ratio wing with large tip propellers on its V-173.  The wing’s interaction with the tip propellers improved its effective aspect ratio, according to Wainfan.

He concluded with a slide of several concepts that might be combined to create the ultimate eSTOL.  We can hardly wait to see what Barnaby Wainfan’s inventive mind will make of all this. 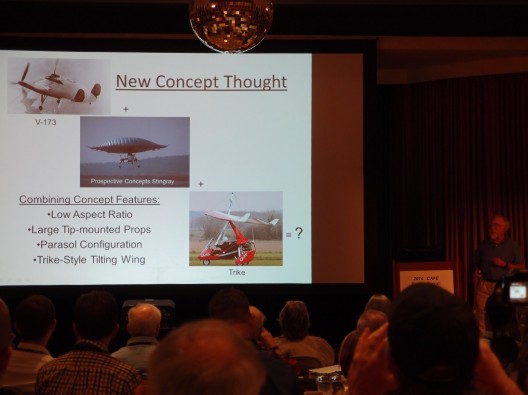 Low aspect ratio, inflatable wings on a trike chassis – could this be the next big thing?