MIT’s Technology Review reported last September that researchers at the Georgia Institute of Technology and Clemson University had formulated a way to keep silicon anodes in lithium batteries from cracking under the strain of expending and contracting while they charge and discharge. They added a “binding agent and food additive derived from algae” that is in turn derived from seaweed. This enables the anode to charge and discharge at an eight times greater rate than an equivalent carbon anode without breaking down, a common problem for “raw” silicon.

Environmentally friendly, the manufacturing processes for this type of anode are claimed to be clean and inexpensive.

According to the Technology Review, “Lithium-ion batteries store energy by accumulating ions at the anode; during use, these ions migrate, via an electrolyte, to the cathode. The anodes are typically made by mixing an electroactive graphite powder with a polymer binder—typically polyvinylidene fluoride (PVDF)—dissolved in a solvent called NMP (N-Methylpyrrolidone). The resulting slurry is spread on the metal foil used to collect electrical current, and dried.” 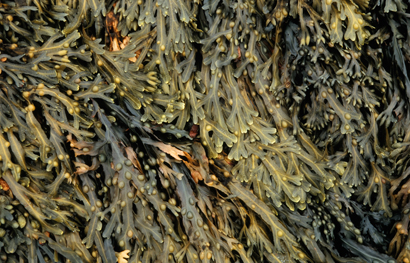 Seaweed already lives in an electrolyte

Swapping silicon for the graphite allows the anode to hold more ions and therefore make more power or store more energy.  Silicon particles can swell to four times their original size, though, and can put cracks in the PVDF binder, ruining the effectiveness of the battery.  A paper in Science by Gleb Yushin from Georgia Tech and Igor Luzinov of Clemson University explains that the seaweed alginate doesn’t crack and creates “a stable silicon anode” that demonstrates, “eight times the capacity of the best graphite-based anodes.”

Alginate made from brown algae provides the needed structural support for the anode and does not react chemically with the electrolyte.  Yushin and Luzinov chose seaweed after examining synthetic polymers made from land-based plant cellulose, and found the plant gave the uniformity they needed, and already spends its life in an electrolyte – seawater.

Extracting the alginate is fairly simple – boiling the kelp in soda water (Na2CO3) – and eliminates the use of solvents such as NMP.

MIT’s article points out one shortcoming. “The full potential of a silicon anode can’t be exploited until researchers develop a matching cathode capable of handling the same amount of lithium ions. But even with existing cathodes, alginate-silicon anodes could increase the capacity of lithium-ion batteries by 30 to 40 percent, according to Yushin.”

This has been true in most such research, regardless of the approaches taken by researchers, and seems to call for an integrated anode, cathode, and electrolyte program that would draw expertise from many disciplines.  To that end, other researchers including Igor Kovalenko, Alexandre Magasinski, Benjamin Hertzberg and Zoran Milicev from Georgia Tech; and Bogdan Zdyrko and Ruslan Burtovyy from Clemson, are carrying on further research intended to “boost performance of their electrodes and better understand how the material works.”

Research will continue on the current materials, but researcher will also look at other alginates.  Science Daily reports that, “Alginates are natural polysaccharides that help give brown algae the ability to produce strong stalks as much as 60 meters (almost 200 feet) long. The seaweed grows in vast forests in the ocean and also can be farmed in wastewater ponds.

“’Brown algae is rich in alginates and is one of the fastest-growing plants on the planet,’ said Luzinov, who also is a member of Clemson’s Center for Optical Materials Science and Engineering Technologies (COMSET). ‘This is a case in which we found all the necessary attributes in one place: a material that not only will improve battery performance, but also is relatively fast and inexpensive to produce and is considerably more safe than the some of the materials that are being used now.’”

The Royal Society of Chemistry’s Chemistry World reports researchers claiming, “Charge-discharge cycling performed with lithium insertion capacity limited to 1,200mAh per gram of silicon showed stable anode performance for over 1,300 cycles.”  Chemistry World tended to discount the uniqueness of the research, though, and reiterated the problem of anode-only development.

These are issues that science has a way of conquering through the process of demonstration and repeatability, and there are many of us anxiously awaiting the 10X battery that will make our electric airplanes a reality.