Jane Zhanf of Silk Wings Aviation (see note), an aircraft consulting firm, commented on an earlier post about the RX1E, an airplane designed by Shenyang University students and demonstrated at two airshows over the last two years.  Similar to the Yuneec (GreenWings) E430, it is a totally different design. 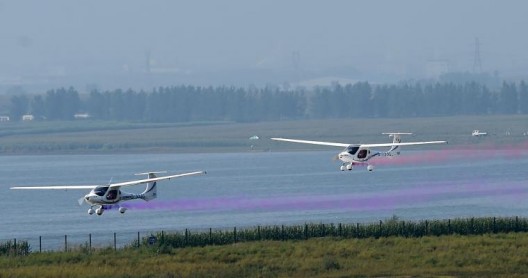 “By the way, Yuneec E430 is not widely known in China, not an excuse for the wrong claim of being #1 from China though.  (Editor’s Note: The E430 is being developed by GreenWings, now based in California.  It uses a Yuneec motor.)

“Given FAA and EASA don’t support electric SLSA (Special Light Sport Aircraft – allowed to be used for instruction by the FAA) yet (correct me if wrong), RX1E maybe world first “certified” electric LSA.”

The European Aviation Safety Agency (EASA) has apparently allowed flights by the Pipistrel WattsUp at the Blois, France fly-in last year and demonstrations by Tine Tomazic at the airplane’s home field in Slovenia.

The Federal Aeronautics Administration currently doesn’t interfere with users flying single-seat electric aircraft, but does prohibit flight by two-seaters.  This will have to be sorted out before planned instructional aircraft from Airbus, Pipistrel and Aero Electric Aircraft Corporation become common sights in our skies.  It is interesting that China has led the U. S. in this innovative arena.

Thomas Boyle made this clarification: ” You’re almost right. The FAA will allow single-seat aircraft, but not two-seaters, and you cannot certificate even a single-seater as E-LSA or S-LSA. Also, no-one operating under Sport Pilot privileges can fly an aircraft with an electric motor, even if it is normally certificated and otherwise meets the light-sport definition. A consequence of this is that if AEAC is able to certificate its electric trainer, pilots flying on Sport Pilot privileges will not be legal to fly them.”

“I looked recently and couldn’t find any evidence that the draft update to 8130.2 (prohibiting carrying passengers in electric aircraft) has been made final.

“As far as I know, Yuneec/GreenWing can still fly two people in their N-numbered e430/GW430 prototypes in California.”

There’s still a bit of fog over this issue that’s important to those of us in the electric aircraft movement.