California Institute of Technology (CalTech) floats this imaginary trial balloon to elicit interest in a new material developed by materials scientist Julia Greer and her colleagues.  “Imagine a balloon that could float without using any lighter-than-air gas. Instead, it could simply have all of its air sucked out while maintaining its filled shape. Such a vacuum balloon, which could help ease the world’s current shortage of helium, can only be made if a new material existed that was strong enough to sustain the pressure generated by forcing out all that air while still being lightweight and flexible.”

Not only are the scientists achieving the strong, lightweight part of the equation, they are “on the path” to making their new material “non-breakable” and able to return to its original size and shape when squished.

As described in her talk shown above, she and her group turned to architectural solutions, only making their bridge-like trusses at the nano scale – where things work very differently.  It’s a bit like the material side of quantum mechanics.  In this case, ceramics, normally extremely strong but exceedingly brittle, become flexible like NERF (Non-Expanding Recreational Foam for those who wondered what the name meant) – not a typical ceramic reaction to compression. 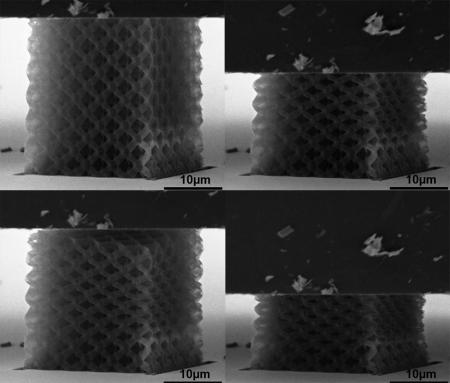 A Greer Lab nanolattice compressed.  Notice the scale of these cubes

Greer’s ceramic contains about 99.9 percent air and is deposited on a sub-microscopic scaffold that gives the material its structural shape.   She performed earlier magic working with researchers at HRL Laboratories making a microlattice of hollow metal tubes.  The blog reported on that in 2011.

Turning this same type of structural concept to ceramics presented challenges, though.  Greer says,“Ceramics have always been thought to be heavy and brittle. We’re showing that in fact, they don’t have to be either. This very clearly demonstrates that if you use the concept of the nanoscale to create structures and then use those nanostructures like LEGO® to construct larger materials, you can obtain nearly any set of properties you want. You can create materials by design.” 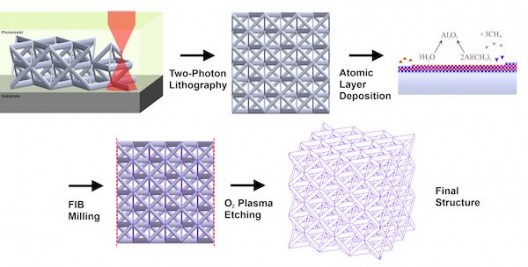 Greer’s team made the ceramic nano-trusses by 3-D “printing” with polymers using something called two-photon interference lithography.  They then coated the lattice with a ceramic such as alumina.  After that, the team etched out the polymer with an oxygen plasma, ending up with a lattice of hollow ceramic tubes.

Different tube wall thicknesses can control how the material fails.  Thick walls cause the ceramic to shatter under pressure, much like a tea cup when dropped.  Thinner walls, around 10 nanometers thick, buckle under compression but recover their shape when the pressure is removed.  Some structures could be compressed by as much as 85 percent and still recover.

Greer’s lab showed that by changing the thickness of the tube walls, it’s possible to control how the material fails. When the walls are thick, the ceramic shatters under pressure as expected. But trusses with thinner walls, just 10 nanometers thick, buckle when compressed and then recover their shape.  The team produced hollow-tube alumina structures with walls ranging in thickness from 5 to 60 nanometers and tubes from 450 to 1,380 nanometers in diameter.

Surprisingly, the density of the ceramics used can be compared to balsa wood, although the ceramics in their nanolattice structures would have better strength- and stiffness-to-weight ratios than the wood.

Greer thinks the applications for this technique are practically limitless, including the making of artificial bones that might have better characteristics than the real thing.  The scaffold alone could allow a patient’s own cells to coat the lattice.  Because coatings could include conductive materials, Greer is working with Bosch in Germany to find possible applications for this nano-technology in batteries.  The ultra-porous nature of the lattices would certainly seem to allow extremes of lithium intercalation.

The Greer lab is also investigating ways to produce these structures at mass scales, with processes like roll printing as one possibility.

Imagine a future, as Greer says, in which a giant cargo airplane would weigh no more than the scale model of that craft.  This is not idle speculation, because Dennis Bushnell, Chief Scientist at NASA’s Langley Research Center has posited the identical possibility.  This type of thinking will change the way in which we think of structures, propulsion, and a host of other elements.  This could get interesting.

One more thing, unrelated to the topic of structures and nanomaterials: Julia Greer is also an accomplished pianist, According to her CalTech biography.  “Julia has also been pursuing her ‘secondary career’ as a concert pianist – having studied at the Moscow’s Gnessin School of Music, the Eastman School of Music, the San Francisco Conservatory of Music, and at Stanford. She has performed numerous solo recitals (most recently at Caltech’s ‘Off the Clock’ event in 2011), chamber music concerts (most recently in Lagerstrom Series at Caltech with violinist C. Kovalchik), as well as a soloist with an orchestra (most recent performance of Brahms’ Piano Concerto No. 2 with the Redwood Symphony).”

She appeared as a guest on a Discovery Channel show in the spring of 2012, hosted by Adam Savage and Jamie Hyneman from Mythbusters!