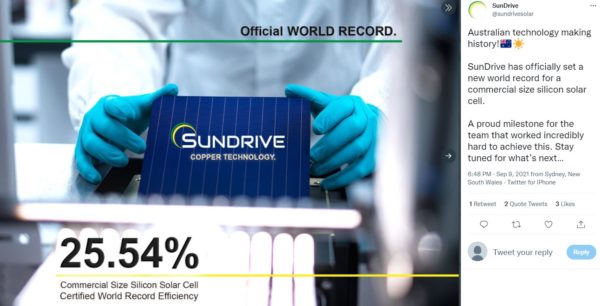 Solar cells are older than we perhaps knew, and their efficiency was low in their early development.  They were also remarkably expensive.  Today, though, materials like perovskite are making new, less-expensive and reasonably efficient cells possible.  Swapping copper for the more expensive silver conductors may help make these cells even more rewarding.  In a further development, a simple plastic film wrap may make perovskite cells safer.

A Long History of Low Efficiency

Considering that modern solar cells are made of sand melted down and turned into high-purity silicon, we have seen efficiencies increase and prices drop.

Notice that no commercially available solar cells break the 40-percent efficiency level, and that most don’t top 25 percent.  Those in the upper ranks are extravagantly costly for the small increase in efficiency – but that’s not a problem in many aerospace applications. 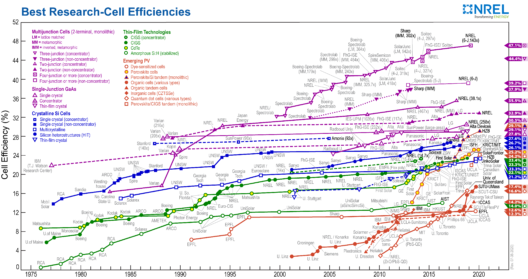 Click here to see an expanded version of this graphic

Eric Raymond made the first solar-powered flight across the United States in 1990, with solar cells that delivered perhaps only two-percent efficiency.  According to the French version of Wikipedia:

“The surface of the aircraft is covered with 700 photovoltaic cells distributed over all the horizontal planes of the aircraft: wings, beam and horizontal tail which is made possible by the new flexible cell technology.  The 600 wing cells are larger, 110 mm x 115 mm (4.33 x 4.52 inches), than the 100 cells distributed over the smaller elements: 55 mm x 115 mm (2.17 x 4.52 inches).  They offer a total of 8.22 [square] m (88.48 square feet) of photovoltaic cells.  The downside of these flexible cells is their low efficiency, announced at 8% or even 13% but ultimately close to 2%,  These performances are also expected to deteriorate rapidly over time: they only deliver 85% of their initial energy after one year, then 70% after three years, before the performances stabilize until their end of life. (cells have a lifespan of five to six years).  These cells produce 2.5 A of continuous current at 160 V in open circuit and 120 V in load.  The 300 watts of current produced is managed by an FET power controller which supplies the synchronous motor with 110 VAC.” 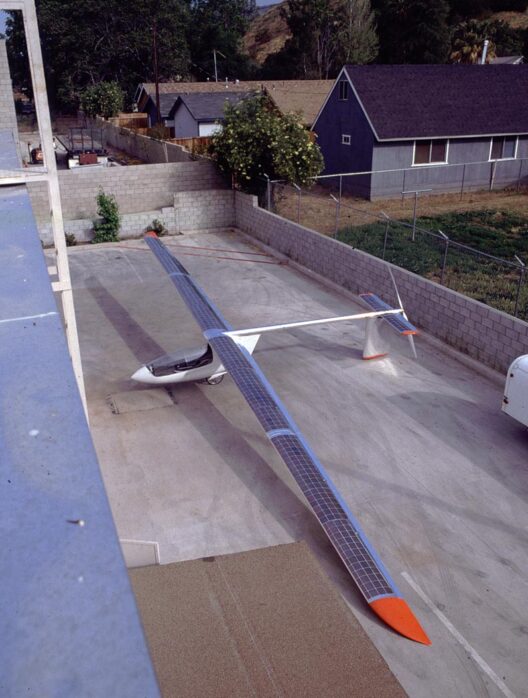 Eric’s Sunseeker 1 was a marvel of light-weight construction, the basic airframe reputed to weigh a mere 44.45 kilograms (98 pounds).  23 years passed before Solar Impulse made somewhat the same crossing.

Twenty-three years brought considerable improvements in solar cells, though.  So 2013’s Solar Impulse experienced the benefit of those improvements, flying with cells that netted 23-percent efficiency.

As their site explains they used, “More than 17,000 solar cells, collecting up to 340kWh of solar energy per day and representing 269.5 m2! (2,900 square feet)” It still took all that to make the jumbo jet-size machine cruise at ultralight speeds.

The cells on Sunseekers and Solar Impulse 1 and 2 were pricey, so current developments with inexpensive perovskite are of interest.  The first edges the efficient of perovskite cells slightly above that of silicon cells by using copper in place of silver conductors.  The second reduces the harm the lead in perovskites can do.

Being able to eliminate the use of silver, which costs $308.03 per pound, and use copper at $4.30 a pound helps considerably in lowering cell costs.  That essentially one of the solutions used by SunDrive Solar, co-founded by Vince Allen and David Hu, both from the University of New South Wales in Australia. 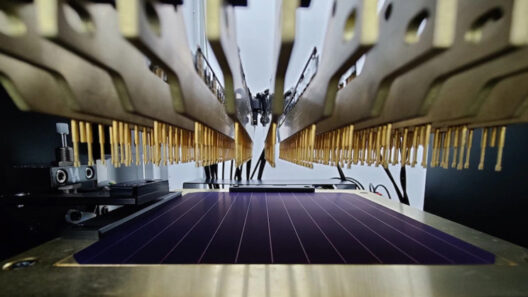 This efficiency surpassed the previous world record of 25.26 percent, held by LONGi Solar, “the world’s leading manufacturer of mono-crystalline solar modules.”  The company had revenues of over $8 billion last year, with sales worldwide, primarily in Australia and Southeast Asia.

An the IDTechEx report on Energy Harvesting Microwatt to Gigawatt: Opportunities 2020-2040, explains, “What makes the SunDrive achievement even more remarkable is that they use copper to pull the electrical current from the cells rather than silver, which is the industry standard. Copper is around 100 times cheaper as a raw material than silver, and much more widely available, meaning the cost of solar modules could plummet if the technology is developed further.”

UNSW Professor Alison Lennon, from the School of Photovoltaic and Renewable Energy Engineering, mentored many of the team and is now a SunDrive advisor.   Obviously proud of her students’ achievement, she says, “This really is a ‘David versus Goliath’ story in the solar panel industry, and it has caught the interest of the Chinese photovoltaic industry. A lot of people, including myself, have spent many years trying to demonstrate that copper is an economically viable and sustainable alternative to silver. We’ve never been totally able to convince the industry, but that’s what Sundrive have done with this world record

She adds, “If manufacturers can now use this technology to produce power at a much lower cost per watt, then that will be passed on to the consumer.”

With increased efficiency from the cell, you also get more power for the same area of solar panel. So, for a homeowner with a fixed roof area, you can generate more power each day. As well as all of that, there is also a sustainability aspect. In order to limit global warning, we will need to install terawatts of solar panels. This will require a lot of metal. Silver is a limited resource and as it becomes more and more scarce, its price will go up so the cost of producing solar modules will rise as well. Mining silver from lower quality ores also produces more emissions, making the problem worse. Copper is much more available as a resource, it’s cheaper and it’s also easier to recycle. The metal from copper-plated solar modules will be easier to recover from old modules and therefore may be more easily recycled in the future. This helps enormously from a sustainability perspective.”

Keeping the Lead In

One issue with perovskites is the presence of lead in the low-cost rocks comprising the bulk of the material.  Scientists at Northern Illinois University and the U.S. Department of Energy’s (DOE) National Renewable Energy Laboratory (NREL) in Golden, Colorado have come up with a “cost-effective” solution.  A Scotch-tape™ like film “is bladed onto standard solar ethylene vinyl acetate (EVA) film.”  This lead-absorbent film can capture 99.9 percent of leaked lead if the solar cell is damaged, enhancing safety even in difficult circumstances. 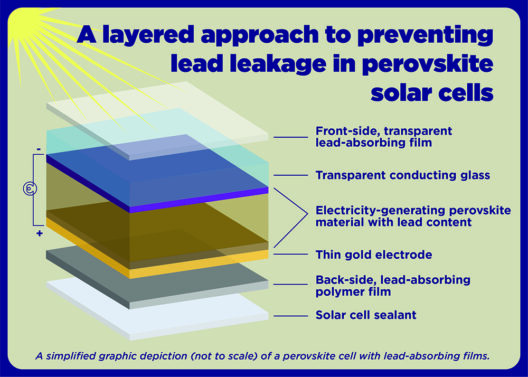 Leakage can be harmful, even leached lead from old cathode ray tubes in landfills can contaminate groundwater.  Unshielded perovskite cells on roofs would leak lead into downspouts and eventually groundwater and local streams.  The team notes their approach clean up that runoff to a level, “Safer than the standard for drinking water.”