Dr. Brien Seeley, Founder and President of the CAFE Foundation, has been giving a series of talks at the Experimental Aircraft Association’s AirVenture 2013, before a gathering of technical experts at NASA’s Dryden Flight Test Center, Edwards Air Force and at the American Institute of Aeronautics and Astronautics (AIAA) International Powered Lift Conference in Los Angeles.

The International Powered Lift Conference focuses on the latest developments in Vertical or Short Takeoff and Landing (V/STOL) aircraft research, concepts, and programs, something of great interest to CAFE in its development of airplanes capable of using pocket airports. 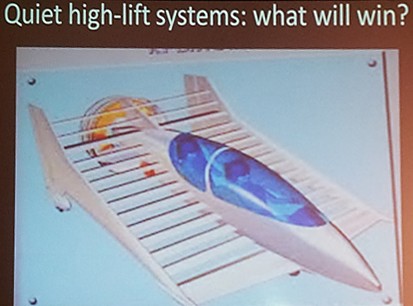 Could a quiet, electric, STOL airplane look like this? Airplanes will be different after the GFCs

Pocket Airports will require a special type of airplane – electric, according to Dr. Seeley, and capable of taking off with a ground roll of 90 feet (home plate to first base), able to climb at an angle that would clear the 150-foot Matterhorn at Disneyland by the time it reaches the end of a 420-foot runway, and being nearly inaudible as it crosses the airport threshold.

These seem like a conflicted series of irreconcilable requirements, but Dr. Seeley has shown his many audiences the technical breakthroughs that are or will be available soon to resolve this conflict.

The video is one hour, 24 minutes, but worth the time to see a broad-reaching review of the technology that could bring about a transformational change in private aviation. It also helps show Dr. Seeley’s grasp of the problems and solutions involved.

Starr Ginn, Chief Engineer of Flight Research at Dryden, introduces Dr. Seeley at NASA Dryden. A member of the AIAA Transformational Flight Program Committee with Dr. Seeley, she is also on that committee’s Challenge Prizes Working Group sub-committee. Her husband, Tony Ginn, also of Dryden, directs flight research there. Tony was at the Green Flight Challenge (GFC I) as NASA’s official judge.

Even the Governor’s program of planning and research in California has expressed support for such competitions.

To help a two-seat Sky Taxi reach takeoff speed in a short sprint, CGFC II (CAFÉ Green Flight Challenge II), scheduled for 2014 will require wheel motors that can taxi the airplanes, then accelerate them to 45 mph in only 90 feet. A $1 million prize will accelerate competitors to sign up.

Pancake motors in wheels on a Runway Acceleration Simulator might make the competition look like a very tightly constrained drag race.

Could wheel motors accelerate this airplane to 45 mph in 90 feet?

CFGC III will ask competitors to achieve the lowest noise level in dBa during the acceleration of a 600 kilogram, (1,320 pounds – the maximum allowed weight for most Light Sport Aircraft) Propeller Acoustic Simulator at 0.3g’s through 50 mph. This 2015 contest will have a $2 million prize. Technologies could include automatic noise reduction propellers, which would use a variety of aerodynamic tricks to achieve low noise levels, or more complex approaches such as tri-coaxial hub motors using contra-rotating propellers of different designs that would cancel out the other props’ noise.

Because Sky Taxis will eventually fly autonomously, the 2016 GFC IV prize of $3 million will go to the craft that can garner the most points during 4D flight, “4D” including time as an element in flight planning and execution. Airplanes would get points for taxiing, taking off, following a 4D flight path, avoiding potentially hazardous traffic, staying within the airplane’s flight envelope, making a pin-point landing and a simulated dead stick landing (with a safety pilot on board).

CGFC V could be most challenging, given the normally mutually exclusive facets of the required performance. A fast, electrically driven, short-takeoff-and-landing vehicle (E-STOL), called for in the 2017, $3 million prize event, will be a challenge to even the most seasoned designers.

Could a future electric light twin look like this? Could it land and take off from a pocket airport?

Dan Raymer showed an idea for a morphing airplane to allow both STOL and fast cruise at this year’s Electric Aircraft Symposium, with wings that slide in and out of a center section to allow a speedy cruise and extra-slow takeoffs and landings. The winner in this Challenge will be the fastest in an FAI (Federation Aeronautique Internationale) 3 kilometer speed dash – after demonstrating 32 mph controlled level flight, and registering 65 dBa or less, at 125 from a sensitive microphone in a 45 mph fly-by.

The Sky Taxi Finale in 2018, GFC VI will award $4.5 million to the aircraft which combine the attributes necessary to provide the kind of service travelers will come to love.

Overall, the Challenges will cost only $3.1 million per year, and if results are as good as those for GFC I, there could be the 245 million pilots flying America’s skies that Dr. Seeley envisions as an outcome for these competitions. They will be able to luxuriate in quiet, safe travel, free of traffic jams and TSA pat-downs.  Just being able to keep one’s shoes on will make it all worthwhile.