Shown at the E-Flight Expo at Friedrichshafen’s Aero 2015, Stuttgart University’s e-Genius had an aerodynamic-looking pod next to one wing, containing an ENGIRO range extender consisting of a Wankel-type engine and a generator.  The unit could, as its name implies, help e-Genius go for new records to add to its already significant collection.

Bill Lofton at EV Hangar has detailed the extender, now associated with the e-Genius and in a larger variant on the Equator P2 amphibian being built in Norway by Tomas Broedreskift. 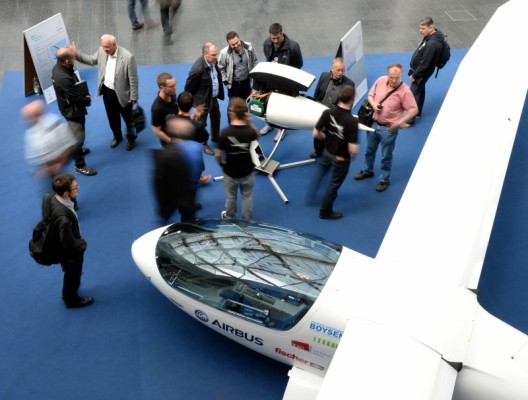 Aixro/ENGIRO Hybrid pod next to e-Genius at Aero 2015

Equator’s web site describes its power system: “The hybrid propulsion system being developed by Equator is called EHPS (Equator Hybrid Propulsion System). The engine specific project is being co-funded by Transnova and the company doing the development work with us on this is ENGIRO. We will design a custom engine and generator specified specifically for the P2. Power out in the prop is 100kW (approx. 130HP) and the generator will produce 57-60kW of power charging the batteries. The combustion engine will be a Wankel engine that runs on bio-diesel fuels and jet-fuel. The fuel tank can hold 100l and this should give you a flying time of 5-6 hrs. max.” 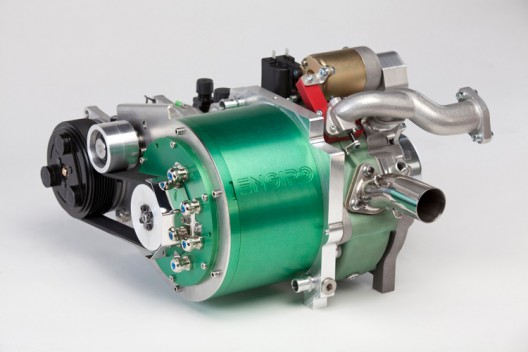 Engiro RE15-1 hybrid generator unit with Wankel engine on right, generator on left.  20 kW model is identical, but turns over faster

The version on the e-Genius is the smaller 20 kilowatt model, comprising an Aixro Wankel engine and “a permanent excited synchronous machine (most compact electrical machine)” generator.  The demonstrated efficiency of e-Genius, having set seven world records in two days in July, 2014 with Klaus Ohlman at the controls, was reported by Soaring Café:

Given the clean nature of e-Genius, having toured the Green Flight Challenge course in 2011 at a fuel economy equivalent to 387.3 passenger miles per gallon at over 100 mph, a range extender on less than full power would enable extremely long flights while recharging the airplane’s batteries, and maybe allow removal of some of the 300 kilograms (660 pounds) carried by e-Genius.

Even an expensive (the engine costs $5,450 minimum from an American supplier) range extender would cost less than several hundreds of pounds of lithium batteries, and the energy density of a non-fossil fuel would keep economies high. 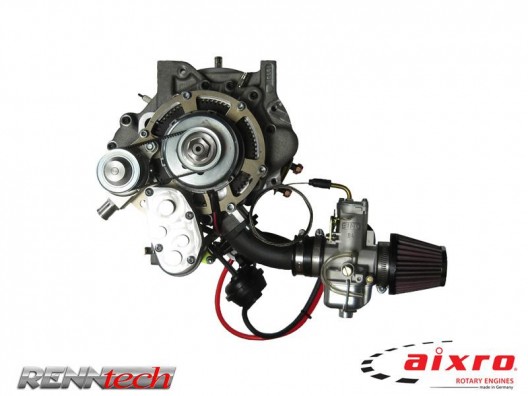 The Aixro XF40 Wankel engine, a higher-speed, higher output version of the engine on the e-Genius hybrid pod.  Unit puts out 35 horsepower at 6,500 rpm, weighs 41.2 pounds

RennTech Karting, a distributor in Florida, sells the Aixro engines, and even has an aeronautical version.  It’s rare to see a manufacturer and distributor willing to take on the challenges of aerial applications, so this may have some potential for American homebuilt aircraft types to try their hand at creating a domestic hybrid.

(Editor’s Note: Howard Handelman, a friend of the blog, sends this long, but helpful addenda.  You may notice he has opinions:

Since jet fuel / diesel is heavier than petrol, the same liters would weigh more and the SFC would be higher (worse). However, the 5 liters for 20 HP is based on petrol (benzine on the engine maker’s website).  They have not, apparently, said how they will get past the notoriously thirsty nature of the Wankel style rotary.

Here is a math problem, then: where is the sweet spot in price, the sweet spot in weight, the sweet spot in complexity and failure modes? If we design for an extender and admit that it costs less to buy an engine than the requisite batteries, why not minimize the batteries to only what is needed to provide take-off and/or emergency climb ability?  A pure electric will make sense someday when the battery problem is “solved”. When that day comes I would be up early to get in line but not before.
I like the idea of using a gen-set and a minimum battery with a very capable electric motor that can be amazingly good on power vs weight, reliability, speed and torque control, etc. The gen-set can be optimized to compete with a leaned-out big Conti because it can run at the perfect speed and load. But this differs from the usual concept of a range extender because I would start with the idea of the minimum battery, not simply swap battery for engine as your article suggests. Am I reading too much between the lines? If so, I apologize for that, too.
If we ignore the issue of the evilness of see-oh-too then we can see that carrying stored electrical energy around will only make sense when it is cheap and light. Most electric and hybrid cars are in actuality coal-powered for now. That’s a double whammy: we don’t have a good way to generate the electricity and we don’t have a good way to store and schlepp it. But using just enough of that to let us use an optimized engine with perfect prop speed and torque control can be advantageous.
Here is a link to an engine maker that claims they can get below .4 pounds SFC:
http://www.freedom-motors.com/index.php?option=com_content&view=article&id=55&Itemid=73
They are saying they are under .45 now and “expect” to get below .40 with stratified charge and direct injection.
Here is a link to “Liquid Piston” which claims it can do much better than that:
http://www.gizmag.com/liquidpistol-rotary/24623/
liquidpiston.com
They are not for sale yet but claim to have signed a contract with DARPA for $1mil to develop for them.
The Duke Engine claims to be at .39+ under laboratory conditions and believes that will improve when development continues.
I wonder if the advancements in hydrogen production will break this logjam either as a combustible fuel in a setup like this or maybe just in a fuel cell?)