Dr. John S. Langford is the Chairman and CEO of Aurora Flight Sciences Corporation, which he founded in 1989.  He has Bachelor’s, Master’s and Doctoral degrees from MIT in Aeronautics and other disciplines. While at MIT, he led a series of human-powered aircraft projects, culminating in the Daedalus Project, which in 1988 made a 72-mile flight between the Greek islands of Crete and Santorini.  He was just named 2014 winner of the National Aeronautics Association’s Cliff Henderson Trophy, awarded for “…a living individual, group of individuals, or an organization whose vision, leadership or skill made a significant and lasting contribution to the promotion and advancement of aviation and aerospace in the United States.”   He shares the honor with earlier winners including Anne Morrow Lindbergh, Lieutenant General James H. Doolittle, Senator Barry M. Goldwater, Clarence L. “Kelly” Johnson, and Scott Crossfield, among others.

He started his presentation, “The Manned Unmanned Aircraft: Where the UAV Revolution is Headed,” explaining that aviation growth tracks the gross domestic product (GDP) of the country.  Composites, glass cockpits and full aircraft retrieval parachutes have failed to bend the curve, while in stark contrast; unmanned aerial systems have experienced exponential growth.  Unmanned systems have become smarter, safer and more versatile, reliably performing tasks such as data collection and relay, weapons delivery, cargo delivery, and passenger carriage and casualty extraction in hazardous situations. 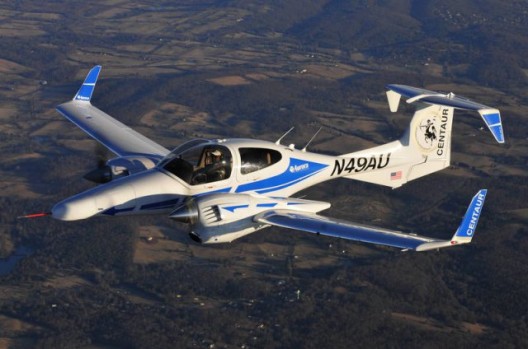 He looked beyond the recurring question, “Where’s my jetpack?” to examine what it would take to provide realistic point-to-point, on-demand commuter aviation.  Anyone with a driver’s license could join this not-too-exclusive club and be taken on a safe voyage to their destination.

His firm’s research for the Autonomous Aerial Cargo/Utility System (AACUS) research program and demonstrated success with over 20 remotely-piloted or autonomous aerial vehicles would enhance the security a passenger would feel in a flight in Aurora’s Centaur, a self-flying adaptation of a Diamond DA-42 twin-engine aircraft.   The video includes the aircraft taking off and landing on its own without help from its human safety pilot.  Dr. Langford says Aurora is driving toward highly automated aircraft that can operate in airspace with or without a pilot on board.  The airplane could be flown to a site by its two-man crew, configured to fly as an autonomous craft and upon completion of its mission, be flown to its home base by its crew.  This mix of manned/unmanned capabilities will probably inform initial designs for a Sky Taxi.

Aurora has developed many types and sizes of unmanned systems, ranging from the SunLight Eagle Program (SLE) in 1989 that served “as a high-altitude test platform for sub-systems and small payloads designed for long-duration missions.” The solar-electric craft, derived from the Daedalus human-powered airplane retained the original’s 114-foot wingspan and weighed a mere 175 pounds gross takeoff weight, including sensors.  SLE was the basis second-generation solar electric aircraft optimized for flights at altitudes above 25,000 feet. 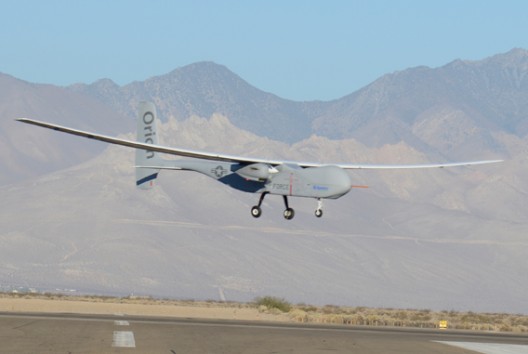 Since then, Aurora has built a HALE (high altitude long endurance) aircraft, a series of helicopters and vertical takeoff machines, and now concentrates on the Centaur, the Orion, a large UAV that can stay aloft for up to120 hours and carry up to 2,600 pound payloads; and the Skate.  The latter is a 2.2-pound (including batteries and sensors), 24-inch wingspan vertical takeoff and landing machine that can be hand-launched and flown for about 60 minutes to observe subjects of interest to peace officers or peacekeepers. 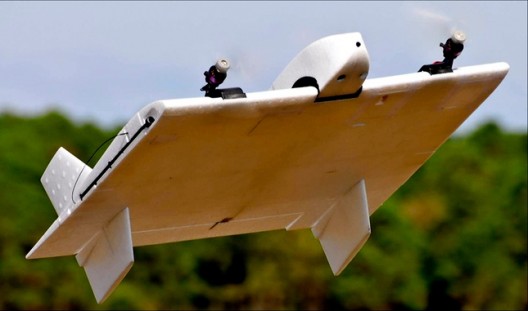 Skate is a mini-UAV capable of low-altitude surveillance.  motors can tilt to enhance VTOL operation

Besides researching extreme high-altitude power systems for UAVs, the firm is exploring bio-inspired sensors, using technology such as echolocation, similar to the emitted and reflected sounds bats use to navigate.  They are also looking at optic flow, the changes in light caused by the relative motion between a sensor or camera and the changing scene around a surveillance machine.

Many of these technologies are or will be incorporated in Aurora’s pan optic sensor head.  This type of competence helped Aurora win an Office of Naval Research contract to demonstrate a system that enables an untrained operator to land an unmanned helicopter using a software application on an Apple iPad mini.

Using LIDAR, electro-optical sensors and new control software, the aircraft scans the landing zone for obstacles that might otherwise be invisible in the blowing snow.  The operator may select the landing zone, but the sensors sort out the obstacles, and if safe, proceeds to land.  Otherwise, it provides the operator with “three feasible alternatives,” according to a Flight Global article.

Such far-ranging capabilities will be welcome in guiding CAFE’s Sky Taxis to happy landings in all weathers.