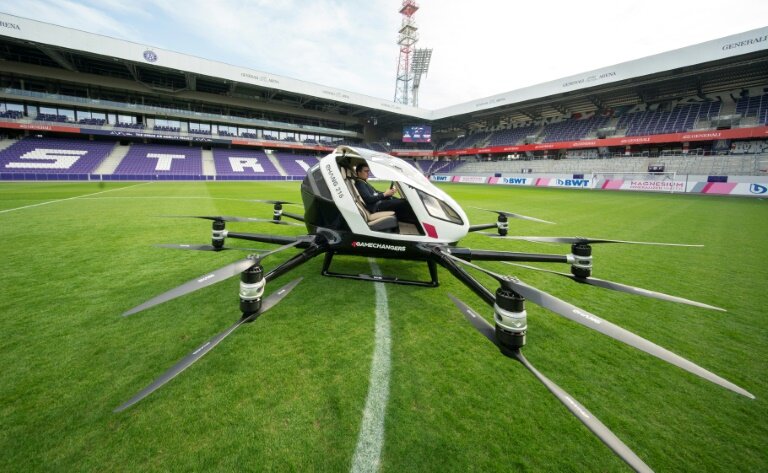 Well, 17 passengers, anyway.  Remember that EHang flew its entire board of directors and executive team on demonstration outings in February 2018.  In a more recent flight, EHang CEO HU Huazhi “commuted” via an EHang 216 (2 passengers, 16 motors and propellers).

In April this year, EHang flew apparently happy participants at Vienna’s Generali Arena as part of the 4GameChangers Festival, an international festival of – you guessed it – game changers.  This year’s theme, “Europe Meets Asia,” seemed a mild precursor to the full frontal assault by EHang.  For those not lucky enough to get first-hand experience in the air, displays in the Festival offered virtual and augmented reality demonstrations and ample digitally-based thrills. 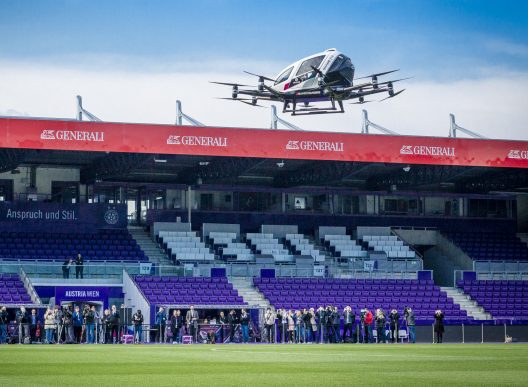 Aviation Week reported, “An autonomous, Chinese, two-seat urban transport vehicle is not one of the most anticipated sights on the exhibition floor at EBACE (European Business Aviation Convention and Exhibition), but in the realm of UAVs, things happen quickly. EHang, one of the earliest and most successful developers of such aerial craft, signed a joint agreement in Guangzhou last November with FACC of Austria, designer, developer and manufacturer of aerospace components and systems.”

FACC, (formerly Fischer Advanced Composite Components), a unit of the Chinese state-owned aerospace group Aviation Industry Corporation of China (AVIC) since 2009, is working to gain certification of EHang’s Urban Air Mobility (UAM) vehicles.  The combined companies are working with the Austrian government in an amicable arrangement that seems to be speeding the paperwork along.  This may be helped by the fact that “EHang is one of five local companies licensed on January 23, 2019 by the Airworthiness Department of the Civil Aviation Administration of China (CAAC), to establish a risk-based UAV airworthiness management system by the end of this year, with particular regard to the use of the craft for transporting cargo, inspecting powerlines and carrying passengers.”

Since the 216 is not yet certified in Austria, flights were limited to about 30-foot altitudes within the stadium.  Offering enthusiastic support, though, Austrian Transport Minister Norbert Hofer says, “We want to be at the forefront of this technology.  Thousands of drones will fly in Austria!” 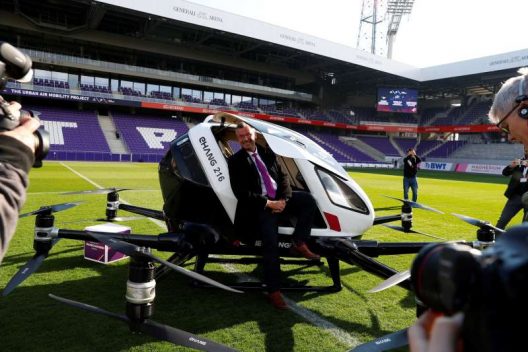 The 216 can fly up to 150 kilometers per hour (90 mph) for almost an hour , according to FACC CEO Robert Machtlinger; or ” between 50 and 70 kilometers depending on the payload.”

Unfortunately, with 16 fairly short propellers twirling quickly, the EHang generates 90 decibels of buzzy sound, something which the company says it is trying to reduce to below 75 dBa.   This will certainly be a point of contention in many countries’ efforts to certify these aircraft.

The interesting ties between the Chinese drone maker and the Austrian government are delineated in this interview with an enthusiastic Felix Lee,  Managing Directors of EHang’s overseas operations.