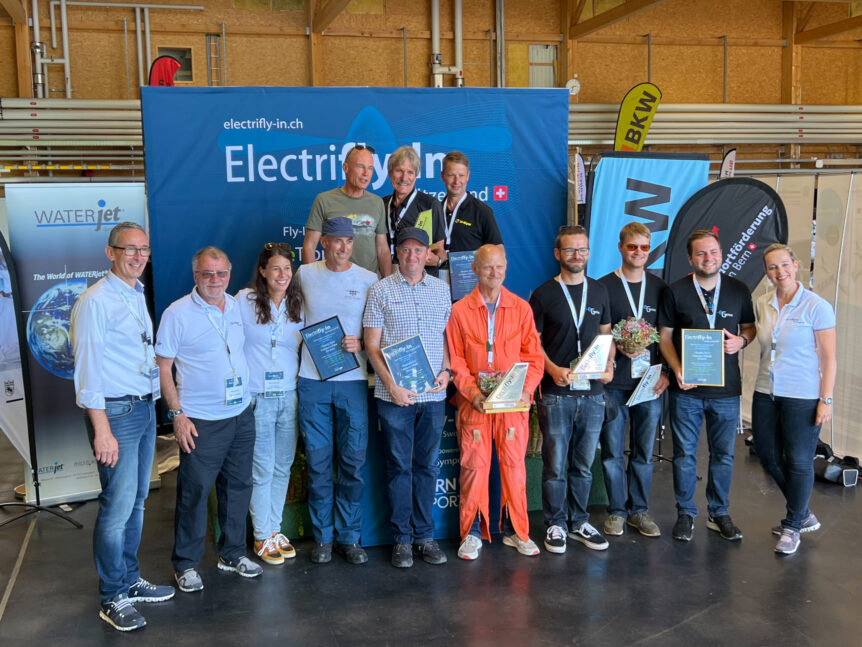 Electrifly-In Bern 2022 is a new location after five years at Grenchen, Switzerland.  The Electrifly-In moved about 25 miles down the road to Bern’s bigger airport.  Started by the designers of the SmartFlyer, an innovative hybrid touring craft, the event was originally called the SmartFlyer Challenge.

Organizers have the serious intent of saving aviation from the “shame” that has come to accompany flight itself.  “Aviation is pilloried by the public. Flying is seen as the main problem of the climate catastrophe and everyone who books a flight should have a guilty conscience and is labeled as a climate sinner. The social and political pressure to phase out combustion technology is steadily increasing worldwide. So the question is no longer if, but when electrically powered aircraft will become the norm.”  This year, the fly-in offered the public several defenses against sin and shame. 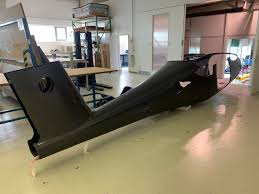 Smartflyer SFX1 fuselage fresh from Aerolite’s autoclave was on display

Beginning with the original namesake, the Smartflyer SFX1 was on display in the hangar, its carbon-fiber blackness showing the fine lines of the hybrid craft.  It will soon incorporate the Rotax engine and generator in the nose, feeding power to the drive motor extended from the vertical tail.

While the original Smartflyer hybrid concept has been augment by pure electric and hydrogen fuel cell alternatives, other craft attending this year’s gathering suggested a move toward more hybridization seems to be taking place.

As a showcase for hybrid, electric, and self-launching gliders, the fly-in is able to highlight a wide range of clean technologies.  An image of eGenius flying alongside PC Aero’s Elektra Trainer shows two approaches to design that are expanding range and endurance with hybrid systems. 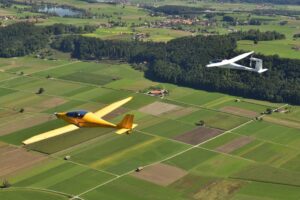 eGenius has used a variety of hybrid systems, although it managed 211 miles at over 100 mph in the 2011 Green Flight Challenge, frugally using only 375.7 passenger miles per gallon (electrical equivalent energy usage).  eGenius flew with a Sineton motor of 60 kilowatts (80 horsepower), that could achieve a maximum of 100 kW (130 hp.)  eGenius has flown with at least one other hybrid system, but is now using a range extended based on a three-cylinder Mercedes SmartCar Diesel engine, as shown near the end of this video.

Stuttgart University explains the use of the hybrid system and how environmentally friendly it is.  “We encountered a strong headwind on the 200km flight to Switzerland, which is why we used more fuel than usual (8.5L). This fuel however, was of the renewable kind supplied by our partner Neste and therefore has no net CO2-emission.”  Even with the range extender eGenius achieved 23.6 kilometers (14.6 miles) per liter, or 55.5 mpg – something that would be enviable in a passenger car at much slower speeds.

The Elektra Trainer is a much newer aircraft, and flies with a Geiger Engineering HPD-50D dual-rotor motor that provides redundancy.  We see its unveiling here, with its first customer, Uwe Nortmann, explaining its virtues.

Like eGenius, the Trainer is a sleek, lightweight machine and can fly on a mere 12 kilowatts (16 horsepower), enabling its 35 kilowatt-hour battery to keep it aloft for 2.5 hours with a healthy reserve.  The craft’s ability to leap tall mountains came in handy in its winning run to Bern.  “The other places went to the teams from Pipistrel and X-eye.  The eTrophy was about covering the longest distance on approach to the airport in Bern.  Our test pilot, engineer and sales manager Uwe Nortmann took off from the Pfullendorf airfield in Baden-Württemberg shortly before two-thirty on Saturday and covered the distance of 174 km (107.9 miles) in two hours and ten minutes.  During this flight, the Elektra Trainer had to overcome a headwind of over 25 km/h (15.5 mph), stronger gusts of wind and an area in the rain.” 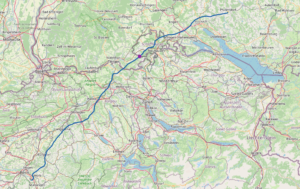 “On the flight home from Bern Airport to Pfullendorf, Uwe Northmann was able to clearly demonstrate the advantages of electric flying with the Electra Trainer to our team.  While our team on the ground had to take a break at a rest area near Zurich after a long period of standing in a traffic jam and still had another three hours to drive, Uwe celebrated the victory with his friends with a glass of sparkling wine and enjoyed a beautiful Sunday evening.”

Pie Aeronefts displayed parts of their Formula E racer and enabled virtual flight experiences.  The firm has at least two other high-performance vehicles waiting in the wings.  Story soon. 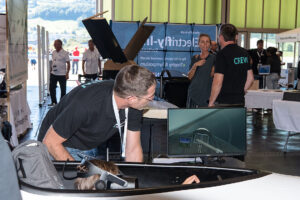 Numerous children put on the VR glasses and completed a virtual flight with the UR-1 from Pie Aeronefs. © Photo: Andrea Bolliger  (Cockpit Magazine)

E-Magic had the only eVTOL (electric Vertical Take Off and Landing) machine on static display.  The craft has demonstrated its ability to hover on its eight 15-kW motors and cruise at 144 kilometers per hour (89 mph) its 40 kW pusher motor.  The makers claim the combination of multicopter and aircraft gives five times the range of an equivalent helicopter.

The only eVTOL at Bern show, e-Magic One is shown here in a backyard setting

Students at ETH, the Swiss Federal Institute of Technology of Zurich, have developed two ways of flying a Sling four-seat touring aircraft.  The e-Sling Project Alpha will sport a 110 kW motor driven by a 50 kW-hr. modular battery pack.  With a range of only 200 kilometers (124 miles), that may account for Project H2, a plausible way to squeeze longer range from the aircraft.  Students had a booth and made a presentation during the weekend.

A compact show running two days, the fly-in has become the go-to scene for electric aircraft, second only to the annual Aero Expo in Friedrichshafen.  As its fame spreads, it will probably become even grander.