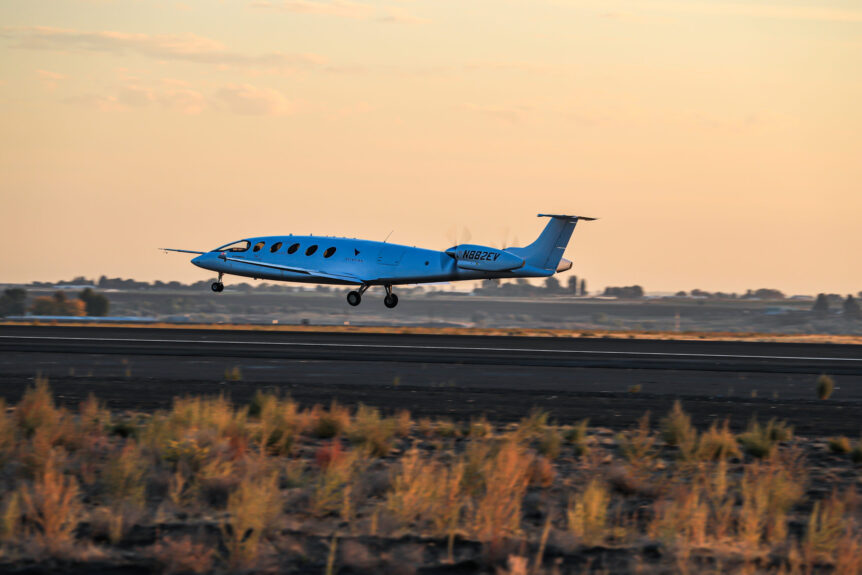 Eviation’s Alice flew today, a long-awaited event that might mark a new direction for regional aviation.  Alice has undergone extensive redesign and a restructuring of its business management team in the last year, but the new airplane finally took to the air.

It’s taken long enough that even a late-show host took pot-shots at it in singularly lame fashion.  Corden and his writers can do better.

Despite the jibes, and following a somewhat traumatic development period, during which an early prototype was heavily damaged by fire in a ground charging accident. Eviation moved ahead.  The firm moved operations from Israel to Arlington, Washington, within 15 miles of Everett-based motor maker MagniX.  There, the new design underwent construction, followed by motor runups and taxi tests.

“Along the ramp at the Moses Lake airport, more than a dozen journalists waited for the sun to rise around 6:50 a.m., and for the aircraft to take flight. The morning sky grew pink, with scattered clouds at about 4,000 feet agl, revealing a line of hangars and buildings that looked like a string of pearls along the runway. The morning air was crisp and cool, in the 50s Fahrenheit, with a very light breeze of about 2 knots.

“The experimental aircraft’s first flight lasted about 9 minutes, 3 seconds. Powered by twin, rear-mounted magniX650 electric motors, Alice flew a test-flight pattern above the airport before touching down back at Moses Lake.”

Potential for a Bright Future

Recent promises to buy, added to existing orders, make Alice’s future look all the brighter.  Cape Air had provisional orders 75 along with DHL’s order for 12 cargo versions of the craft.  Recently, Global X  (or Crossing) ordered another 50, creating an order backlog any aviation firm would envy.

That also means plenty of work for MagniX, supplying not only Eviation, but a large number of other companies entering the regional airline market.

The featured image comes from Flying magazine’ s coverage of the event. Eviation’s Alice, based in Arlington, Washington, breaking away on its inaugural flight. [Photo: David Honan]