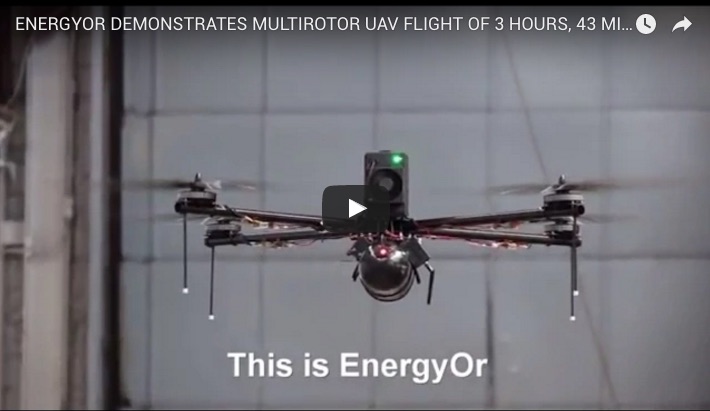 Staying airborne for more than an hour or two might seem like a huge leap for battery-powered electric aircraft.  Inspired designers like Eric Raymond have been able to use solar cells to extend their flights to near-perpetual states.  A large craft like Solar Impulse 2 remains in flight for up to five successive days and nights only through careful energy management and flight planning.  Researchers are looking at hydrogen fuel cells as an alternative to batteries, with the hopes of achieving greater endurance.

One company, EnergyOr, has developed two still small fuel cells to power their rotary- and fixed-wing drones, setting several records in the process.  With payloads and maximum takeoff weights that enable carrying a 4K camera or large hydrogen tanks for long range flights, EnergyOr’s aircraft have demonstrated their abilities.

The small experimental fuel cell described in our last entry is good news for small-scale drones – until the researchers scale things up to suit larger applications.  Their one-hour endurance is mainly a matter of volume, with compact dimensions not allowing a large fuel load, for instance.

A 2011, ten-hour flight with their Birdseye-derived flying wing, the H2 Endurance Demonstrator, powered by EnergyOr’s EO-310-XLE integrated fuel cell, proved the aircraft’s autonomous flight ability.  Although this is nowhere near the (slightly) over 48-hour flight of the Navy’s Ion Tiger, it demonstrates the same characteristics of the larger airplane, with comparable energy efficiency.

A report from the Laboratory for Autonomous Systems Research of the Naval Research Laboratory, explains, “The 550-W (0.75-horsepower) fuel cell has about four times the efficiency of a comparable internal combustion engine. The Ion Tiger flew for 26 hours in November 2009 while carrying a 5-pound payload using hydrogen compressed to 5000-psi in a carbon/aluminum pressure vessel. In May 2013, the same researchers at the U.S. Naval Research Laboratory flew their fuel cell powered Ion Tiger UAV for 48-hours and 1 minute on April 16-18 by using liquid hydrogen fuel in a new, NRL-developed, cryogenic fuel storage tank and delivery system. These 1-day and 2-day demonstrations prove that hydrogen fuel cells provide a clear path to long endurance electric flight: in comparison, the Ion Tiger would be able to fly for only 4 hours on the comparable amount of lithium batteries.”

While the H2 Demonstrator has a 370 Watt maximum continuous fuel cell, its lower payload capacity keeps it at this point from matching the endurance of the Navy’s aircraft.  It is, however, a commercially-available product – the first of its kind, according to EnergyOr.

In March, EnergyOR flew a near-four-hour test with their H2 Quad 400 rotary-wing drone in a hangar.  The flight was in some ways a bigger test than that for a fixed-wing craft, because the power generated has to lift the total weight of the vehicle, and not merely overcome the drag of a winged craft.

Indoor testing doesn’t count as much as “real world” outdoor testing, though, and in December, the company set a personal best of over two hours with  a 4K camera recording remarkably stable video.

All EnergyOr craft are motivated by the firm’s “fully integrated and self-contained” EPOD (Energy and Power On Demand) fuel cells.   Their EO-310-XLE produces a rated net output of 310 Watts, with a maximum of 450 Watts.  The EO-410-LE puts out a net of 410 Watts and a maximum of 470 Watts.  Both systems weigh under four kilograms (8.8 pounds) and come with a complete support system, including (according to the manufacturer): 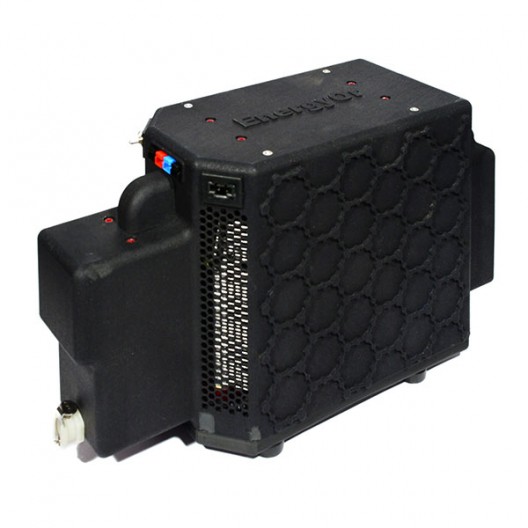 EnergyOr seems intent on scaling their systems up to power larger vehicles, as researchers at the Pohang University of Science & Technology (POSTECH) in South Korea anticipate doing.  A link to EnergyOr products “in development” shows a series of model numbers for fuel cells that suggest much larger energy and power outputs.  Perhaps our future ultralights might be fuel-cell powered.