Eric Raymond and his wife Irena fly their Sunseeker Duo from the Aeroporto Voghera Rivanazzano near their home in Voghera, Italy.  The Provincia di Pavia provides wonderful architectural and scenic backdrops for their flights, something captured briefly in a video they filmed last year for Skype and Microsoft.  To Eric’s surprise, the commercial was finally released this month.

The Raymonds and their collaborators are part of a larger advertising campaign for Skype and Microsoft, with their high-tech offerings complementing the wireless communications tools and the ad’s graphics.

Eric and Irena, John Lynch, and Jason Rohr perform well for the cameras, but Eric had an extra challenge in the aerial filming.  “I was flying in formation with a Phantom drone!”

Microsoft also featured the team in a tutorial showing how to set up Skype meetings.

Eric explained that, “John Lynch is one of my CAD designers, and master machinist.  He made my nose gear, and is a specialist for propeller molds.

“Jason Rohr is an expert render artist and animator, and another important member of our team,“ who is ”busy with other work also.”

With an authoritative British voice-over, expert filming, and editing, Solar Flight gets a significant media boost.  Congratulations to all.

Meanwhile, Back at the Symposium

As noted in the video, Eric has been advancing solar aviation since 1986, making an historic flight across the US in 1990.  At the First Annual Sustainable Aviation Symposium in May, he showed his latest offerings, including a high-altitude, long endurance (HALE) machine which apparently was an early design he proposed for Solar Impulse, but is now re purposed for optionally-piloted operation.

Eric’s craft so far have been truly homebuilts, relying on hand-made components and requiring a highly-skilled work force (Eric, Irena and friends). 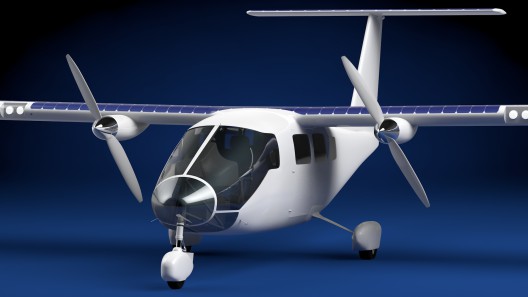 His six-seat Transporter, a sun-powered Partenavia Observer lookalike intended for remote areas where normal aircraft support systems don’t exist, could take six passengers on quiet tours of scenic areas, or bring needed supplies to otherwise unreachable destinations.  An optional gas-powered range extender on board (not unlike the BMW i3) longer trips could augment the solar wings and tail.