John McClintock, co-founder of eUP Aviation in Lumby, British Columbia, recently spoke with your editor on changes he and Randy Rauck are making to their Electravia-powered hang-glider trike.  They’ve recently campaigned Green1 up and down the Pacific Coast, demonstrating its self-launching and soaring capabilities over California deserts, at Torrey Pines, and in the mountains of Oregon.

John was pleased to report that the trike came through that 7,700 kilometer (4,774 mile) bouncing trailer torture test with a perfect bill of health for the e-drive system and its installation.

Not content to just enjoy their flights (which they did) the entrepreneur-engineers kept careful records of the details of each flight using an on-board Flytec 5030 hang gliding instrument to collect flying data, and their custom-specified Electravia data display and recording option to capture information for the e-drive system.  eUP Aviation Inc. have expanded the raw data into a Digital Journey Log, which will allow customers to demonstrate the care and use that their complete system has both delivered and experienced.

They’ve also worked on mechanical enhancements that suit their style of flying.  The Electravia power system for which they are North American distributors, for instance, comes with a slide potentiometer, much like the slide rheostat used to dim dining-room chandeliers.  As John notes, “With a powered hang glider, the pilot needs both hands on the control bar during take-off, so a mechanical system from foot throttle to potentiometer (complete with auto-return spring to zero for aborting take-off) had to be developed.”

eUP have gone through a few variations of mechanical to electronic conversion devices, and have now successfully flown with a robust, commercially available unit often seen in light industrial electric vehicles.

Another improvement showing good results is the addition of a mechanical propeller brake. Eliminating propeller windmilling during soaring flight will improve glide performance, and minimize the reversing current demands that will be sensed by the control system.

Randy and John are keeping focused on being prepared for operations in the warmer ambient air of summer. Climb power settings can lead to high brush holder temperatures. The pilot display includes the real-time temperature of the brush holder, with color transitions progressing into flashing warning modes to assist the pilot in monitoring the system.

John points out, “This is the governing parameter for flight thus far; we were limited in altitude gain in Arizona due to heat at the brush holder. We were very conservative in keeping to 60°C whereas the manufacturer specifies 10 minutes max at 70°C (apparently failure will occur shortly beyond 90°C.)”

Despite its open appearance, the motor sits “in a relative vacuum, with the prop stealing all the airflow,” according to John.  eUP have fabricated a composite ducting attachment that provides an inlet, chamber and exhaust air corridor, based on ram air with an optional blower for warmer ambient conditions. Initial blower testing has been promising, and the eUP Digital Journey Log will be used to collect and analyze the data from the flight test program to help define the operating ranges for the ram air and forced air cooling systems.  They look forward to being able to fly in warmer, more thermal-prone weather with cooler brushes and greater assurance.

John explains that e-flight requires different flight planning and energy management.  “The equation is simple: you want lots (of climb) now, you pay the price with less time.  Our operations manual will get into this topic, and [include] predicted temperature limits given the ambient temperature at launch. The manual will rely on data collected over the next several months and should allow realistic assessments of flight parameters. 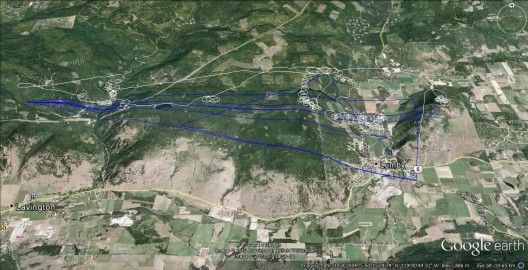 All the data collected from Green1’s GPS, flight and motor data can be collected into a coherent, 3D record of each flight

Overall, the careful collection of data helps to even create Google Earth overlays of flights, allowing the review of mechanical, aerodynamic, and probably even pilot performance.  The era of alibi-free flight is upon us.

John explains that he has, “Wanted to create a Digital Journey Log for the battery and motor data, and flight information can also be captured.”  Such information can be valuable in predicting how much energy capacity is left in the batteries, for instance.

eUP uses a count-down timer, showing remaining energy in terms of powered flight time still available.   Others displayed the energy that had been “spent,” but that approach required some math on the part of the pilot (and might lead to some erroneous conclusions). 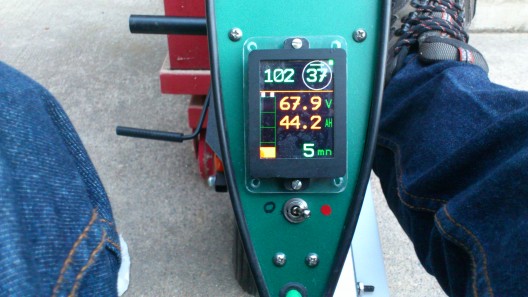 In the photo taken at Torrey Pines, read from the top left and go clock-wise.  We see 102 amps just before the motor connection; 37°C motor temperature at the brush holder; a green square indicating the SD card is functional and recognized by the system; 67.9 volts, measured at the battery; 44.2 Ah consumed; 5 minutes remaining if the throttle remains at the present setting with a 102 Amp current draw.  The yellow bar on the left side of the screen visually represents the “gas tank.”

John likes the fact that his instrument works for the pilot, “And as a back-up the pilot knows their battery capacity (52 Ah for Green1) at full charge and that can be compared against the Ah consumed reading, for a different measure of remaining capacity.”

Electravia offers an upgrade option that presents flight parameters on the same display, so a flyer could see vertical speed, altitude and other useful information.  Our Canadian friends anticipate that Anne Lavrand will add a GPS function for true one-stop flight information shopping.

As more pilots and groups accumulate information from their flights, we will gain valuable data to assess aircraft performance and predict flight durations more accurately.  Thanks to John and Randy for their approach to creating what will be a usable and useful pilot’s manual for their craft.