We’re used to seeing motorgliders which pop an engine or motor up on a tall stalk behind the cockpit, then retract it into the slim tailboom for minimum drag.  Why not do the same with two electric motors on each side of the airplane, tucking them in a slender fuselage for soaring?

Emails with Eurosport’s Tom Leite and perusal of the Portuguese firm’s web site and on-line brochure verified that almost everything on the Crossover motorglider is electric and retractable.

Tom notes, for instance, “Our motor/props fold into the fuselage: [they are] 3-phase PMSM motors up to 40Kw at takeoff each.”  In the video, see the long, spar web-like structure with lightening holes that separates the two motors as they slide into and out of the fuselage.

“Our wing span is set from 9.6 to 15 meters and is electrically operated.”  Tom refers to the special version that will have extendable and retractable wings, with tip segments sliding out from the 9.6 meter center section to their standard-class sailplane full span.  This has been a dream of sailplane pilots for years, discussed in Soaring magazine even 30 years ago.

Otherwise, the airplane can be flown with fixed short or long spans depending on the chosen “mission” for the day.

Crossover has other electrically-operated functions, including dual Fowler flaps, landing gear, and even the large canopy that opens to permit access to the low slung seats.

That seating was tried by one and all at the airplane’s recent showing at Friedrichshafen, including many in wheel chairs.  Considering that many light aircraft involve difficult access for even able people, this would be a big selling point.

The airplane’s flexibility is furthered by the multiple ways in which it can mount varied powerplants.  Tom says.  “We use twin Slovenian [motors with] 40 kilowatts take off power each (same as the Pipistrel Taurus).”  The anticipated six meter per second (1,182 feet per minute) climb should allow flying from small fields.

Its empty weight with no batteries fits well into Light Sport Aircraft standards in America and ULM criteria in Europe.  Standard batteries add 60 kilograms (132 pounds) and provide 9 kilowatt hours of energy.  Each of four battery packs has an included battery management system (BMS) and allow up to 60 minutes of powered flight.  In the range extender version, batteries will add only 15 kg. and provide 2.25 Kwh.  The range extender adds 45 kg. (90 pounds). 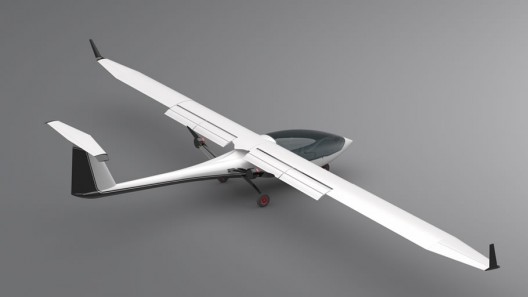 Tom adds details on standard and hybrid operation. “Our Project designed MTOW is 600 kg., which means we could be at max. with 180 kg. of batteries for up to 3 hours powered flight.  [In the hybrid version], battery C rating is much higher, as we use it for takeoff and then recharge it again in flight. And when recharged, it can stay in powered flight without the range extender for 15 to 20 minutes, safe enough to find a safer landing.

“At Aero we had congratulations from Professor Rudolf Voit-Nitschmann and many others including Ivo Boscarol: it was a super show for our first presentation.”

The fuselage to wing junction is almost unique, mirroring Akaflieg Munich’s MU-31 standard-class sailplane.  The semi-pylon mounting is intended to reduce interference drag that otherwise detracts from ultimate gliding performance.  This gives the Crossover a distinctive tadpole-like “look” that adds to its slender appearance.

Eurosport’s brochure lists myriad electronic delights, but as a final note for gadget freaks: “By the way, we use our own Bluetooth/wireless Android App for monitoring the power system.”  Doubtless, many prospective buyers will want to pop the canopy with their own wireless tricks.