Researchers at the U.S. Naval Research Laboratory flew their fuel cell powered Ion Tiger UAV for 48 hours and 1 minute on April 16-18 by using liquid hydrogen fuel in a new, NRL-developed, cryogenic fuel storage tank and delivery system. This flight shatters their previous record of 26 hours and 2 minutes set in 2012 using the same vehicle, but with gaseous hydrogen stored at 5000 psi.  The airplane had flown 23 hours, 17 minutes in 2009.

The 550 Watt (0.75 horsepower) fuel cell onboard the Ion Tiger has about four times the efficiency of a comparable internal combustion engine and the system provides seven times the energy in the equivalent weight of batteries.  The Ion Tiger weighs approximately 37 pounds and carries a 4- to 5-pound payload.” 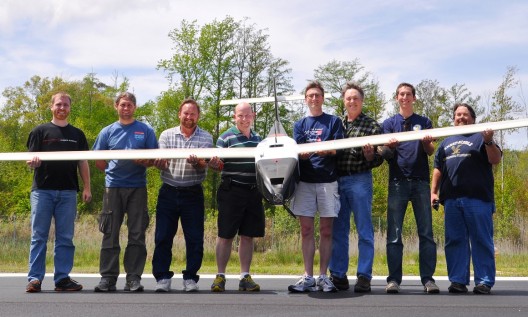 Gerard Thevenot, who flew the English Channel on a hydrogen-powered “trike” in 2009, used about 550 grams per flight hour, with the craft’s 5-liter tank allowing about one hour flying time. His powered hang glider was probably over 10 times the weight of the Navy research UAV.   The Ion Tiger’s lighter weight and 0.75 horsepower output use much less fuel per hour, helping set endurance records.

Thevenot and the previous Ion Tiger systems used compressed, but still gaseous hydrogen: the latest iteration’s liquid H2 is three times denser than the 5,000-pounds-per-square-inch compressed gas.  This cryogenic fuel is carried in a high quality, insulated Dewar flask and its boil off matched to the vehicle fuel cell’s fuel consumption.

With hydrogen fuel stations probably in short supply in a war zone, “NRL proposes in-situ manufacture of LH2 for use as fuel. An electrolyzer-based system would require only water for feedstock, and electricity, possibly from solar or wind, to electrolyze, compress, and refrigerate the fuel.”  In combat, on a cost-is-no-object basis, sophisticated, expensive systems are acceptable: civilian use might require tighter cost/benefit analysis.

Such operations will still require plenty of clean energy to squeeze the gaseous hydrogen and cool it to less than 423.2 degrees F, at which point H2 becomes a liquid and settles on the bottom of the container.  This container “must be able to both hold pressure as well as be insulated enough to keep the hydrogen at the correct temperature.”  Even an effective Dewar loses about one percent per day, so rapid deployment is advisable.

Flowing from the Dewar to the proton exchange membrane (PEM) fuel cells used on the Tiger, the liquid vaporizes, combines with atmospheric oxygen and generates electricity to power the model airplane motor that provides thrust for the Ion Tiger’s flight.

According to Protonex, makers of the system, “The core of a fuel cell system is the fuel cell stack, which is created by stacking bipolar plates (with reactant flow fields) next to membrane electrode assemblies that consist of an electrolyte (membrane) and two catalyst-coated, porous electrodes (anode and cathode). Fuel cell systems also contain a number of pumps, valves, electronics and other specialty components (balance of plant) that make up the rest of the system, including fuel supply, cooling and power management.

“In the fuel cell system, hydrogen is fed to the anode side of the fuel cell stack where a platinum catalyst separates the hyrdogen’s negatively charged electrons from positively charged ions (protons). The protons then move through the membrane to the cathode and combine with oxygen from the air and electrons, to produce water and heat. The electrons from the anode side cannot pass through the membrane and as a result are forced around the membrane through an external electrical load before returning to the cathode side of the cell. The resultant flow of electrons is a useful electrical current.”

The NRL LH2 flight capability is being developed by NRL’s Tactical Electronic Warfare and Chemistry Divisions, and is sponsored by the Office of Naval Research.

Protonex makes a commercially-available version of its Ion Tiger fuel cell, as well as others in PEM and SOFC (solid oxide fuel cell) technologies.