Osaka University researchers have created a new material based on gold and black phosphorus to produce clean hydrogen fuel using the full spectrum of sunlight.  Most solar apparatus used in “water splitting” rely on materials such as titanium dioxide.  These are limited to obtaining energy from the ultraviolet (UV) part of the solar spectrum, however.  The rest of the spectrum is wasted.

Osaka’s team “developed a material to harvest a broader spectrum of sunlight,” using a three-part composite.  The different parts maximize absorption of light and enhance the efficiency of the unit for water splitting.  The core, a “traditional” semiconductor of lanthanum titanium oxide (LTO) is coated with tiny nanoparticle specks of gold.  The gold-covered LTO is then mixed with ultrathin sheets of black phosphorus (BP), which acts as a light absorber. 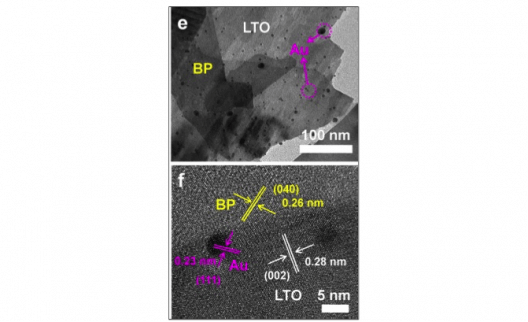 Bonding the gold-coated LTO to the BP layer makes a serendipitous combination.  Team leader Tetsuro Majima says. “BP is a wonderful material for solar applications because we can tune the frequency of light just by varying its thickness, from ultrathin to bulk. This allows our new material to absorb visible and even near-infrared light, which we could never achieve with LTO alone.”

The report continues, “By absorbing this broad sweep of energy, BP is stimulated to release electrons, which are then conducted to the gold nanoparticles coating the LTO. Gold nanoparticles also absorb visible light, causing some of its own electrons to be jolted out. The free electrons in both BP and gold nanoparticles are then transferred into the LTO semiconductor, where they act as an electric current for water splitting.”

Absorbing a broader spectrum of light and conducting electrons more efficiently, the “unique interface” between BP and LTO results in a material 60 times more active than LTO along.

Majima says, “By efficiently harvesting solar energy to generate clean fuel, this material could help to clean up the environment.  Moreover, we hope our study of the mechanism will spur new advances in photocatalyst technology.”

The abstract for their paper can be found on the web site for the Angewandte Chemie International Edition, 2017.
Abstract: Efficient utilization of solar energy is a high-priority target and the search for suitable materials as photocatalysts that not only can harvest the broad wavelength of solar light, from UV to near-infrared (NIR) region, but also can achieve high and efficient solar-to-hydrogen conversion is one of the most challenging missions.Herein, using Au/La2Ti2O7 (BP-Au/LTO) sensitized with black phosphorus (BP), a broadband solar response photocatalyst was designed and used as efficient photocatalyst for H2 production. The optimum H2 production rates of BP-Au/LTO were about 0.74 and 0.30 mmol g@1h@1 at wavelengths longer than 420 nm and 780 nm, respectively. The broad absorption of BP and plasmonic Au contribute to the enhanced photocatalytic activity in the visible and NIR light regions.Time-resolved diffuse reflectance spectroscopy revealed efficient interfacial electron transfer from excited BP and Au to LTO.  which is in accordance with the observed high photoactivities.

Their findings would seem to have implications for all solar collectors, with greater efficiency possible for solar cells.