Dr. Seeley shared this item from Science Daily, regarding the potential use for this new material in the solar highways reported here.  One critique of that design is the need to maintain structural integrity with semi-trucks passing over a layer of glass through which everything from lane markers to warning messages could be displayed. 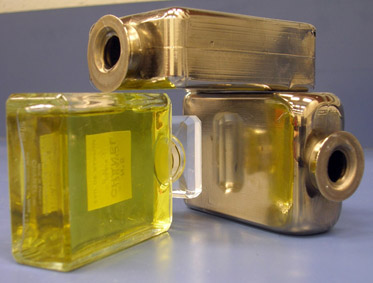 Jan Schroers, a materials scientist at Yale University, is experimenting with a new class of materials called bulk metallic glasses (BMG), or metal allows with randomly arranged atoms.  “Normal” metals have more well-ordered crystalline structures, but the random atoms of BMGs, “Can be molded into complex shapes with the same ease and low expense as plastic but without sacrificing the strength and durability of metal,” according to Science Daily’s February 28, 2011 report.

The report quotes Schroers, “’These alloys look like ordinary metal but can be blow molded just as cheaply and as easily as plastic,’ Schroers said. So far the team has created a number of complex shapes-including seamless metallic bottles, watch cases, miniature resonators and biomedical implants-that can be molded in less than a minute and are twice as strong as typical steel.”

With materials costs equaling high-strength steel, but with processing as inexpensive as plasics manufacturing, the alloys can be made of metals such as ziThe materials cost about the same as high-end steel, Schroers said, but can be processed as cheaply as plastic. The alloys are made up of different metals, including zirconium, nickel, titanium and copper.

Schroers’ team used low-temperature, low-pressure blow molding to form the BMGs, and “the bulk metallic glass softens dramatically and flows as easily as plastic but without crystallizing like regular metal. It’s the low temperatures and low pressures that allowed the team to shape the BMGs with unprecedented ease, versatility and precision, Schroers said.”  Materials can be shaped in fluids or a vacuum to maintain ideal temperatures.

Schroers further explained, “Blow molding completely eliminates friction, allowing us to create any number of complicated shapes, down to the nanoscale.”

The team has made miniature resonators for microelectromechanical systems (MEMS) and gyroscopes using BMG.

Science Daily lists other advantages of the new process.  “In addition, by blow molding the BMGs, the team was able to combine three separate steps in traditional metal processing (shaping, joining and finishing) into one, allowing them to carry out previously cumbersome, time- and energy-intensive processing in less than a minute.”

Schroers hopes the ease, economy and precision of blow molding will have the “potential to impact society just as much as the development of synthetic plastics and their associated processing methods have in the last century.”

The team’s findings are described online in the current issue of the journal Materials Today.  Other authors of the paper include Thomas M. Hodges and Golden Kumar (Yale University); Hari Raman and A.J. Barnes (SuperformUSA); and Quoc Pham and Theodore A. Waniuk (Liquidmetal Technologies).

EADS, the European aerospace and defence group, hopes its Additive Layer Manufacturing (ALM) process will also revolutionize manufacturing.  It’s fitting that the airspace giant (over $40 billion in revenues last year) has used this process to make a space-age bicycle, a neat turnaround on the creation of the first controllable, powered airplane by a pair of Dayton, Ohio bicycle mechanics.

EADS’ press release explains.  “Known as the ‘Airbike’ [named after the Airbus line which EADS also manufactures], it is a bike with a difference. Made of nylon but strong enough to replace steel or aluminum, it requires no conventional maintenance or assembly. It is ‘grown’ from powder, allowing complete sections to be built as one piece; the wheels, bearings and axle being incorporated within the ‘growing’ process and built at the same time. The Airbike can be built to rider specification so requires no adjustment.” 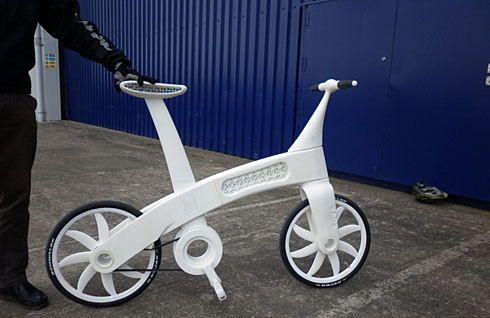 ALM “allows single products to be grown from a fine powder of metal (such as titanium, stainless steel or aluminium), nylon or carbon-reinforced plastics from a centre located next to Airbus’ site at Filton. Similar in concept to 3D printing, the bike design is perfected using computer-aided design and then constructed by using a powerful laser-sintering process which adds successive, thin layers of the chosen structural material until a solid, fully-formed bike emerges.”

EADS is looking beyond the Airbike, and has, “Developed the technology to the extent that it can manipulate metals, nylon, and carbon-reinforced plastics at a molecular level which allows it to be applied to high-stress, safety critical aviation uses.”  This echoes the atomic-level manipulation that Yale’s BMG processes use.

ALM parts are up to 65-percent lighted than traditional, machined parts and show equal strength.  EADS is interested in that, since the firm notes that every one kilogram in weight reduction saves an airline about $3,500 in fuel over an aircraft’s lifespan, and reduces carbon dioxide emissions proportionally.

ALM uses about one-tenth the material of traditional methods.  Parts could be manufactured on site using “printers” without the need for large factories.  Replacement parts could be crafted as they are needed, where they are needed, with the potential to even supply humanitarian or military applications.  Items once associated with centralized plants could be made with “cottage industry.”

EADS quotes Andy Hawkins, lead engineer for ALM at EADS. “The possibilities with ALM are huge – it’s a game-changing technology. The beauty is that complex designs do not cost any extra to produce. The laser can draw any shape you like and many unique design features have been incorporated into the Airbike such as the auxetic structure to provide saddle cushioning or the integrated bearings encased within the hubs.”

Luckily, EADS explains auxetic.  “Auxetic shapes or materials appear to defy the laws of physics. If you squeeze, the entire structure compresses (instead of getting thicker), if you pull, the entire structure gets bigger (as opposed to getting thinner). These structures have mechanical properties such as high energy absorption and fracture resistance and can be used in applications as far-ranging as building structures or body armor.”

Imagine a future in which a craftsman takes your measurements, much as technicians measured astronauts for their custom couches in space capsules, or a fitter defines your custom bike.  An airplane, based on the designer’s CAD drawings and custom-fitted to you and your favorite passenger, emerges from a large scale printer.  Perhaps the non-conductive parts of its electric motor will be layered from these materials.  Better yet, imagine flying your unique airplane from a solar-powered glass runway made from BMGs.  That’s a dazzling future.