Graphene, applied in a sodium-ion battery may herald inexpensive alternatives to lithium-ion cells.  Scientists are exploring ways of making batteries not only more energy-dense, but also less costly.  Sodium, a primary ingredient in table salt, is one possibility.  It’s also abundant without too much effort required to find it. On the other hand, easily-obtainable lithium may become in short supply at a time when the world is clawing its way into the earth searching for more.

Sodium is the sixth most abundant element on earth, making up about 2.6 percent of the planet.   It’s never found free in nature, but always as part of something like the salt (NaCl) one can see it crusting over from evaporating bay water near Moffett Field, California, or in the Great Salt Lake in Utah. 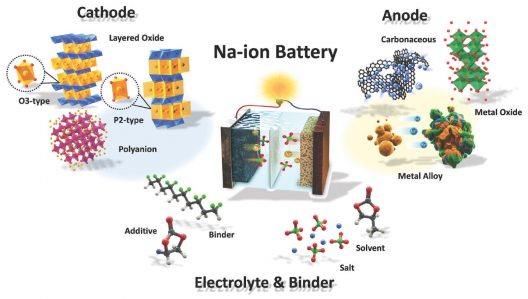 Janus sodium-ion battery has many unique elements, but importantly, graphene as part of the anode

Remember that graphene is merely a single atomic layer of graphite, discovered by Russians who became Nobel Prize winners for their work.  They peeled those single layers from pencil lead with the equivalent of Scotch tape.  Graphite, then, is stacked layers of graphene.

Because sodium ions are larger than lithium ions, they don’t store well within the graphite.  This limits such sodium-graphite battery’s storage capacity to about 35 milliamp-hours per gram, about a tenth of that for lithium-ion cells.

Researcher Jinhua Sun at the Department of Industrial and Materials Science at Chalmers explains, “We have added a molecule spacer on one side of the graphene layer. When the layers are stacked together, the molecule creates larger space between graphene sheets and provides an interaction point, which leads to a significantly higher capacity.”  The “spacer” apparently adds just enough room for the sodium ions to squeeze in and intercalate (insert themselves into) with the graphite.

This two-sided solution accounts for the school’s name for the project – Janus.  Janus was a Roman god with two faces – one of which might face the past and the other the future.  Janus was the god of beginnings and endings, and the god of doors which might lead to discoveries.

This nano-sized opening boosts the sodium-graphite cell’s energy level to 322 milliamp-hours per gram, near the energy density of average lithium-ion batteries.

Study author Professor Aleksandar Matic throws some hope our. “The research is still at an early stage, but the results are very promising. This shows that it’s possible to design graphene layers in an ordered structure that suits sodium-ions, making it comparable to graphite.” 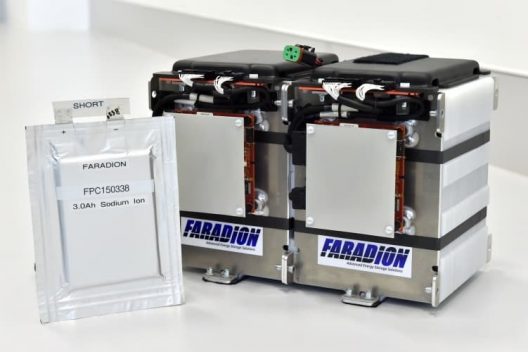 The paper’s abstract summarizes their work:

Sodium, in contrast to other metals, cannot intercalate in graphite, hindering the use of this cheap, abundant element in rechargeable batteries. Here, we report a nanometric graphite-like anode for Na+storage, formed by stacked graphene sheets functionalized only on one side, termed Janus graphene. The asymmetric functionalization allows reversible intercalation of Na+, as monitored by operando Raman spectroelectrochemistry and visualized by imaging ellipsometry. Our Janus graphene has uniform pore size, controllable functionalization density, and few edges; it can store Na+ differently from graphite and stacked graphene. Density functional theory calculations demonstrate that Na+ preferably rests close to -NH2 group forming synergic ionic bonds to graphene, making the interaction process energetically favorable. The estimated sodium storage up to C6.9Na is comparable to graphite for standard lithium ion batteries. Given such encouraging Na+ reversible intercalation behavior, our approach provides a way to design carbon-based materials for sodium ion batteries.

A Potential Pollyanish Upside to This

If things like sodium-ion batteries and other energy storage devices can use abundant, energy dense materials in applications where weight is not a concern, that will free lithium supplies for necessarily light duties.  This could be a win-win overall for future developments.

(Editor’s Note: Thanks to Howard Handelman for doing better proofreading than your editor manages.  He pointed out that water evaporates – salt does not.  The text has been changed to suit.)