$70,000 is a sizable base price for a car.   That sum for the simplest of Tesla S sedans makes a bigger than average debt load for most of us, probably more than most can responsibly assume.   Even the much anticipated model “E” at half that price is more stunning than the average sticker shock these days.  What if, by some act of art or science, that $70,000 could be slashed to $14,000 for an electric vehicle that could travel 265 miles on a charge?  That tall order is the order of the day for the Joint Center for Energy Storage Research, started two years ago under Dr. Steven Chu, who was then U. S. Secretary of Energy.  He and his “teams” were charged with establishing the cooperative enterprise at “Argonne National Laboratory with a budget of $120 million over five years to create a battery five times more powerful and five times cheaper than today’s norms – all within five years.”  We’re two years into the program – so how’s it going?

A lead article in The Seattle Times Monday morning removed any concern about progress, and the cooperative’s web site should alleviate any doubt that tax dollars are being spent wisely and well.

Not only would the price of EVs decline significantly if the group is successful, but the benefits would spill over into consumer products such as cellphones, laptops and the home-based “Internet of things.”

To pull of their ambitious goals, J-CESR’s researchers are delving into four lines of study: 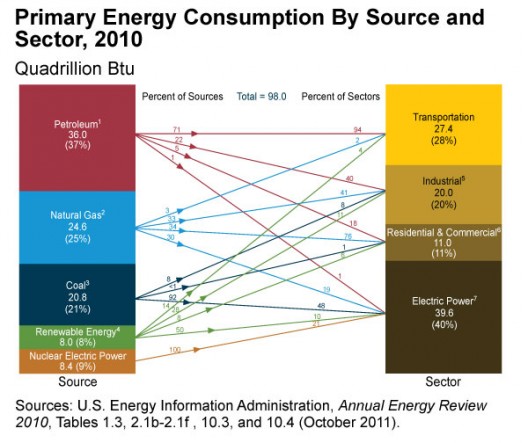 Big numbers from big sources. What J-CESR will have to achieve to bring 100% clean energy to just the US

Getting Their Actors Together

Now spread out among its 14 academic and commercial members, key players will come together in a new Berkeley Hub with a $54 million, 43,000 square foot General Purpose Laboratory, “bringing its battery scientists, chemists and engineers together under one roof for the first time.”

Center Deputy Director Venkat Srinivasan will head the team, which aims to “achieve revolutionary advances in battery performance — creating devices with up to five times the energy capacity of today’s batteries at one-fifth the cost by 2017” – the same aims expressed by Energy Secretary Chu five years ago.

Srinvivasan explains, “We want to go beyond and find the next generation of technology.  It’s clear to us that the batteries we have today are not meeting the needs.”

The Daily Californian reported Srinivasan’s remarks at the Center’s ribbon cutting.   “You put a bunch of scientists and engineers together and they start interacting, and you have products coming out of the other end,” Srinivasan said. “They have very different skill sets, and so very new products … are the result.

Elon Musk will soon compete, in a sense, not only against the Chevy Volt, BMW, Audi, Toyota and Nissan for primacy in the EV market, but will face researchers looking for the next big thing past lithium-ion batteries.  The efforts of J-CESR point toward post-lithium developments.  With others striving to perfect the delivery and distribution of hydrogen for vehicles, the market will soon provide choices that all lead to greener transportation. 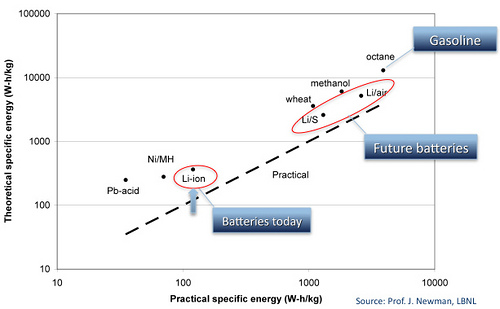 J-CESR reports, “George Crabtree, director of the project at Argonne National Laboratory near Chicago, said the federal government is pursuing the research to transform the two areas that consume two-thirds of all the energy generated in the United States — transportation and the energy grid.”

“’There’s a real opportunity for next-generation storage,’ Crabtree said. ‘You have to make a big step forward. Lithium-ion will not be able to make that step. … You need a big program and a group effort to make it happen.’”  He says researchers have narrowed things to about 100 chemistries, with a few in the prototype phase.

Berkeley’s battery research hub is next door to the Advanced Light Source building, where automaker Toyota has been researching magnesium-ion batteries, which promise double the charge of lithium at the same weight.  That kind of potential charges up Srinivasan. “For the same weight, you can have twice the charge — you’re doubling the amount of capacity.  That’s exciting.”

Sharing the lab will be principal investigator and Lawrence Berkeley staff scientist Brett Helms, focusing on the other charge for J-CESR, large-scale grid storage.  Doubtless, discoveries within each group will be shared and expanded on.