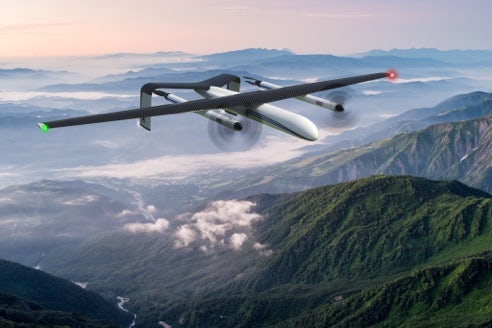 Wirth Research is now constructing a new tilt rotor, Vertical Take Off and Landing (VTOL), hydrogen fuel cell powered, advanced terrain-mapping drone.  Carrying a payload of sensors and onboard data processing capabilities, the vehicle will be powered by a complete H2 storage, control and power system provided by HES of Singapore, a specialist in ultra-light hydrogen fuel cells. 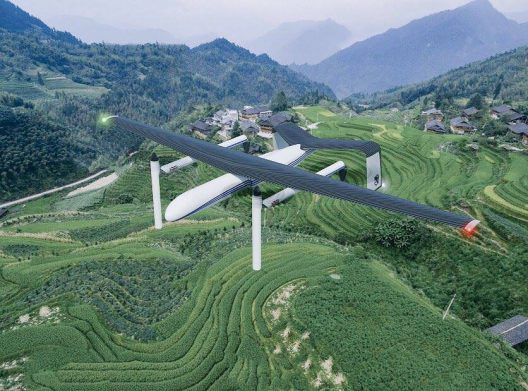 The Wirth machine’s missions range from precision agriculture, to pipeline and cable inspection for utilities, surveillance and other security-related tasks, through to detection and monitoring support for ordnance clearance operations.  Combining the ability to carry a large payload and provide up to six-hour endurance in the VTOL configuration meant shifting from battery to hydrogen power.

HES Founder and CEO, Taras Wankewycz, said, “We are shifting gears from a 200Wh/kg lithium battery capability to a 700Wh/kg fuel cell energy density capability, one that would radically change the applicability of drones, such as long-distance delivery, large area inspections at faster speed and lower cost, and a reduced need for expensive high altitude sensor payloads.”

The company explains, “This UAS system can be adapted to carry and power a variety of sensors including stereo high-resolution gimbaled optical cameras, high-resolution infra-red sensors, LIDAR imagers and ground penetrating radar sensors.  The ability to carry and power such an extensive range of payloads makes this UAS technology ideal for a variety of industry sectors with multiple applications beyond its primary task of terrain mapping.”

Wirth has a great deal of experience applying computational fluid dynamics and manufacturing capabilities to race car development, architecture, commercial vehicles and the general automotive industry.  This experience enables Wirth to expedite new creations, moving from Technology Readiness Level (TRL) 3 to TRL 6 in under six months on this project.

Researchers at the U.S. Naval Research Laboratory (NRL), Vehicle Research Section and Photovoltaic Section, building on the proven concept of autonomous cooperative soaring of unmanned aerial vehicles (UAVs).  The team investigates combining “autonomous soaring algorithms and solar photovoltaics for capturing energy from the environment to extend the endurance of an aircraft.” 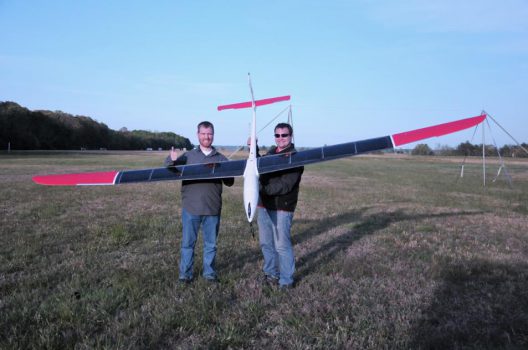 Dr. Dan Edwards, an aerospace engineer, explains, “NRL has twice flown our solar UAV (based on the SBXC sailplane) over 10 hours using a combination of solar photovoltaics and autonomous soaring as part of the ‘solar-soaring’ research program.  This research is investigating the value of combining autonomous soaring algorithms and solar photovoltaics for capturing energy from the environment to extend flight endurance and mission operations of an aircraft.”

A custom-built, drop-in photovoltaic array replaces the wing’s original non-solar center section. A power management and distribution system converts the power from the solar arrays into direct current (DC) voltage, which the electric motor can use for propulsion, or to recharge a “smart battery.”

The autonomous soaring software algorithm commands the aircraft to orbit in any nearby updrafts, very similar to soaring birds. To test the solar-only performance, the algorithm was disabled for the two solar flights.  The motor switches off automatically if thermals or upward wind gusts increase the airplane’s altitude along the pre-defined flight path, allowing “passive soaring.”

According to NavalToday.com, “The UAV equipped with solar wings incorporated PV (photo-voltaic) arrays from Alta Devices, Inc. It flew for 11 hours, 2 minutes on April 19, 2017. Takeoff occurred at 7:46 a.m., approximately an hour after sunrise, with the battery’s state of charge at 90 percent. Landing occurred at 6:48 p.m., approximately an hour before sunset, with the battery’s state of charge at 26 percent. Thermal activity was very weak and almost all of the flight was spent running the motor. Near solar noon, the solar array provided sufficient power to cruise on solar power alone.”

Edwards noted, “The experiments confirm significant endurance gains are possible by leveraging thermal updrafts and incident solar radiation, rather than ignoring these free sources of energy.  Future testing will focus on quantifying the trade space between improvements in solar cell efficiency and combining with autonomous soaring for improved solar-recharging.”

As background, the Navy has set some endurance records with drones before, flying a hydrogen fuel-cell-powered Ion Tiger in 2013 for over 48 hours.  Alan Cocconi flew “So Long” for 48 hours in 2008, the first two-day, two-night solar-powered flight.   QuinetiQ’s Zephyr managed an 83 hour, 37 minute record in 2008.  The solar-cells fed batteries on the solar-powered machines to allow flying at night.

Such long-endurance flights have obvious military applications for gathering continuous information, surveillance, and reconnaissance (ISR).  Persistence can pay off in uninterrupted views of disaster areas, or searches for lost hikers, for instance.

Jennifer Chu reports from MIT that a large multi-discipline team has created a long-wing-span drone that can carry 10 to 20 pounds of communications equipment at 15,000 feet – for up to five days.  At an all-up weight “just under” 150 pounds, the UAV’s five-horsepower gasoline engine can keep it aloft for up to five days.  That’s “longer than any gasoline-powered autonomous aircraft has remained in flight,” according to the researchers.

John Hansman, the T. Wilson Professor of Aeronautics and Astronautics; and Warren Hoburg, the Boeing Assistant Professor of Aeronautics and Astronautics, led the Beaver Works team, students in a two- or three-semester course to design, build and test their designs. The U. S. Air Force approached this group to design a long-duration UAV powered by solar energy.

After long study and analysis, the MIT team decided to go with a more traditional power source.  Professor Hansman explains, “[A solar vehicle] would work fine in the summer season, but in winter, particularly if you’re far from the equator, nights are longer, and there’s not as much sunlight during the day. So you have to carry more batteries, which adds weight and makes the plane bigger.  For the mission of disaster relief, this could only respond to disasters that occur in summer, at low latitude. That just doesn’t work.”

Using GPkit, Professor Hosburg’s vehicle optimization software tool, the team was able to examine “around 200 constraints and physical models simultaneously.  Team members determined that solar wouldn’t work for long-duration flights just anywhere in the world, they performed the same modeling for a gasoline-powered machine.  Their findings showed such a plane could “stay in flight for more than five days, at altitudes of 15,000 feet, in up to 94th-percentile winds, at any latitude.” 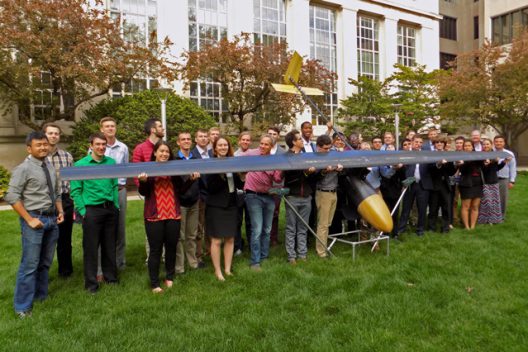 The team built a carbon-fiber, 24-foot wingspan realization in 2016, being careful to stay within the FAA’s 55-pound weight limit for drones.  It can be loaded with fuel and payloads to increase its weight to 150 pounds, though.   It’s also able to be dismantled and packed into a FedEx box and sent to disaster zones, presumably outside FAA jurisdiction.

Launched from a compact car, the prototype made a short flight proving its aerodynamic worth.

According to Hansman, “These vehicles could be used not only for disaster relief but also other missions, such as environmental monitoring. You might want to keep watch on wildfires or the outflow of a river.  I think it’s pretty clear that someone within a few years will manufacture a vehicle that will be a knockoff of this.”

This research was supported, in part, by MIT Lincoln Laboratory.

Research provides different configurations and different power systems to fulfill different missions.  With efficiency in mind, even the fossil-fuel powered versions can achieve long flights on the lowest use of resources.