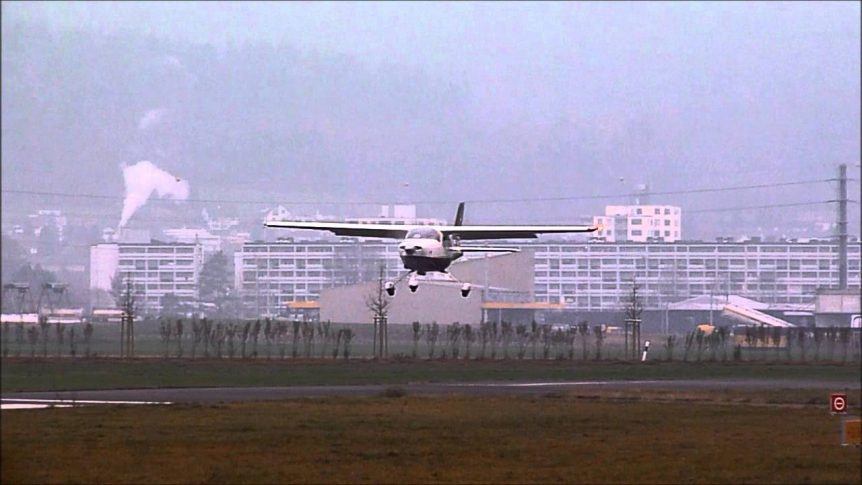 Urs Villiger, with the assistance of, “A network of aviation specialists…under the leadership of Calin Gologan CFD Consultants,” crafted a sleek four-seater, the Traveler TR230.  That airplane, originally flown with an internal combustion engine, has apparently been recrafted as a hybrid craft.  Gologan, along with Dr. Volker Kassera, did the majority of the aircraft’s design.

First flown on December 4, 2015, the gas-powered Traveler was very much a fixed landing gear airplane, replete with wheel pants.  The large canister under the cowling and forward part of the fuselage is a so-called “Swiss muffler,” a great deal like a “glass-pack” used by American hot-rodders in the 1950’s.  It was developed by experimenters in Switzerland to comply with noise regulations.  The major background noise heard in the video is from a Diamond motorglider powered by a Rotax engine – indicating the effectiveness of the Swiss muffler. 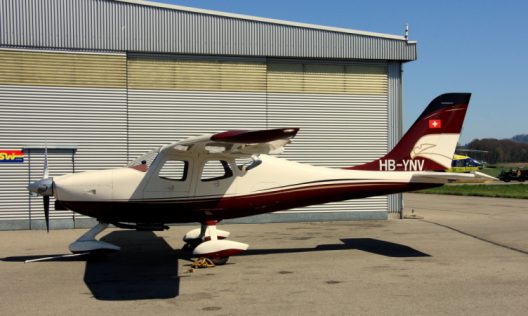 TR230 Traveler was initially made as an internal-combustion powered plane

According to electric-flight.eu, the “former entrepreneur and Hobbypilot is now devoting his entire leisure time to the development and construction of his future electric aircraft.”  He showed a large scale model at AERO 2017 and hopes to “present” the full-scale aircraft in 2018.

Originating with the Traveler TR230, developed by MSW Aviation with a “Kolbus engine,” according to electric-flight, it’s unclear if the new hybrid is a rebuild of the existing airframe or a completely new machine.  Regardless, the wheels are tucked inside and the configuration has a more streamlined nose, probably reserved for batteries to make up for the loss of the engine.

The TR 230’s lines are there, but a 220-kilowatt electric drive unit similar to the one mounted on the Votec Evolaris sets high on the vertical tail.  The drive weighs only 45 kilograms (99 pounds), still requiring a significant structure to hold it in place.  A speed reducer will turn a Mühlbauer five-blade propeller at a reasonable rate.  Makers say 400 kilograms (880 pounds) of batteries “should at least be sufficient for short domestic flights.”  Developers plan a future hybrid version with longer range. 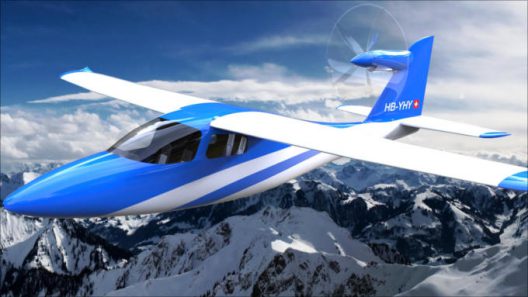 A poster advertising Evolaris’ display at Aero shows both the Traveler Hybrid and the Votec Evolaris aerobatic plane, and includes a line for the EVO 230 kilowatt motor, for aircraft with takeoff weights up to two tons.  Evolaris is a spin-off from Berne University of Applied Sciences, and the two young mechanical engineers have worked two years on the development of their own electric drive systems, featured on both the aerobatic and hybrid craft. MSW supervised building the aircraft.

Partners include Brusa Elektronik AG, a maker of high-performance electric motors; Suter Racing AG, supporting the project in gear manufacturing, mechanical engineering and cooling technology; MT Propellers, noteworthy for its 90-percent market share in Europe and 30-percent share in America; Serto AG, specializing in cooling technology; and EAS, Experimental Aviation of Switzerland, helping people build and fly their own private airplanes.  Interestingly, the 530 member organization who are allowed supervision of the construction and maintenance of self-propelled aircraft, entrusted to them by the Federal Office of Civil Aviation (FOCA).

With a team showing such dedication and expertise, the Traveler Hybrid should be a significant milestone in Swiss and electric aircraft development.