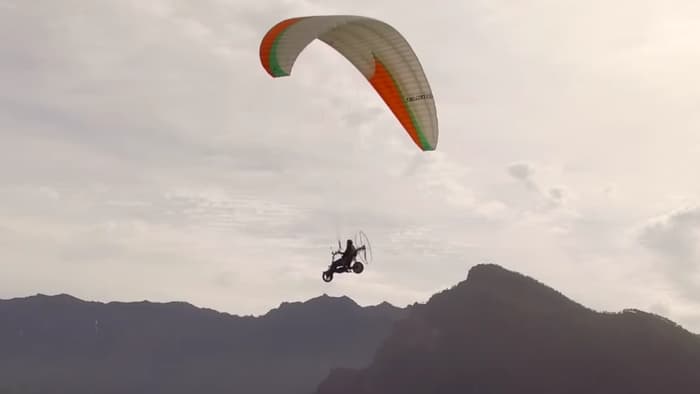 Thomas Senkel has gained fame for flying an unlikely-looking multiple rotor helicopter with a Pilates exercise ball landing gear and helping drive through that design to a far more refined Volocopter VC200, which we reported has just become the first certified electric helicopter in Germany

Knowing how to get the most out of very little, Senkel skipped the usual “crow-hops” performed by experimental test pilots and instead took a 46-minute ride over La Palma in the Canary Islands with his electric scooter/paraglider combination.  The six kilowatt (eight horsepower) hub motor took him up a long hill to the high launch point and the 13.5 kW (18 hp) FlyTech motor launched him into the air for a long flight to the beach below.  In either mode, the vehicles uses little energy, doesn’t pollute, and is quiet enough to be allowed in areas where noisy engines would not be permitted. 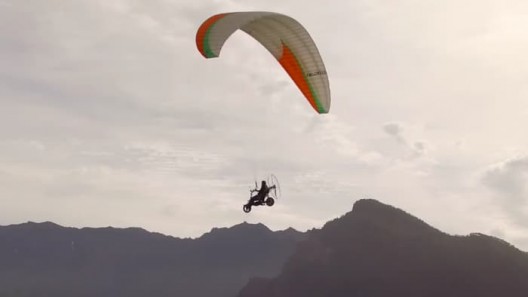 Missing only ET in a handle-bar basket, Thomas Senkel makes like a bird above La Palma for a 46-minute first flight

The first prototype of a flyable electric scooter, Skyrider One is a simple alternative to so-called flying cars, which usually require complex wing folding or storage mechanisms to allow driving on public roads.  A Skyrider pilot would simply unfurl his or her parasail and attach it to the scooter’s structure.  Notice in the video that Thomas doesn’t start the propeller until the sail has lifted above the scooter.

If Senkel can find partners to build and market multiple Skyriders, he will replace the somewhat ungainly ring surrounding the 130 centimeter (51-inch) propeller, which in turn will fold to allow scooter-like maneuvering (and parking), with other improvements to follow.

Judging from his expressions during the flight, there was some anxiety about the test.  Gizmag reports, “Flying prototype aircraft – especially hybrid designs like this one – must be a nerve-wracking experience. Indeed, as Senkel told us, ‘I was very nervous in the beginning and at the landing. I have some experience with powered paragliders,’ said Senkel, ‘but the behavior of the Skyrider One was unknown. After landing, I was relieved that everything went really fine. The next flight would be a lot easier.’” 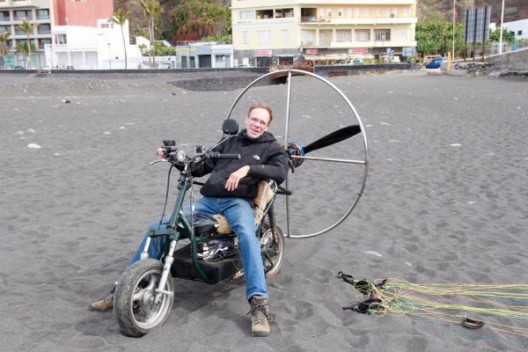 Notes with the video claim that takeoffs and landings are easy “with some help of your feet,” and that thermaling with flights of several hours is possible.  For the claimed 30 minute endurance in the air, a 46-minute flight shows rising air, or greatly reduced power during the long descent to the beach helped extend the flight.  The two 52-Volt, three-kilowatt-hour battery packs can be recharged in three hours, and provide the half-hour of flight or a 60 kilometer (37.2 mile) drive, with a top speed of 60 kilometers per hour (37.2 mph), although probably shorter range at higher speeds.  Those wishing to use a lighter single pack will halve those figures.

Because Skyrider One, motor, batteries and all, weighs only 108 kilograms (238 pounds), it meets even American ultralight criteria.

Gizmag further explains, “Skyrider One can take off on any flat terrain or airstrip. The rider needs to face into a slight headwind; crosswinds aren’t suitable. Once in the air, it’s possible to switch the motor off altogether and ride thermals to keep yourself aloft for potentially hours at a time without draining the battery.”