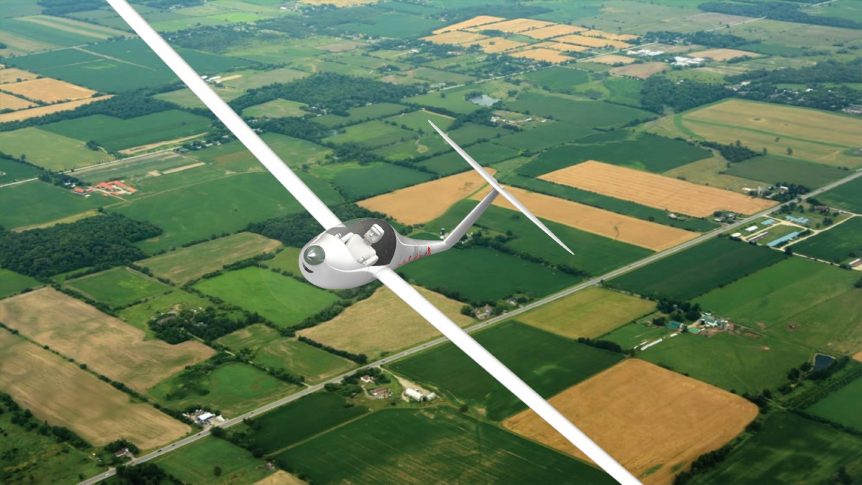 “The Quest for a Truly Practical Electric Touring Motor-Glider”

Mike Friend is not your typical retired aircraft executive.  As Technical Director for Boeing, he oversaw “the first manned fixed wing aircraft powered by a hydrogen fuel cell/lithium ion battery powerplant that first flew back in 2008.”  He’s been associated with green energy projects since then, including work on the Boeing-supported Zunum project, a set of 10- to 50-passenger electric hybrid airliners.  On the personal front, he hopes to design and build the Spark Solo, a single-seat electric motorglider that will enable cross-country flights from his home base of Bremerton (Washington) Regional Airport. 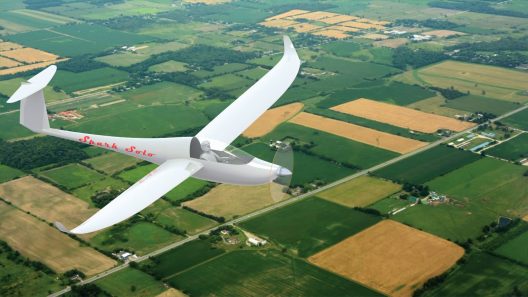 Motorgliders make a good combination with battery power.  Their clean lines enable using low power at cruise, and as this video from Gabriel DeVault shows, even a respectable takeoff and climb with power limited to 25 kilowatts (33.5 horsepower) in this instance.

Normally, DeVault’s Sonex would make full use of its Zero Motorcycle motor’s full 52 kilowatts (69.7 horsepower), but this self-limited output puts into perspective the importance a long wingspan’s low span loading.  Being able to fly safely in “econo-mode” would allow longer flights by limiting the battery drain during takeoff. 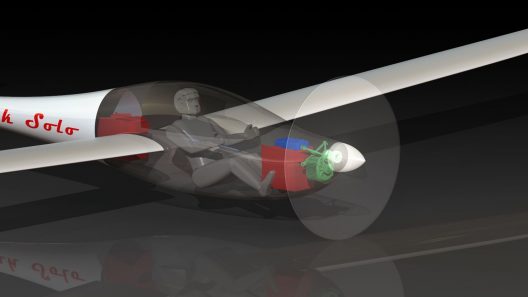 Mike was lucky enough to meet Gabriel on one of his outings, and that might have led to his choosing a Zero Motorcycle motor for his projected bird.  Financial considerations play a part, too, with Pipistrel’s 40 kilowatt package, batteries and all, totaling $27,000.  Wrecked Zero Motorcycles can be found for $9,000 or less, giving a prospective builder motor, controller, batteries and even cabling and instrumentation.  The only extra needed is a propeller speed reducer, a simple item designed by Mark Beirele for his Zero-powered eGull.

Mike is a self-admitted “fan” of “touring motor-gliders,” machines capable of self-launching and as implied – touring to distant places.  He particularly likes the Schleicher ASK-14, a German craft that used the wings and tail surfaces from the popular KA-6 sailplane.  It used a raspy little four-cylinder Hirth two-stroke engine, which thankfully went silent in soaring mode.  The engine didn’t have an electric starter, so the pilot had to yank on a pull-cord if he or she wanted to relight the motive power.  Two-strokes being what they are, the engine sometimes balked, and forced a landing.  That is what makes electric motors so ideal for self-launching sailplanes or touring motor gliders.  They rarely refuse to go when requested.

Mike has a set of requirements for the craft.  They start with having enough space inside to accommodate a 6-foot, 2-inch person like Mike.  It should allow single-person operation – enabling rigging and de-rigging, and all operations by the owner/operator alone.  One of the off-putting aspects of sailplane operation is the large crew required to assemble, launch and retrieve an airplane.  This would allow flights when the owner desired with no need to coordinate with others.

Practicality reigns in most respects for the Spark Solo.  It can be kept in a standard hangar and operated from a 1,500-foot grass strip.  It will meet FAA glider requirements for maximum weight/wing span squared of less than 3.0 Kg per meter squared, (0.62 pounds per foot squared).  Spark Solo will be registered as an FAA Experimental Amateur-built Glider – Self Launching.

The light wing and span loading will enable an initial rate of climb of at least 1,000 feet per minute, and the electric motor will produce quiet operation. 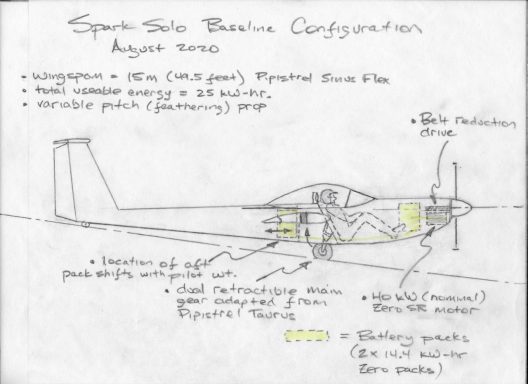 Mike is adamant that, “The appearance of the aircraft shall comply with the dictates of my hero, Italian aircraft designer Stelio Frati who is rumored to have said – ‘There is no use for an ugly aircraft when a few minutes of thought will produce a beautiful one.’”

Mike is using the wings and tail section from a Pipistrel Sinus Flex, but it would seem that many other standard-class size flight surfaces would work, although they would take different approaches for their assembly into a completed airframe.  Wings and Wheels has on-line classifieds for used gliders and parts.

Time and money are often conflated, and a small airplane can save time at a usually high cost.  Electric aviation may help with that equation, however.  The shortest car trip from Bremerton to Orcas Island, according to Google Maps, runs 118 miles on the most direct route and requires passage over one toll road and a ferry trip.  The fastest automotive passage runs 167 miles, runs north on I-5, and still has toll roads and a ferry trip.  Either takes about four hours.  On the Anacortes to Orcas Island ferry, fees run from $14.50 for a single adult to $34.50 for a compact car and driver and $44.50 for a vehicle under 22 feet and its driver. 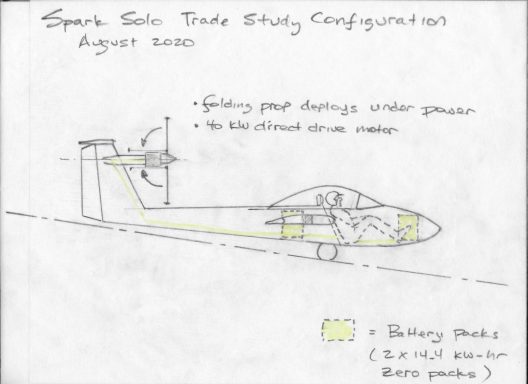 Considering an average of $3.00 per gallon for automotive gas, and an average of 25 miles per gallon, a car would use a little over $28 worth of gasoline for the shorter trip and just over $40 for the longer route.  It’s impossible to avoid a ferry trip to the island, for a another $69 for the round trip.  Even Mike’s Aeronca Champion, average 5 gallons an hour, would take about an hour to make the trip and a round trip would consume about $55 in avgas.  In the Spark Solo, with electricity costing about 9 cents per kilowatt hour in Washington (among the lowest rates in the world), the trip would cost around $3.14 for the round trip.

A more shocking comparison comes from looking at charter aircraft rates for the 73 mile trip from KPWT to KORS.  The trip for a single passenger in a chartered Cessna 172 is $1,264.  The price for “premium air charter” in a Cirrus SR22 climbs to $3,828!

See the chart below for Mike’s calculations based on energy usage for this clean single-seater.

Mike is currently working on articles about this promising aircraft.  For the time being, we can see that a well-designed motor-glider can promise grand adventures and reasonable operating costs.