One tenet of the CAFE Foundation’s outlook is that electric automobiles will be a major source of the new technology that will make electric aviation a practical reality.  Large-scale production numbers for cars mean lower prices, ubiquitous motors and batteries, and demonstrated performance.  Motorcycles offer another source for equipment that could see aircraft applications, since cycles share some of the same criteria for success, including light weight, compactness, and high output of both power and torque – especially true in the ultralight and light sport aircraft range.

The motorcycle community’s normally lukewarm assessment of the prospects for battery-powered two-wheelers is heated up considerably in the November issue of Motorcyclist, and that bodes well for electric aircraft.

Inside, the promises are fulfilled with no less than 29-1/2 of the magazine’s 98 pages filled with electric bike news, and an enthusiasm normally missing from such reports.  “E-Parity,” for instance, highlights a photo of Brammo founder Craig Bramscher with his new Empulse RR and the latest in sports bra technology, fluff normally associated with big iron.  The article keynotes several points in the overall coverage – electric bikes are catching up quickly on their fossil-fueled brethren’s performance and prices are becoming competitive.

Five pages on the Mission One superbike include the pull quote, “In the real world, there is literally nothing with sparkplugs and a license plate that will out-accelerate the Mission One off the mark,” red meat to enthusiasts and an indication of how much performance waits to be unlocked in green cycling.

An article on Walter Roehr’s electrified superbike, originally built around a Harley-Davidson V-Rod  engine, notes that sales of the original $39,995, 1,250SC plummeted, with “11 of 12 deposits cancelled in just two weeks” because of the “U. S. economic meltdown.”  Roehr saw an opportunity in electrifying the chassis, however, and now offers a single-motor 48-horsepower bike or a dual-motor 96-horsepower super e-bike.  (This configuration and power level are comparable to last year’s Cedric Lynch Isle of Man TT winner.)  Prices are considerably lower than the failed SC, and 200-pound-feet of torque will make wheelie popping an inevitable part of every trip.  Roehr notes that, “Now I’ve got dealers coming to me, and they’ve got customers lined up and waiting to see bikes.”

Even closer to last year’s TT winner, the Mavizen TTX02 has two of Lynch’s Agni motors, putting 82 horsepower to the pavement.  The bike’s 375 pounds guarantee brisk performance and the writer waxes, “If this truly is the future of superbikes, as I found myself thinking as the TTX02 accelerated effortlessly and near-silently past another string of slower cars, bring it on!”

Five pages examining the Motoczysz E1PC extol the promise for the future, including designer Michael Czysz’s comment on the 200 pounds of batteries that dominate the bike, and which equal a mere .3 of a gallon of gas.  “In my lifetime, computers went from the size of a house to the iPhone.  The same will happen with batteries, soon.”  Indeed, Czysz indicates that the next generation bike will lose 100 pounds of battery weight, making it equivalent in weight to a 600-cc sportbike. 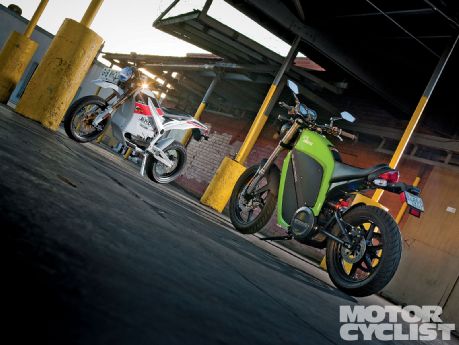 Other features include a seven-page comparison between the Brammo Enertia and the Zero S, both reasonably priced and plausible commuter bikes, various first-person accounts by the magazine’s staff of their encounters with electric bikes (including a run over 13,114 feet Imogen Pass in Colorado), and a one-page rundown on the Piaggio MP3 300ie three-wheeled hybrid – an odd cross between a scooter and a tricycle – and one which did not have quite the WOW factor the other cycles induced in Motorcyclist’s writers.

To end on an ironic note, the same issue features 11 threats to the future of motorcycles.  The first listed is “Excessive Sound.”  We think we see a solution.