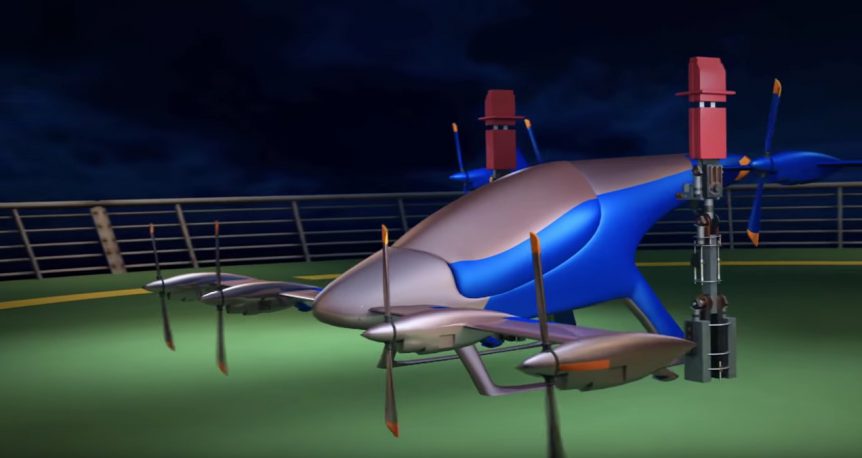 You must really be somebody when Fortune Magazine notices you’re taking a new job.  Mark Moore is indeed somebody, and remarkably self-confident in leaving a 30-year NASA career to sign on to a startup – even if it is run by Uber.  He will be Director of Aviation for the on-demand ride company, tackling the problems inherent in taking such services into the third dimension. 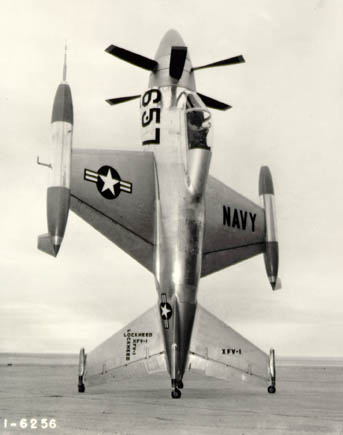 Lockheed’s XFV-1 Pogo operated much the same as Moore’s concept Puffin, but with unusual attitudes for the pilot

His decade-long work in electric propulsion for aircraft has led him to conceive of some interesting possibilities for Personal Air Vehicles, a term he engaged early.  His Puffin vertical takeoff and landing vehicle, for instance, seemed to use elements of Lockheed’s XFV-1 Pogo and Aerovironment’s Sky Tote – both tail sitters.  Ben Rich’s book, Skunk Works, details the problems pilots “faced” while trying to land the Pogo on its tail  lying on their backs and looking straight up.

Moore’s design allowed the pilot to take off and land while standing upright, and then transitioning to a prone position for high-speed horizontal flight.  The design went “viral,” garnering huge numbers of “hits” on Facebook, Twitter, and YouTube and numerous articles in the technical and popular press.

While Puffin remains a concept, other Moore projects are being turned into real vehicles, the best known being the X-57 Maxwell, with a string of 14 small, electrically-driven propellers gusting over a high-aspect ratio wing with multiple high-lift flaps to allow both slow and high speeds – while reducing operational costs by as much as 40 percent, according to NASA.  Maxwell uses Joby motors, and some of Joby’s approach to VTOL operation are seen in Uber’s conceptual renderings.

Moore’s Linked In profile helps us understand why he will probably be a good fit for Uber.  “Currently his research efforts include advanced concepts relating to On-Demand Mobility, Personal Air Vehicles, Aerial Robotics, Atmospheric Satellites, and Airborne Wind Turbines.”  That, and his work with power, control and the logistics of operating a viable transportation network will doubtless help Uber in its great leap upward.

His approaches to solving terrestrial gridlock may involve VTOL flight to pads on freeway interchanges and a structure of nodes instead of airports.  This might free valuable real estate and permit true on-demand operations – very much like the ground-bound Uber.

Mark Moore excited public interest through his years with NASA.  We can’t wait to see what comes next with Uber.