The cheese-cloth appearance looks a bit like a gauze bandage, but when sandwiched between what are alternatively described as two thin metal plates or two graphite plates can hold a significant charge much greater than that of conventional batteries or supercapacitors. 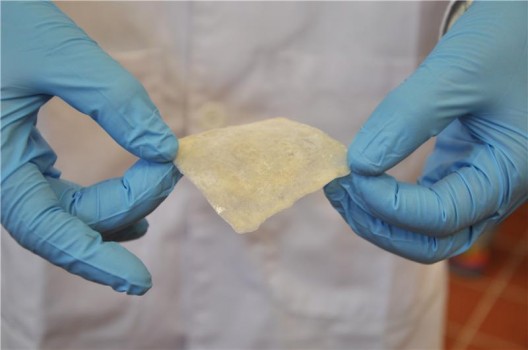 The material, developed by a team from the National University of Singapore’s Nanoscience and Nanotechnology Initiative (NUSNNI), and led by principle investigator Dr Xie Xian Ning, is capable of holding a “charge at 0.2 farads per square centimeter. This is well above the typical upper limit of 1 microfarad per square centimeter for a standard capacitor,” according to the University.

Because energy storage in capacitors is usually measured in farads, How Stuff Works calculates the following to help us understand what that means in more common, AA battery terms.

…A 1-farad capacitor can hold 1 amp-second of electrons at 1 volt.

A 1-farad capacitor would typically be pretty big.  It might be as big as a can of tuna or a 1-liter soda bottle, depending on the voltage it can handle. For this reason, capacitors are typically measured in
microfarads (millionths of a farad).

To get some perspective on how big a farad is, think about this:

10,800 tuna cans (or one-liter bottles) would take up lots of space – the bottles equivalent to 381.4 cubic feet, the volume of a minivan, and not likely to be used in small airplanes.  If all else in that capacitor
could be as capable of storing energy as the University’s new material – a big “if” – that ultracapacitor would be 1/200,000 the size, and theoretically the weight, of a traditional capacitor of the same capacity.  This would hold an AA battery’s energy in  something little more than a cubic inch in size.  Such miniaturization would have a profound effect  on electric vehicle development.

Science Daily sees the need for developments such as this in its October 4 story.

“Electrical energy storage and its management are becoming urgent issues due to climate change and energy shortage.  Existing  technologies such as rechargeable batteries and supercapacitors are based on
complicated configurations including liquid electrolytes, and suffer from difficulties in scaling-up and high fabrication costs. There is also growing  public concern and awareness of the impact of traditional energy sources on the environment, spurring a continued search for alternative, green, sustainable energy sources.”

The site notes the new material’s “cost-effectiveness in delivering energy” and its value as “an environmentally-friendly solution.”

It is also considerably less expensive than conventional energy storage devices, which use liquid electrolytes and cost $7 to store each farad.  The Singaporean membrane drops the cost to 62 cents
per farad.  New Scientist claims, “This translates to an energy cost of 10-20 watt-hour per US dollar for the membrane, as compared to just 2.5 watt-hour per US dollar for lithium ion batteries.” 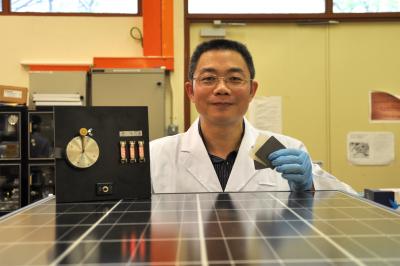 Dr. Xie claims that a simpler configuration than conventional rechargeable batteries and supercapacitors will result in lower fabrication costs.  The performance of such devices will also surpass that of existing energy storage devices.

Dr. Xie and the team spent the last 1.5 years reaching their current  status, and have successfully filed a U. S. patent for their invention.

The University is taking steps to commercialize the invention, which could be used in hybrid vehicles for instant power storage and delivery, cutting down emissions and extending battery life – although supercapacitors have a practically indefinite life themselves.

Combined with solar panels and wind turbines, the membrane storage devices could provide buffers for periods when the sun was down or dimmed, or when winds were not adequate for existing power needs.

Dr. Xie thinks the affordable and producible nature of this membrane technology will bring about large-scale applications, “and could change the current status of energy technology.”

Dr. Xie’s work can be seen in greater detail in his paper, “Energy technology: Supersizing a supercapacitor” in the journal Nature, or in “Polarizable energy-storage membrane  based on ionic condensation and decondensation”, in Energy & Environmental Science.