With over 125 electric vertical takeoff and landing aircraft in various stages of design and even flight test, we thought we would check in on three interesting prospects.

Lift Aircraft of Austin, Texas promotes its 18-rotor single seater as, “THE WORLDS FIRST PERSONAL FLYING EXPERIENCE FOR EVERYONE.”  Looking a great deal like a skinny Volocopter, the Hexa shares many of its design attributes.  It’s “… triply redundant autopilot computer with a single, 3-axis joystick is all that is needed to fly. Or tap on the seven inch touchscreen in “Look mom, no hands!” mode.”  According to the firm’s web site, one can learn to fly Hexa with a few hours on a flight simulator and a brief session of personal instruction.

If things go wrong, Hexa can maintain flight with six motors out.  Airbags and a ballistic parachute will provide a rescue.  The four perimeter floats that comprise the landing gear will help soften any impact, as well as enable amphibious operation.

Flights will be limited to eight to 15 minutes, with ground monitoring and even remote control if a pilots gets in trouble.  Saqib Shah of  Engadget describes those short hops this way: “Lift is promising flight experiences at hubs located in “scenic, uncongested areas” in 25 cities across the US. Because the Hexa doesn’t count as a “real” aircraft (it’s a “powered ultralight”) it doesn’t require a pilot’s license. However, you also can’t go past a few hundred feet of altitude or fly over populated areas. 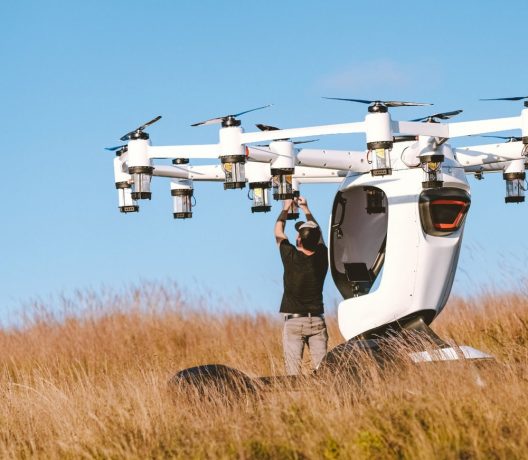 Hexa batteries plug in under each motor/rotor combination

Here’s how it will work: if you decide to fork out around $150-$200 for the experience on a day out, you’ll first have to complete a VR training simulator. Budding pilots must be over 18 years of age, up to 6 foot 5 inches in height and weigh under 250Ibs. You’ll then be able to take to the skies for up to 15 minutes at a time, controlling the drone using a joystick and an  iPad, while its onboard computer keeps it stable.”

CEO Matt Chasen told New Atlas that communities around these flight centers might have to get used to these not totally silent aircraft buzzing overhead.  Even as small and light as they are, the worries of a fairly substantial lump falling on one can bring about local resistance.  That is still an obstacle Uber and other flight services will have to confront.

Presented as YouTube video without a great deal of technical insight, this is so far a computer generated image, but with a promise to fly an actual craft on January 12.  Stay tuned.

Stefano Rivellini is a student at Valley Christian High School in San Francisco, California.  Concerned about the flailing blades on conventional multicopters, he worked to evolve a safer approach something a bit like a Dyson bladeless fan, but with applications for Uber or Amazon flights.

Stefano explains his process: “With 4 ducted fans, and some carbon fiber, I built a bladeless drone that I think is one of safest in the world. It uses 4, 90mm ducted fan propulsion units buried deep inside what I call a ‘bent tube’ propulsor. The fifth ‘leg’ is a parachute can. Hopefully I will never need it. With some help from my dad, we built the entire airframe primarily out of carbon fiber and some balsa wood.  I bought all the electronics on line and was able to design the drone so that it would operate with a standard DJI multi rotor flight controller even though it doesn’t have vertically oriented propellers. With its top mesh installed its virtually impossible to get fingers and objects in contact with the blades. I submitted a patent application for my invention. I think a drone like this could have industrial applications where a drone needs to operate close to people, objects, and in confined spaces to do inspection and other activities.
I am in the middle of applying to Aerospace Engineering schools right now so I don’t have much time to keep working on this until my applications are all in. I hope you like the video.

One thing to note: the centralized mass of motors and fans concentrates weight in the center of the machine, possibly leading to enhanced maneuverability.  Kudos to Stefano for thinking about operational safety – a prime concern if we’re to see more of these machines flying.